It’s no exaggeration to say that Game Pass is revolutionising the way that people play games, and expanding the horizons of gamers around the world. A few years ago, trying a new game would have meant coughing up a chunk of hard-earned cash – but Microsoft’s Game Pass lets you dip your toe in without having to buy the whole bath.

The selection of games included in Game Pass for PC encompasses enormously popular FPS games like Halo: Infinite, open-world favourites like Fallout 4, cutting-edge racing games like Forza Horizon 5, iconic strategy games like Age of Empires 4 – all for under $10 a month. The selection is so diverse, no matter what your preferred type of game, you’re sure to find something that you can sink hours into.

Today, huge portions of the population watch television through streaming services, and it’s not hard to imagine a similar future for the video game industry. Games are getting more and more expensive all the time (and we, the downtrodden masses, can’t always keep up financially). However, Game Pass provides a convenient and affordable way to access a vast library of popular games.

Aside from the savings compared to buying each game individually, there are many benefits to Game Pass that some gamers might be completely unaware of.

How many games are included in PC Game Pass?

One of the most appealing PC Game Pass features is its massive game library. How many games, you cry? At this point in time, there are 404 games available. In terms of hours of gameplay, that’s… well, it’s a lot.

Of course, it’s unlikely that you’d want to play every single one, but new games are being added all the time. Even if there were just one or two there that you didn’t already have and wanted to play, subscribing to Game Pass would be a more cost efficient way of doing so, but the reality is that you’ll probably play a whole load more than that.

Each month, there’s a good selection of new Game Pass games. Here’s a list of the few of the games that have been added for February, to give you an idea of what you can expect/look forward to: 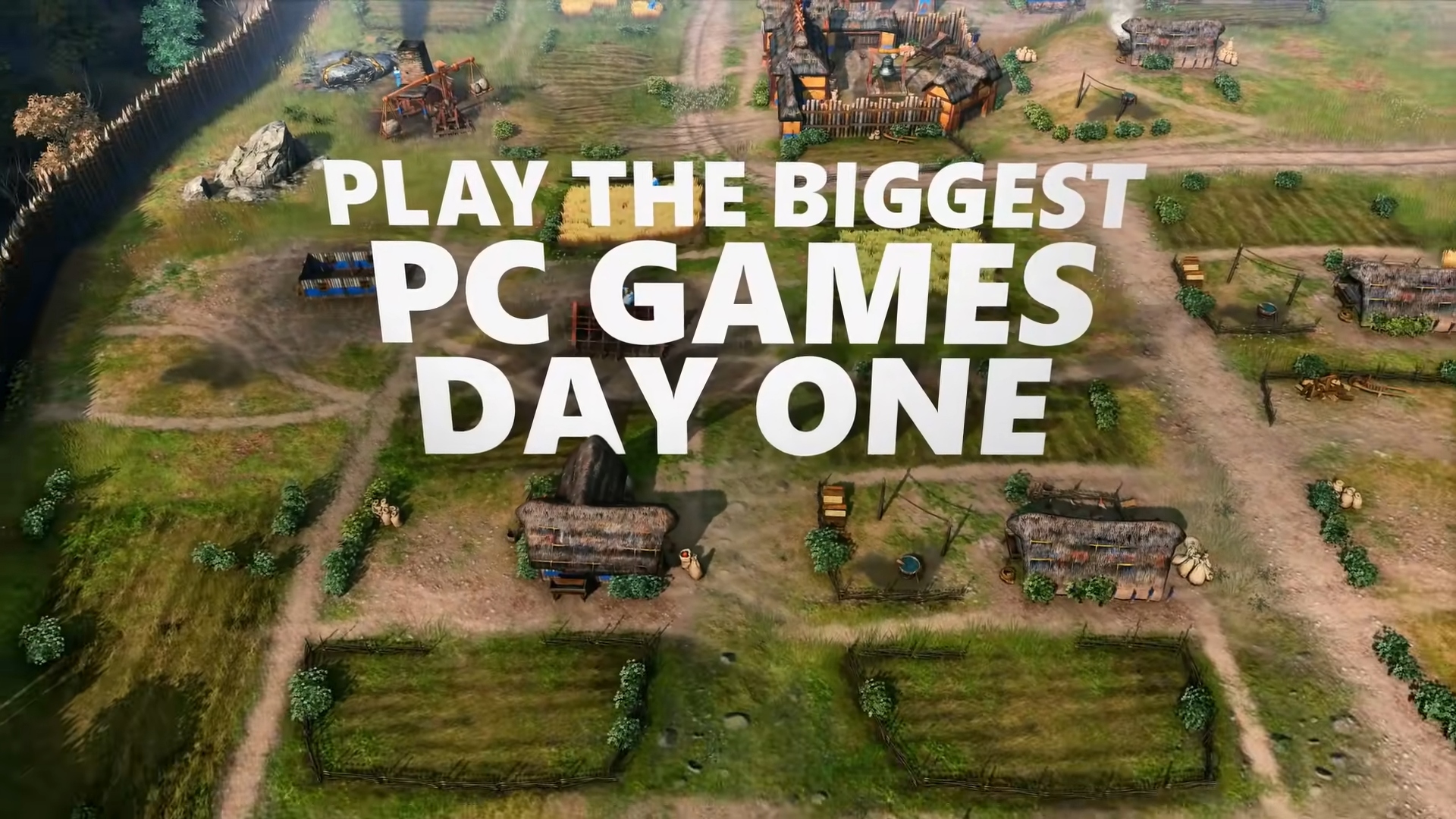 Day One access to new games via Game Pass

The selection above might give the false impression that the games that get added to Game Pass are all indie games or older titles. This couldn’t be further from the truth, because a lot of new titles are accessible on Game Pass as soon as they release. Here are a few examples:

When it comes to Microsoft-owned franchises, it’s very likely that new titles will get a day one Game Pass release. This is good news for fans of Halo, Forza, Age of Empires, anything by Bethesda, anything by Rare Ltd, and anything by Activision Blizzard.

Game Pass saves you a lot of money

Game Pass for PC costs $9.99 a month. At this point in time, there are currently over 400 games on Game Pass and at $120 to access them all for a year, that’s a fraction of a dollar for each game, and that’s without taking into account all the new games that will be added throughout the year. We calculate that it will take you thousands of hours to beat every game in the library, so when you weigh the cost against the number of hours you get out of it, you’re getting superb value for money.

People are, understandably, reluctant to get roped into more subscription services, but when it comes to Game Pass, the amount that you get out of it is so huge that it makes the cost seem utterly negligible. 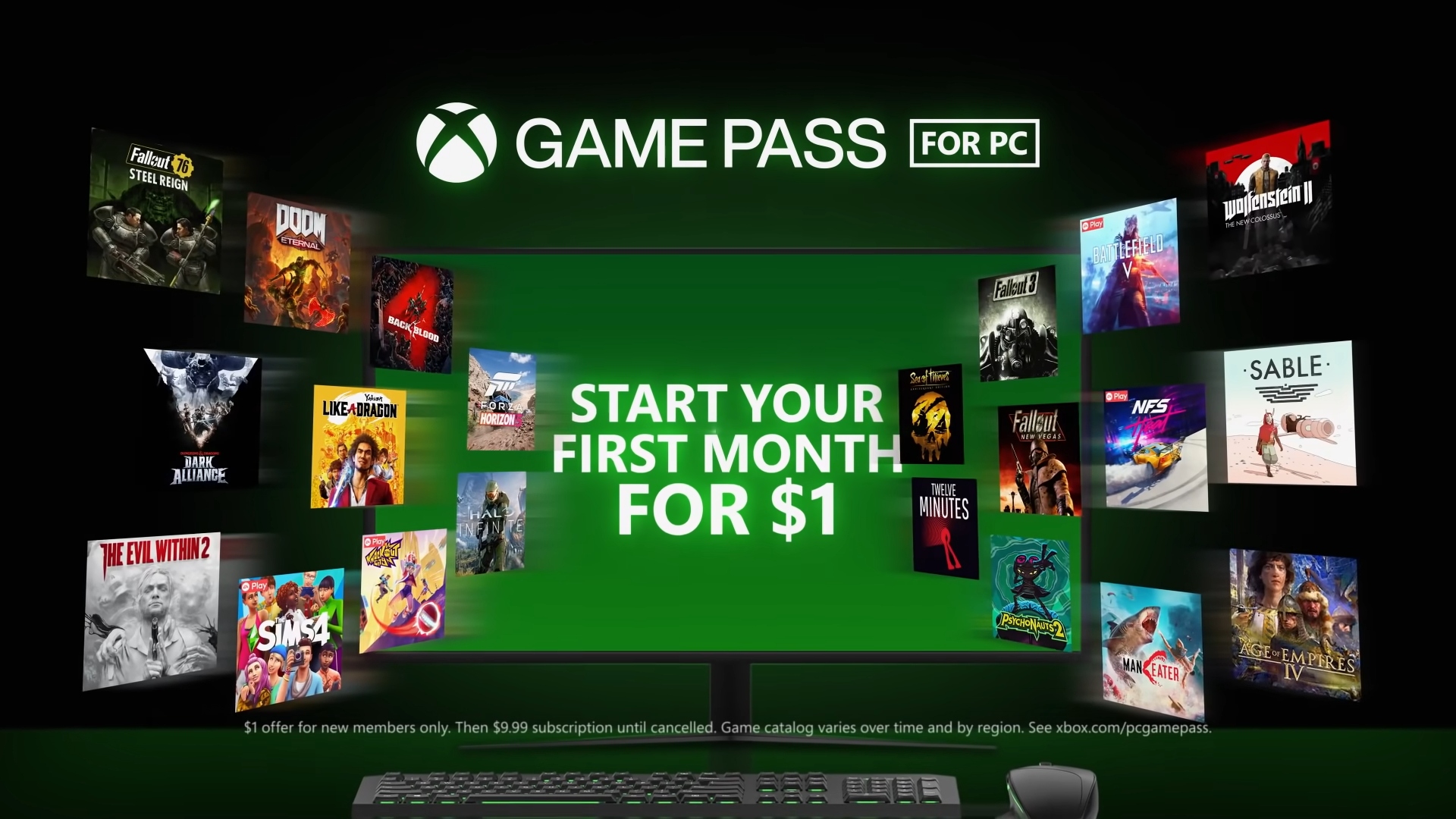 As the old saying goes, the proof of the pudding is in the eating and if you want to try some delicious digital dessert before you commit to anything, you could always try taking it for a spin for just $1. If you’ve never used Game Pass before, Microsoft lets you have the first month for the low price of $1.

If there’s one Game Pass game in particular that you want to play, then you could pay $1 for the month, finish the game within the month, then cancel your subscription before you pay any more. Meaning, at the very least, you’ll get one game for one measly dollar. No matter what the game is, that’s guaranteed savings!

When a game is available to play on Game Pass, you’ll find that all of its DLC packs are almost certainly going to be included as well. If you’ve got a game that you really enjoyed where the DLC seems just a bit too expensive, then you may find that you’ll gain access to that DLC pack with a Game Pass membership. So not only could this open the doors to some new gaming experiences, but you might find that Game Pass enhances some of the games that are already in your collection.

Game Pass isn’t just about being able to access hundreds of games (although that’s certainly its biggest selling point). What many non-subscribers may not be aware of is that when you subscribe to Game Pass, you gain access to certain perks. These are often changing, but here are a few examples of some perks you might gain access to:

So, all in all, Game Pass is quite an appealing package. A fun activity for Game Pass subscribers is to choose a random game they’ve never heard of before and give it a whirl. You never know, you could find your next favourite game like that. Either way, it’s never been easier to experiment and try new games.