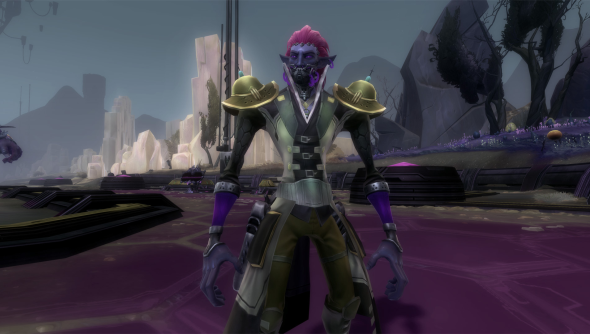 That’s something for its players, at least, who now have access to another zone, The Defile, and a new solo story: Journey into OmniCore-1.

The journey will be a fully-voiced story instance for solo players – and you can repeat it to choose every possible choice and earn more rewards.

“The mysteries of Nexus will become less mysterious,” promise Carbine of their new plotline.

Gosh, that animation’s still terribly impressive, isn’t it? Only Blizzard’s Overwatch threatens to better it.

The Defile, meanwhile, brings with it a whole host of new locations, achievements and path missions for players to gnaw at.

“The Black Focus is a great example of what small group content in the open world can be,” say Carbine. “There are hidden treasures to discover, platform puzzles, overlapping dailies, gorgeous and diverse world art, and for our group players – the chance for a battle with Koral the Defiler, the corrupt Eldan scientist looking to spread the Strain throughout Nexus.”

Last month Wildstar cancelled Christmas, and Carbine lost over 60 staff in a global bout of publisher restructuring. How do you think they’re doing at post-release support?