Blizzard broke hearts when it revealed that there’d be no flying in Draenor last year. Only ground travel, they said; go explore all the cool things that we’ve made, they demanded. Then Blizzard stomped on the shards of broken hearts by confirming that flying would never, ever be possible in Draenor, or in future expansions. You could hear the anguished screams from space.

This is the Blizzard that got rid of the Diablo III Auction House, however; the Blizzard that threw out artefacts in Heroes of the Storm because people didn’t want them. It’s a developer that has become quick to change in the face of feedback. And that’s why, eventually, you’ll be able to soar above Draenor.

It entirely makes sense why Blizzard put the breaks on flying in new areas. So much of the exploration and hard-to-reach secrets that once inspired players to spend countless hours slowly scouring MMO worlds gets lost when flying mounts get added to the equation. It’s liberating, but also threatens to the cohesiveness of the game world.

“At the heart of the initial plan to restrict flight in Draenor (even after players reach level 100) lies the design goal of providing the best moment-to-moment gameplay possible in the outdoor world,” says Bizzard. “From navigating the lava flows of the Molten Front in Patch 4.2, to breaching the Thunder King’s stronghold in Patch 5.2, to reaching the heights of the Ordon Sanctuary on Timeless Isle in Patch 5.4, to uncovering secrets deep within Gorgrond’s jungles on Draenor, World of Warcraft is full of memorable moments that are only possible when players explore the world by ground. And as we’ve continued to develop content over the years, we’ve focused more and more on providing players with these kinds of experiences.”

The problem was, and the reason that so many people were disappointed with the new no-flying policy, Blizzard was taking something away. Something awesome. It was the removal of a feature, with nothing taking its place. And there was so much to love about flying in the previous expansions. It wasn’t just a convenience, it was a new way to look at the world and, for the collectors, a whole new mountain of creatures to hunt down in dungeons and flying around zones. 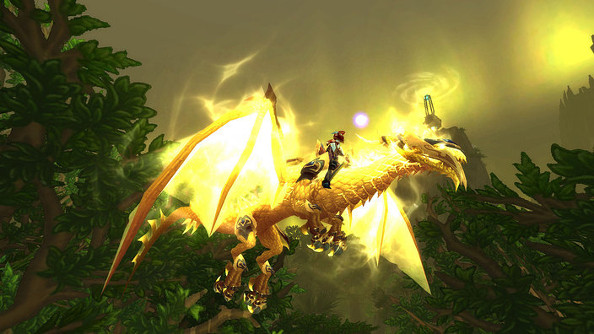 Now that Blizzard’s had time to digest the reaction to the future, or lack thereof, of flying, it’s had a change of heart. Flying will come to Draenor, but in a way that doesn’t get in the way of the more finely curated content, or the exploratory adventures that Blizzard wants players to embark upon.

So there will still be no flying until you reach level 100, and once you do, you’ll need to earn it. Flying will be unlocked with a new Achievement: Draenor Pathfinder. To get that, you’ll have to explore all of Draenor on foot, discover 100 treasures, raise Tanaan reputations to Revered and unlock a bunch of other achievements. For all this work, you’ll be rewarded with a rylak mount, and all 90+ characters on your account will be able to fly around Draenor.

“We believe this strikes the right balance between ensuring ground-based content lives up to its full potential, while providing players who’ve already fully experienced Draenor’s outdoor world extra freedom to ‘break the rules,’” says Blizzard. “This also provides a general blueprint going forward for content to come. Players will explore new and undiscovered lands from the ground, and then once they’ve fully mastered those environments—a notion that continues to evolve with each new expansion—they can take to the skies and experience the world from a new vantage point.”

It seems like a reasonable compromise. What do you lovely lot make of it?