Choosing your WoW Classic race is more interesting than it is in modern WoW. Not only are there fewer race and class combinations than in the modern game, the WoW racial abilities for each are more varied and powerful.

Over time in Warcraft, Blizzard Entertainment nerfed some racials and added new ones, bringing most classes into alignment for their utility and damage dealt. But in WoW Classic, those differences are more pronounced, meaning which class you’ve chosen can change how successful your character is.

For most classes, there is a clear best racial choice in WoW Classic. But truthfully, unless you are striving to min-max your way to a top-tier performance or strive for the best WoW Classic leveling experience, those differences are fairly small. If you truly love the lore or look of a particular race, don’t let our evaluation of the best possible combination of abilities and stats sway you; follow your bliss. After all, that’s what WoW Classic is all about. Unless you plan to raid Molten Core, and you’re an Alliance priest. Then you should pick pretty much anything else. Here are our recommendations for each race in Alliance and Horde factions. 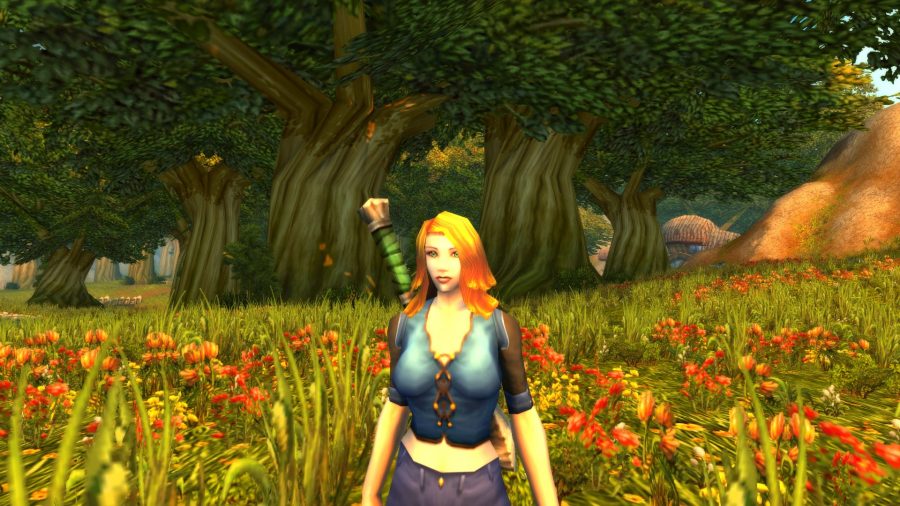 Humans have the largest number of choices among Alliance races for race and class combinations they can play. These include mage, paladin, priest, rogue, warlock, and warrior. Interestingly, this means if you want to play a hunter, which is available to nearly every race in modern WoW, you’ll need to play something else. Their racial traits are strong, though not as overpowered as some other races. Notably, they receive a Diplomacy benefit to reputation gains, meaning that if you go human, you’ll receive 10% more rep for every activity you participate in – a good deal as WoW Classic reputation grinds take roughly forever.

Other WoW Classic racial abilities include Mace and Sword specialisations, which automatically increase your skill with maces, swords, two-handed swords, and two-handed maces by 5. Perception, an active ability that ‘dramatically’ increases your stealth perception for 20 seconds, useful on PvP servers; and The Human Spirit, which increases your spirit by 5%. That last ability makes humans a terrific choice if you plan on playing a class that uses mana. Human priests also get two class-specific racials: Desperate Prayer, a self-heal on a 10-minute timer; and Feedback, which burns the mana of any creature that damages the priest while it’s active.

Given the high utility of Diplomacy in WoW Classic’s endgame, we feel humans are an excellent choice for those players whose characters use swords or maces, or who need mana (most casters) other than priests who raid. While human racials are extremely strong for priests, the specific uses for dwarven Fear Ward makes that race a better choice for raiding. 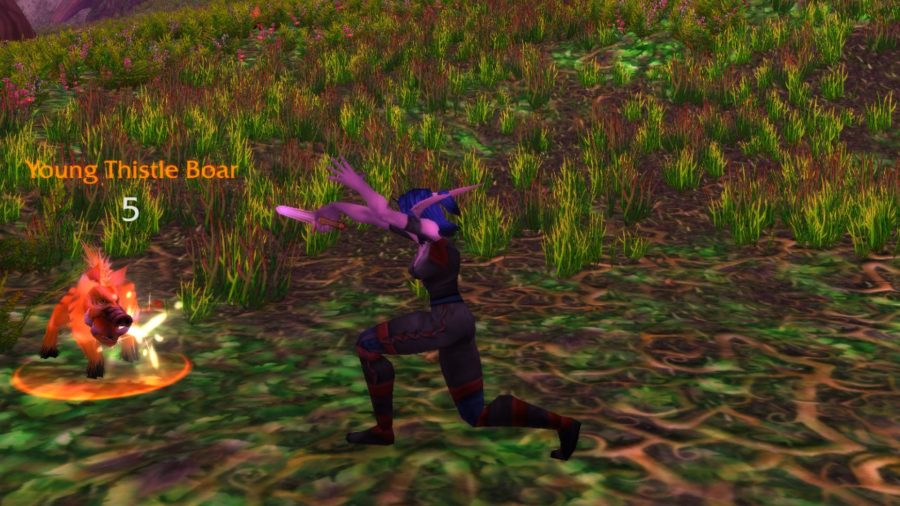 Night elves can be druids, hunters, priests, rogues, or warriors. They are the only race that can be druids in Classic, so if you want to play a druid, your choice is made. Night elves have the amazingly overpowered Shadowmeld ability, which acts a bit like rogues’ Vanish, dropping you out of combat and putting you into stealth. Unlike rogues, you cannot move without dropping stealth, but it’s a great way to stop monsters from killing you when you’re trying to run away.

Read more: The best MMOs you can play right now

Other racial abilities include an innate +10 to nature resistance. This will become incredibly important in later phases of Classic, after the opening of the Ahn’Qiraj raid instances, where nearly all damage is nature-based. Night elves also get a wisp form when dead, giving you 50% more movement speed, which is super useful in Classic given how long the death runs are, and a 1% increase to dodge. Night elves don’t get any weapons skills, alas. Night elf priests get Starshards, a damage ability, and Elune’s Grace, a damage reduction cooldown on a 5-minute timer.

Night elves are an obvious choice for druids, but we feel there are better choices for other classes. Hunters and rogues don’t need Shadowmeld as much, since they have other means of dropping aggro. Warrior tanks benefit from the increased dodge and nature resistance, so they’re a solid choice, but will rarely make use of Shadowmeld, and human racials are also strong for warriors. Priests who plan to raid should be dwarves – more on that in a minute. 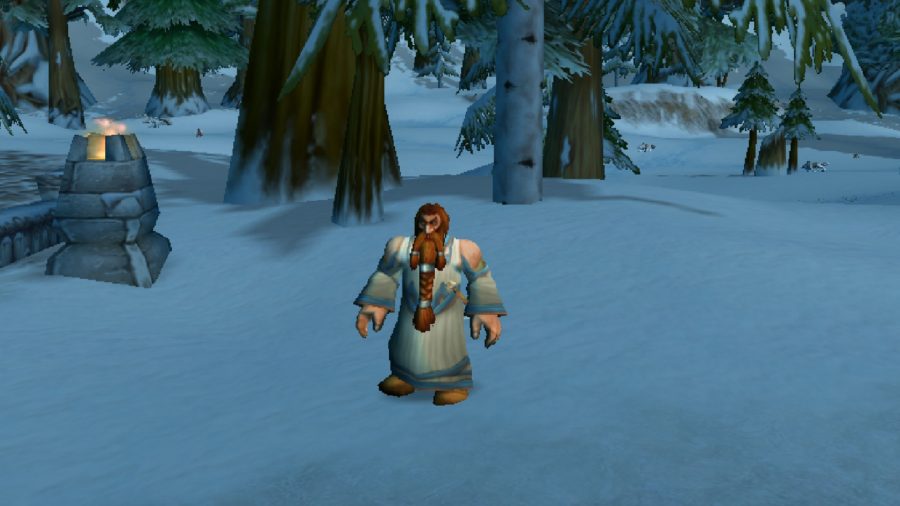 Dwarves can be hunters, paladins, priests, rogues and warriors. They can find nearby treasure on the minimap, have +10 frost resistance, 5 bonus gun skill, and Stoneform – a powerful defensive cooldown that makes dwarves immune to bleeds, poisons, and diseases, as well as increasing armor by 10% for 8 seconds. Stoneform is reasonably powerful in PvP.

The best WoW Classic racial abilities for dwarves, however, are the ones awarded solely to dwarven priests: Fear Ward, which protects a player against the next fear effect cast on them, and Desperate Prayer, a self heal. Fear Ward is especially powerful for the Magmadar encounter in Molten Core, the first big raid instance of Classic, making dwarven priests a popular healing class to bring along.

If you’re not going to be a priest, don’t plan on raiding, or PvP – we feel the humans or night elves are better choices. 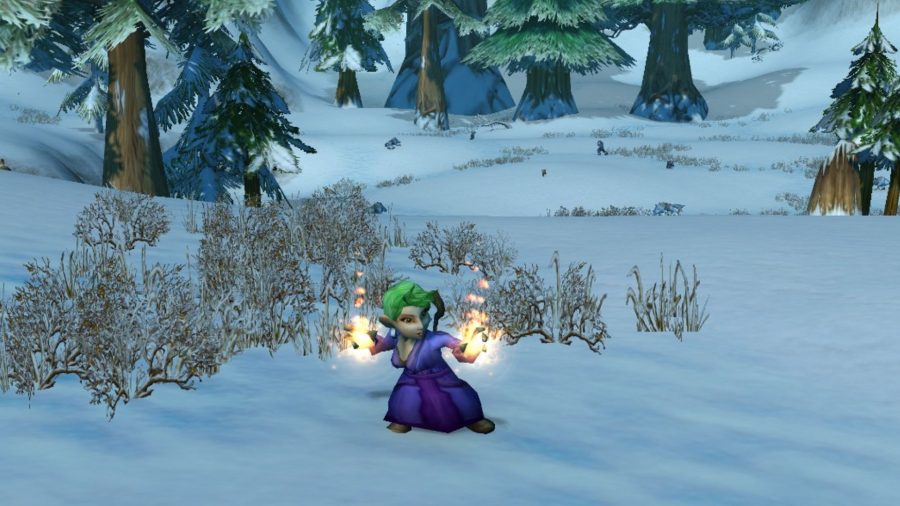 Gnomes can be mages, rogues, warlocks, or warriors in Classic, and this lack of class variety is one of the reasons why they’re among the lesser played races. For abilities, they get +10 to Arcane Resistance (not particularly useful), 5% increased intelligence (useful for mages and warlocks), +15 to Engineering skill, and Escape Artist, a one-minute cooldown that gets gnomes out of immobilization or movement speed reduction effects.

The intellect boost makes gnome a solid choice for mages and warlocks. Escape Artist is useful in PvP, less so in PvE gameplay. If you’re not a mage or a warlock, there are better choices. 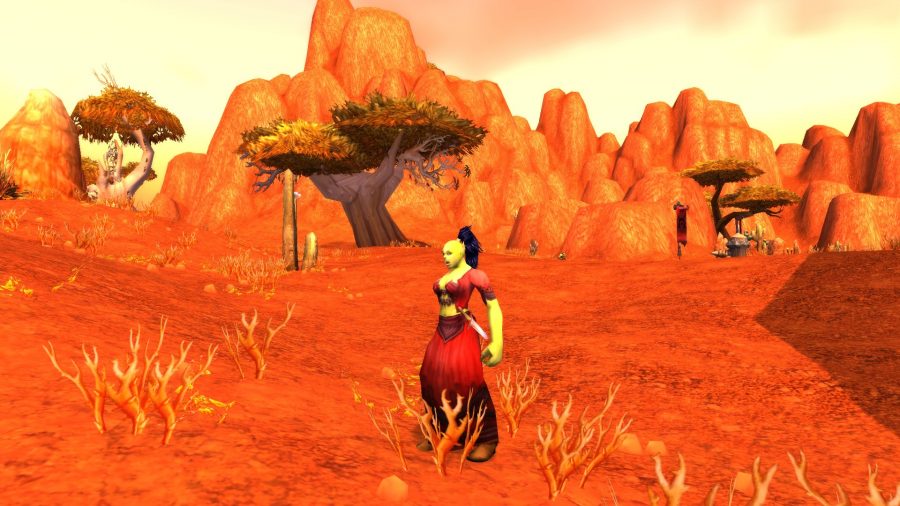 Orcs can be hunters, rogues, shamans, warlocks and warriors. They have Axe Specialization, which increases skill in one and two-handed axes by 5; Blood Fury, a powerful melee damage cooldown that also reduces healing effects cast on the orc while it’s active; Command, which increases damage done by warlock and hunter pets by 5%; and Hardiness, an extra 25% resistance to stun.

The Blood Fury cooldown makes Orcs a popular choice for melee classes, particularly in PvP where Hardiness also shines. Warriors will find orcs to be an especially good choice, thanks to the combination of axe skill and Blood Fury. Command makes orcs a solid option for hunters, assuming they keep their pets alive, and somewhat less so for warlocks – who don’t always use a pet at max level. 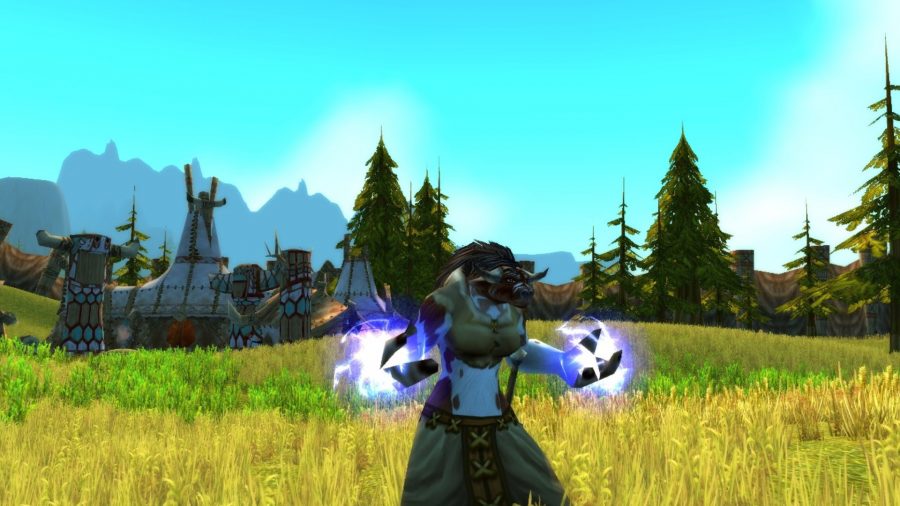 Tauren can be druids, hunters, shamans, and warriors. They are the only Horde race that can be a druid in Classic. Their WoW Classic racial abilities include +15 to herbalism skill, a real timesaver in Classic, where herbing can fail; 5% increased health, a boon to tanks; +10 to Nature Resistance, which is useful (as noted above) in Ahn’Qiraj raids when they open; and the powerful area-of-effect stun ability War Stomp.

The combination of Nature Resist, Health Boost and War Stomp make Taurens a particularly nice combination for warrior tanks. Other than that (and druids, who don’t have a choice), we think there are better choices for other Horde classes. 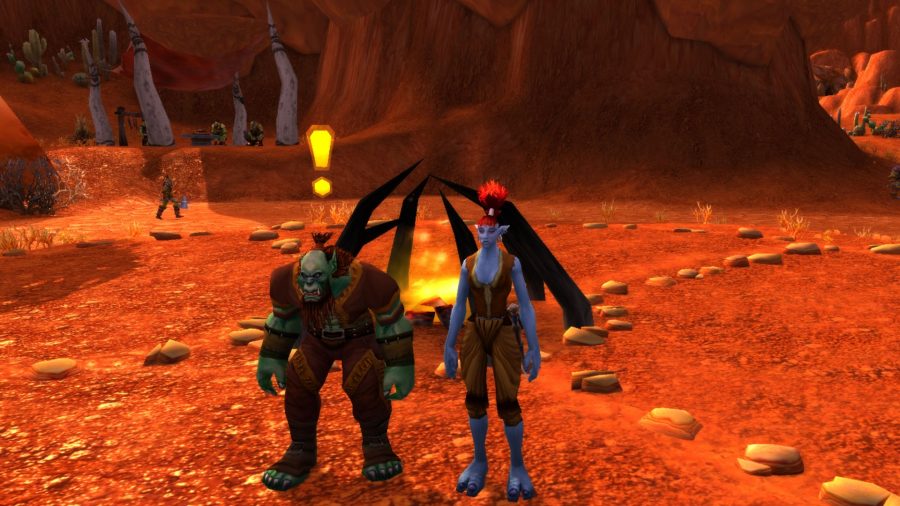 Trolls can be hunters, mages, priests, rogues, shamans, and warriors, making them the most versatile class and race combo selection. Their WoW Classic racial abilities include 5% extra damage against beasts; 5 extra skill for bows and thrown weapons; Regeneration, which increases health regeneration by 10% and allows 10% of that regeneration to occur during combat; and the powerful Berserking cooldown, which increases casting and attack speed by 10 seconds (the more hurt you are, the more it increases your speed).

Troll priests get two specific racials, including Hex of Weakness, which a debuff which reduces damage done by enemies (a very useful spell), and Shadowguard, a self-buff that causes damage when the priest takes damage.

Berserking is one of the few WoW Classic racial abilities to give one race a significant damage advantage to others in World of Warcraft, and it was one of the factors contributing originally to the slow slide that led to the current imbalance between Horde and Alliance who participate in endgame play. It is an incredibly powerful cooldown, comparatively, for damage-dealing classes, especially because it applies to both melee and casting speed, making it good for all DPS classes.

We recommend troll for any class except warrior tanks, who we think are slightly better off going Tauren. Trolls are particularly nice for hunters that use bows. 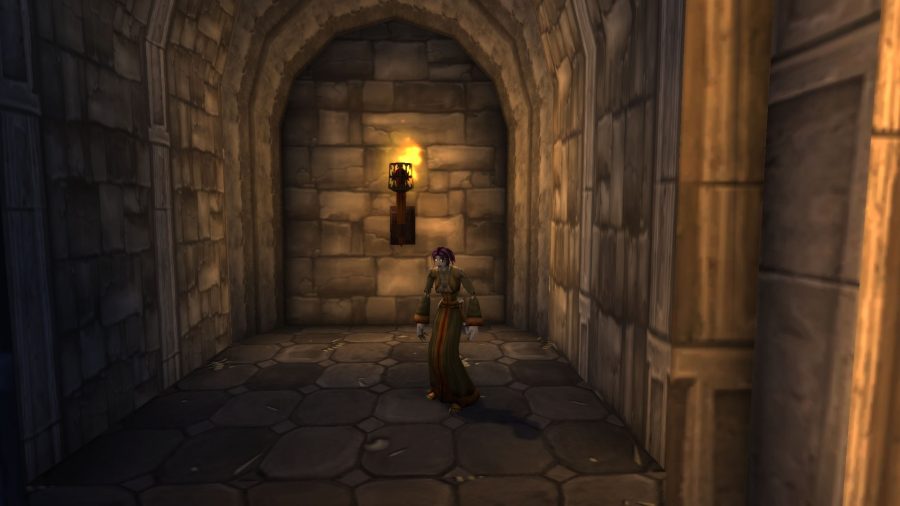 Undead characters may be mages, priests, rogues, warlocks, or warriors. Their WoW Classic racial abilities include Cannibalize, which allows the player to regain 35% of their health by consuming a corpse using a channeled spell over 10 seconds (mostly useful when soloing); +10 to shadow resistance; Underwater Breathing, which makes the breath bar while swimming last 300% longer; and Will of the Forsaken, a two-minute cooldown that makes the character immune to Charm, Fear or Sleep for five seconds (or breaks these effects if they already exist; mostly good in PvP.)

Undead priests get two specific racials: Touch of Weakness, which causes damage to monsters that hurt the priest and reduce the monsters’ damage done; and Devouring Plague, particularly nice for shadow priests, which casts a disease that causes damage and heals the priest for the damage done.

Will of the Forsaken is quite powerful in PvP, making this a popular choice among players on those servers; and the priest specific racials for undead are useful, making this a solid choice for Horde priests. Warlocks, who can’t be trolls, will find this a solid choice in PvP, though we recommend orcs for PvE. For everyone else, we recommend trolls.

There you have it our recommendations for the best WoW Classic races to choose for your favourite classes. As mentioned above, these differences aren’t game-breakingly huge, but they will make a noticeable difference in how your character plays day to day.