Looking for some Classic WoW leveling tips? Since World of Warcraft Classic launched in 2019, some late joiners to Blizzard Entertainment’s popular MMORPG have been surprised by how slowly the game moves and how much competition there is to tag monsters.

To be fair, this is a major part of the appeal of WoW Classic. Vanilla WoW is a more sedate, simpler MMO, and for some, the focus on leveling over endgame will be the primary reason to play Classic. For others, however, this represents a lost chance to get involved in the high-end PvP or dungeon/raiding scene that eluded so many when vanilla WoW actually launched well over a decade ago. For those, getting to level 60 and getting ready for the ‘real’ content is the focus.

This WoW Classic leveling guide isn’t intended to be a true speedrunning instruction set – there are plenty of those available elsewhere for that hardcore scene. Instead, these are some simple steps you can take to make the WoW leveling process as quick as possible in Classic while still being mostly painless.

DUNGEONS VERSUS QUESTING VERSUS GRINDING

In modern expansions, leveling by spamming dungeons (or in Battle for Azeroth, islands) over and over again is often the most efficient way to max level. Due to the layout of the WoW Classic dungeons, the difficulty in finding and keeping groups, and the more-restrictive dungeon lockout, that’s typically not the case when it comes to farming and fast leveling in WoW Classic. If you have max-level friends willing to carry you, spamming dungeon runs is definitely the way to go. For everyone else, a mix of questing and periodic dungeons (typically when you have all the prerequisite quests for them, which we’ll get to in a minute) is the best way to go.

New to Classic? Here are some WoW Classic tips for beginners

The good news is that Classic WoW is stuffed full of quests. Particularly if you take advantage of rested XP (leveling two characters at once is one way to help that along), you can get from 1-60 without grinding, or repetitively killing, monsters at all. That said, you can speed things along just a bit by killing monsters as you travel from one quest hub to another. 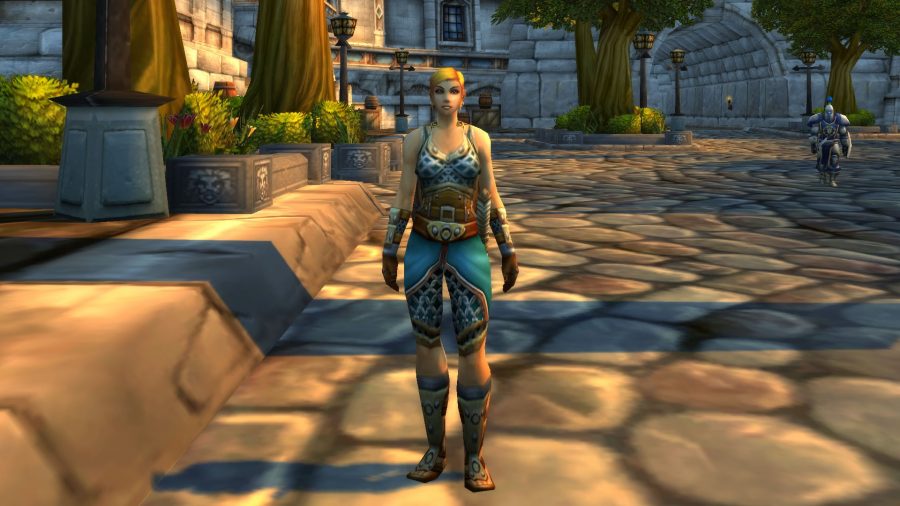 If you’re truly committed to getting to level 60 in WoW Classic fast and you don’t really care what or how you play, choose a damage class that doesn’t rely on pets. The highest damage WoW classic classes in Classic are typically those that are ‘pure’ damage – that is, they don’t have tanking or healing specializations available. Mages and rogues are good examples.

Pet classes, such as warlocks and hunters, do good damage but suffer from a bit of slowdown, both because they don’t get halfway decent pets for at least a few levels, but also because they are constantly rezzing, summoning, feeding, or otherwise having to manage their pets. Both hunters and warlocks have inconvenient abilities requiring reagents, either arrows or bullets in the hunter’s case, or soul shards in the warlock’s. This also adds to the delay.

Alternatively, you can try playing a tanking class (protection warrior or, for Alliance players, paladin are your only real choices in vanilla) and doing the ‘round up a pile of mobs and nibble them all to death’ strategy while you’re leveling in WoW. Truthfully, this works best if you’re gaming with a friend who can unleash real damage on the monsters you gather up.

GROUP UP OR GO SOLO?

For direct damage dealers, it almost never makes sense to group up in Classic WoW for speed for anything except dungeons. Every mob you kill with someone else directly splits the experience, so if you kill a monster with a friend, you’ll each get half the experience.

If you have a full group of friends, you all want to play together, and you still want to speed-level to 60, you could try and justify the reduced kill experience by noting that you’ll be getting questing experience more quickly, since you’ll be completing quests faster and moving on to the next. Realistically, there are a couple of problems with that plan: while there are enough quests in Classic WoW to get you from 1-60 without grinding, that’s only if you get the full experience from the mobs you kill. If you group up, you will almost certainly have to grind to get you the rest of the way there. Because grinding alongside questing awards more experience than just straight grinding in the same area, this reduces the efficiency of groups.

The exception to this rule is if you play a hybrid class, want to play as a tank, or play a character that is primarily healing-spec. Leveling with those classes and specializations can be brutally slow, and pairing up with another hybrid or slow-leveling class (a tank plus a healer, for example) can help move things along for both of you.

Get out of the starting zone

If you’ve checked in with the WoW Classic community or seen streams then you’ll have seen the masses of players accumulating in the starting area. That means competition for slaying mobs and generally very slow progress, so we suggest doing the bare minimum in these zones and moving on as soon as possible so that you don’t have to line up to slay mobs. 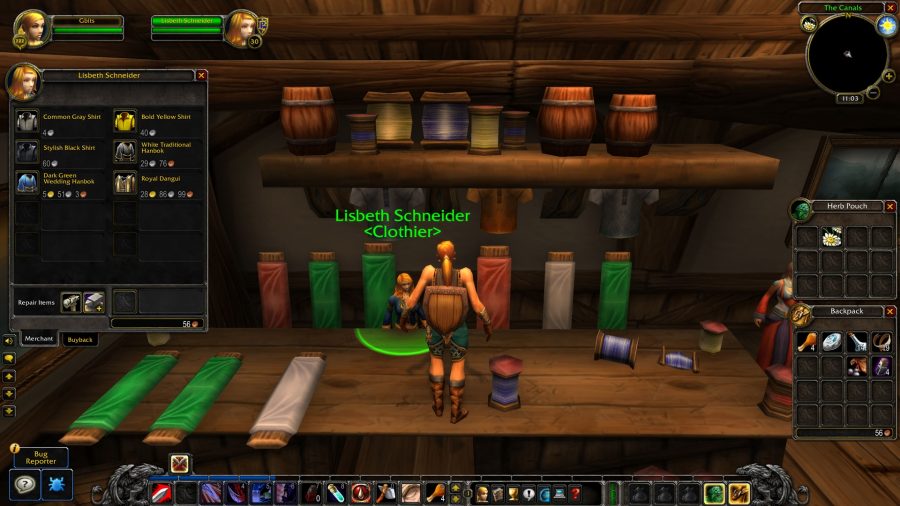 SET UP A PLACE TO DUMP YOUR STUFF

Managing inventory, particularly the host of green items you hope to sell or crafting materials you plan to use later, is a time consuming chore. Sell everything you can to any vendor you find, but for items of value, preserve them by mailing it to an alt account and selling or using it later. Create that alternate character immediately, get them to a capitol city, and park them there. Not only can you then mail anything not nailed down every time you hit town (thereby removing it from your inventory and your to-do list), but you’ll also be building up rested experience on the ‘banking’ alt.

If you’re wanting to move quickly to level 60, we also recommend waiting on crafting Classic WoW Professions until you’re done. Gathering Professions (mining, herbing) will slow you down, but might be worth it to you if you plan to level a crafting Profession later, or if you want to sell materials on the WoW Auction House to afford those oh-so-expensive level 40 and 60 WoW Classic mounts. Note that in WoW Classic, unlike Live, picking a flower or mining a metal node does not grant experience. They’re also a lot easier to move between quickly at maximum level and using one of those fancy mounts.

Typically, quest rewards and random monster drops will almost, but not quite, keep pace with the cost of your skills or abilities and little else. Spending for additional crafting materials, including dyes or threads or what have you, will eat up extra gold and time.

Weapons skills feature heavily in vanilla WoW, so you’ll be working with them in Classic. This means, as you’re leveling a character, you’re also going to be leveling their skill with whatever weapon(s) you choose. We recommend picking a weapon type, preferably something commonly available for your class and specialization, and sticking with it as you farm XP. The time lost as you miss-miss-miss-miss when you fight monsters with a new weapon is significant, and it takes a while to level a skill all the way back up to cap. This typically makes it worthwhile to wait until you get a weapon to drop of the correct variety before upgrading.

More weapons: How to get all WoW Classic legendary weapons

This advice also applies to other learned/leveled non-combat skills, such as lockpicking for rogues. Waiting until max level makes them a bit more grindy, but a lot easier to deal with. You won’t be having to kill a variety of monsters you didn’t really need to because you failed at pickpocketing. 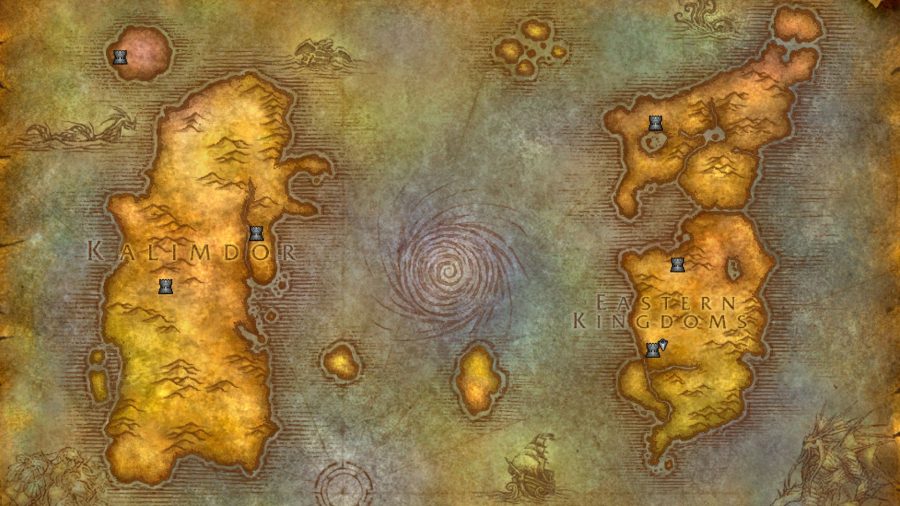 If you want to level up on a PvP WoW Classic server, absolutely create a character there. But unless you are the very fastest of WoW leveling speedrunners, playing on a PvP server will slow you down. If you truly don’t care whether you play on PvP or PvE servers and you want to get to 60 as fast as you can, choose PvE. Then the only red names you see will be the monsters, not your fellow players, who are frankly a lot smarter and a lot more vindictive than any MMO mob.

If you’re new to vanilla, it’s worth taking the time to scan leveling guides and talk to your more- experienced friends to find out the most efficient questing routes. For most players, those routes are similar to those already laid out for you by Blizzard in-game, so following in-game breadcrumbs from one quest hub to the next is a good way to get everything done. But knowing where the monsters you need to kill are actually located is a huge help, and planning your quest turn-ins so that you don’t end up doing too much backtracking is a huge timesaver in the 40 levels before you can mount up.

If you don’t have experienced friends and don’t want to follow a guide, consider a mod from our list of the best WoW Classic addons like Questie Classic, which will attempt to replicate modern WoW functionality by putting available quests and quest objectives on your map.