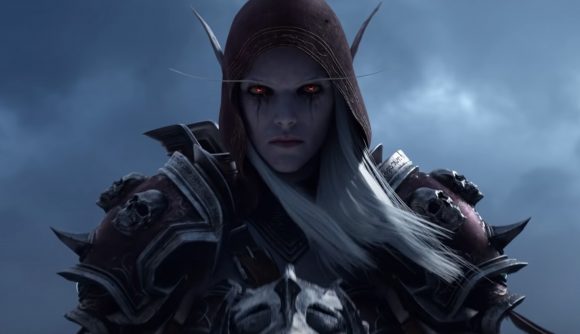 You’ll soon be waving goodbye to World of Warcraft‘s Corruption system as Blizzard is removing it in a Shadowlands pre-patch. The WoW update goes live four to six weeks before the expansion itself. That said, we don’t know when that’ll be exactly as all we know about the WoW Shadowlands release date is that it’ll be autumn, 2020.

Game Director Ion Hazzikostas explains to Twitch Streamer PandaTV (thanks, Icy Veins) in an interview that the team felt the MMORPG game is broken right now as someone could run a build with 100% critical chance. Don’t worry, though, Azerite gear and essence will still work after the pre-patch.

“Corruption is completely going away in the 9.0 pre-patch, so as soon as 9.0 drops, canonically, N’Zoth is dead,” Hazzikostas says. “We have destroyed the old god, his corruption has been cleansed from Azeroth, and we may preserve a legacy tooltip on the gear, but it’s a mix of moving the storyline forward, and frankly, the game is pretty broken right now.

“Part of why that’s been okay is that we know it’s for a short time. There’s no way to deal with somebody who has 100% crit rates and all that stuff going into new content.

“Enjoy this silly season, but post-squish, we’ll get back to a normalised space and re-tune all the contents so that people can do everything they were accustomed to doing with all your Corruption, so if you were able to do it before 9.0, you will be able to do it at max level in 9.0. We don’t want to change any of that. Essences and Azerite Armour will continue to work.”

You can catch the full interview on PandaTV’s Twitch channel.

We got to try some WoW Shadowlands gameplay for ourselves last year and were left feeling excited for what was to come. If you’d like something to spice up your World of Warcraft experience while you wait, why not try out these WoW addons? GTFO is a personal favourite of mine.

If you’re looking for something else entirely, though, then our new PC games list will point you in the right directions. Or, maybe our best MMORPGs list is more your thing if you want something like World of Warcraft.