World of Warcraft’s core UI is functional, sure, but it often lacks a certain something special. Ask anyone who has been mocked for using it after their party found out and they will tell you exactly where it falters.

The default UI doesn’t provide you with enough information at a glance during a raid, it’s too large on the screen so that it takes up to much screen real-estate, and it can be really clunky with all the windows popping up everywhere which you aren’t able to better arrange.

Fortunately, expansive add-on support fills that gap, providing you with thousands of different options for how you want your game to look. Some add-ons are aimed at avid raiders, while others tackle those all-important professions. With so many options, it’s tough to know what add-ons are worth your time. We’ve dug deep and tracked down the best of the bunch for general, all-purpose use. Each add-on will make your World of Warcraft experience far more pleasant, whether you’re a raider, tradesman, or simply keen to level up fast.

For installing and tracking these add-ons, we recommend the Twitch desktop app for PC or MacOS. This handy app, which came to Twitch from the folks at Curse, tracks all your WoW add-ons and whether updates to them are available.

Here is a list of the best World of Warcraft addons: 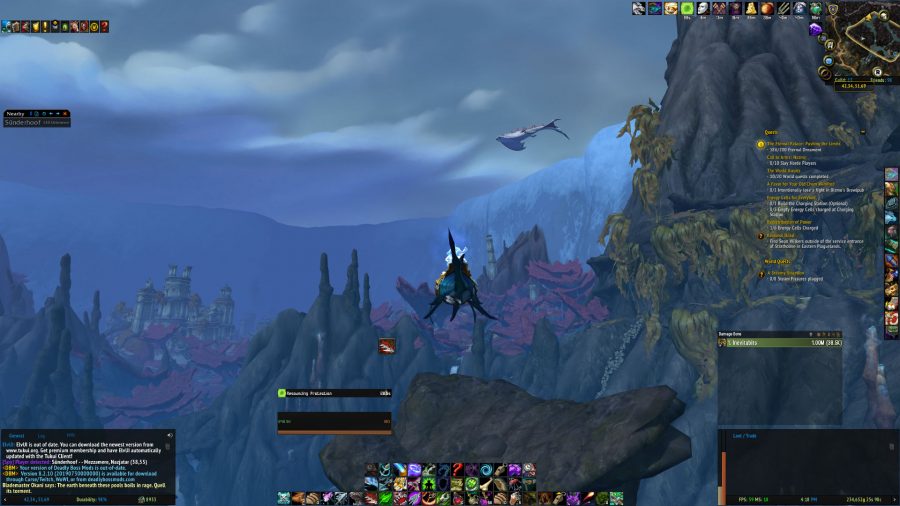 One of the most popular all-in-one add-on collections, ElvUI earned its unique status as one of the best WoW addons. It provides a sleek revamp of the entire default WoW user interface, combining many of the most popular improvements to spell bar placement, inventory view, frames for your raid members or opponents, and basic utility like the ability to sell all “grey” items or perform repairs automatically. It automatically configures your display based on your role (tank, ranged or melee dps, heals), but provides easy options for changing configurations, moving windows, binding keys, and a host of other tweaks to display and function.

Text windows are helpfully divided between chat channels, and loot and other screen-scrolling information. At the bottom of those windows and your mini-map, tiny configurable status displays tell you everything from how many War Resources you have to what your durability is at to how many free bag spaces you have left (currently zero, of course, given the huge array of bag-hogging items from Battle for Azeroth’s patches.) They can also give one-click access to your bags, your guild, or your friends list.

ElvUI is updated ridiculously often. Unlike most WoW add-ons, this package can’t be added to your Curse/Twitch list; instead, you’ll need to update separately. There’s a paid client to do that automatically, but the ElvUI collection is available to install manually for free. 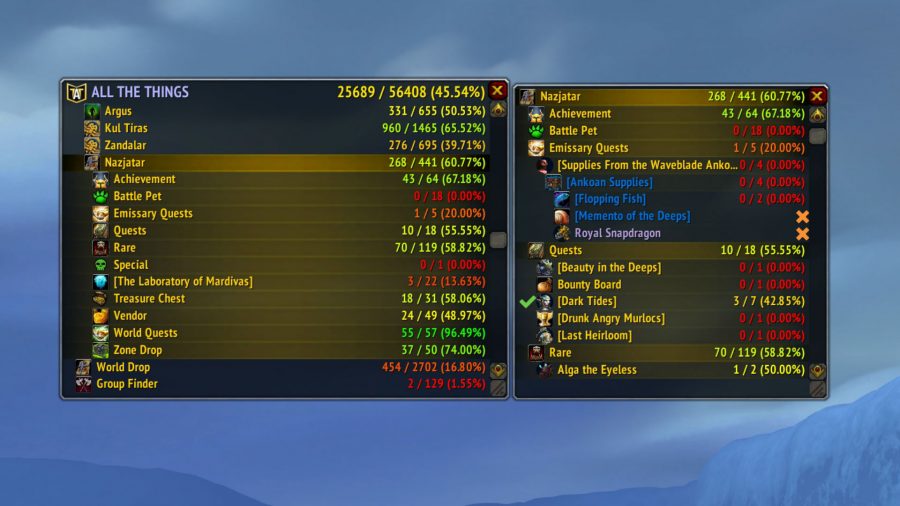 Want to track those achievements, rare kills, items, treasures, pets, transmogs, or anything else you’re missing – and display them by the zone or area you’re in? The All the Things WoW addon has come to your rescue. It identifies everything you’re missing and presents them to you in one simple interface, allowing you to feed your inner Warcraft completionist obsessive.

The mod gives you a nice heads up for game content you might be missing, and also provides extra tooltip information about the things you’re collecting. A fanfare of chimes announces when you’ve collected or lost new appearances, pets, or items. All the Things is a must for Warcraft collectors, and a fun add-on for most players.

Separate databases keep All the Things from slowing down your gameplay, too. 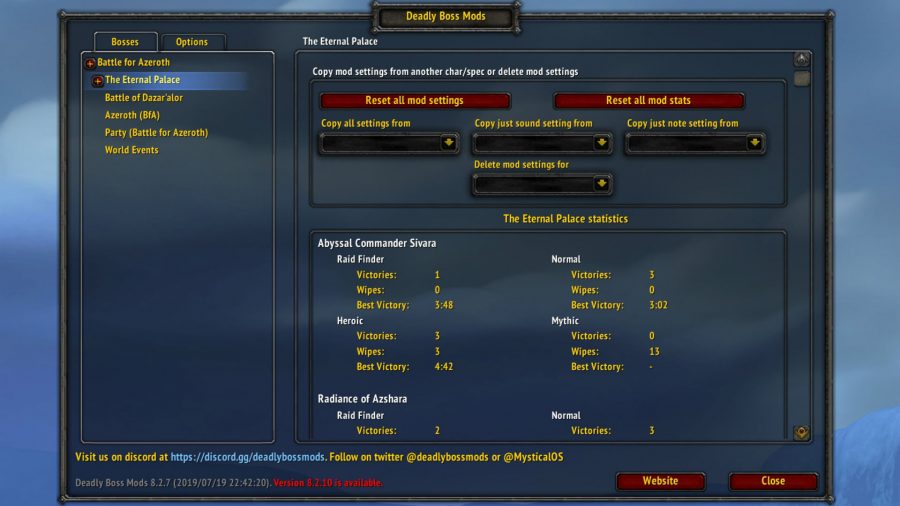 For five-man dungeons, Deadly Boss Mods is a great quality of life improvement, giving you warnings about important things – the boss is about to use a spell, you need to interrupt that mob’s cast to save your buddy – and generally acting as your gameplay guide.

For raids, DBM is essential, helping you to navigate tricky boss mechanics, giving you timers for when important events are coming in a fight, and generally giving you advance notice about all the things you need to do to keep your groupmates from yelling at you.

DBM is our choice because of the funny choices in its sound files; for example, a mechanic that makes you scatter from your teammates is typically accompanied by the Karazhan’s Big Bad Wolf yelling at you to “Run away, little girl, run away!” If you find that obnoxious, BigWigs Bossmods is another solid choice with less whimsy.

If you like DBM you can support its creator via Patreon (the link is on the page. 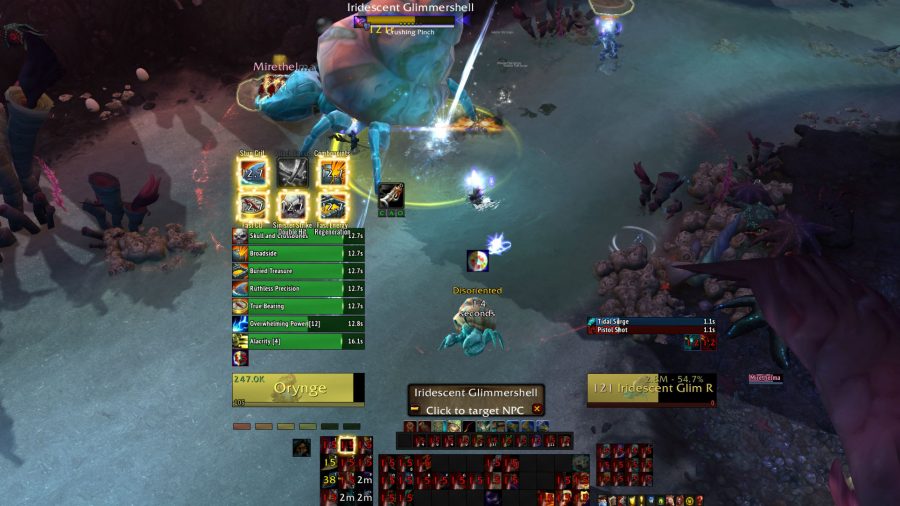 For beginners, you might consider using TellMeWhen, which is perhaps the simplest, but still fully-featured version of these mods out there. For everyone else, the go-to is Weak Auras. Creating a new notification using a template is relatively easy, but the reason to use this over other mods is the huge array of pre-built notifications, trackers and simple quality-of-life doodads that have already been built by other people.

Want something that tells you in no uncertain terms what your “decrees” from Queen Azshara are in Eternal Palace? Something that tracks when the interrupt abilities of your party members are on cooldown in five man dungeons? Something that tells your party what Mythic Plus dungeon key you have so everyone can decide where you want to go? There are Weak Auras already made for all of those, plus collections for pretty much every class and specialization. Find a pile at wago.io after you’ve installed the mod. 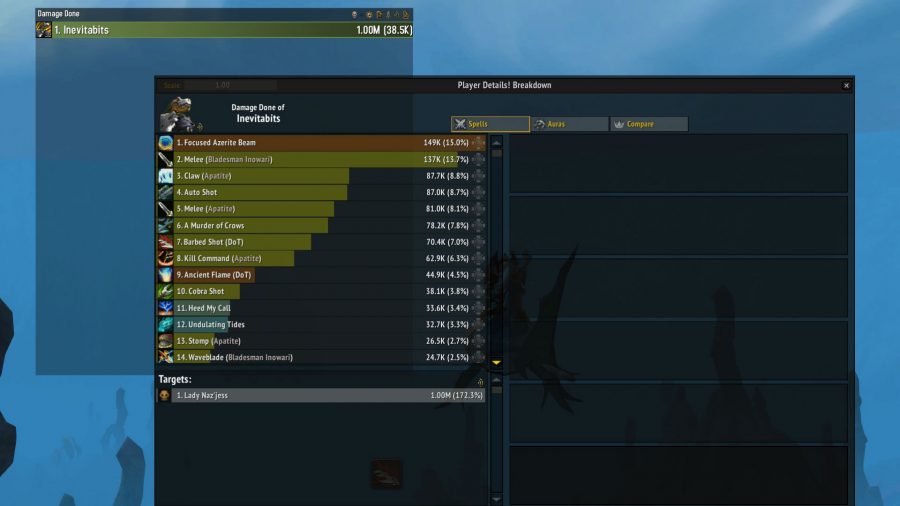 There are plenty of damage and healing counters out there, but Details! is our favorite for its flexible displays, intuitive handling of things like pet damage, and lightweight installation. This mod allows you to track your damage or healing output (including absorbs like shields) based on the spells you cast and the abilities you use, how they hit your opponents, and how you compare against your group.

We especially like the ability to mouse over individual players to quickly glance what they’re casting and why they’re doing bigger numbers than you are. You can easily see segments like a single boss fight, or totals for an entire dungeon. 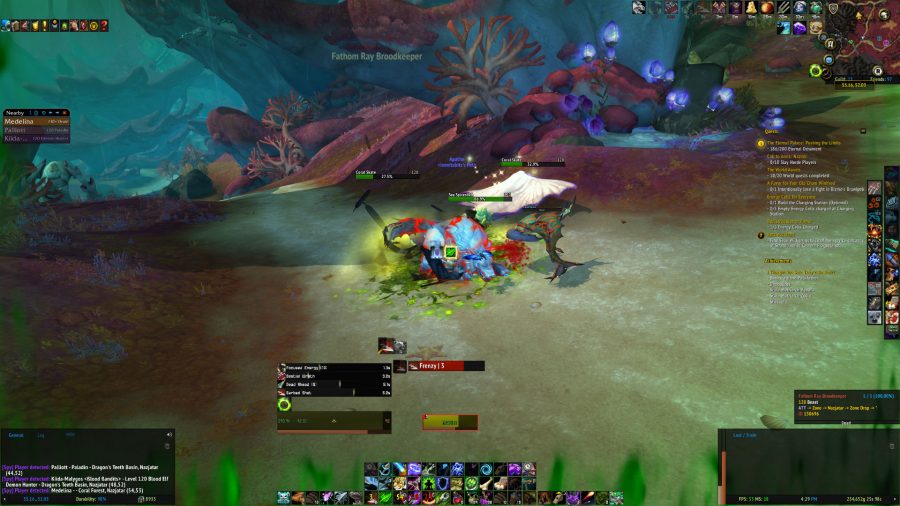 Simple, lightweight, and a shortcut to looking very smart in groups. This is largely an audio addon (though visual warnings are possible with integration with Weak Auras or Power Auras Classic.) But if you look at the screenshot above, where we’re standing in green gunk, you can picture the alarm merrily blaring away. 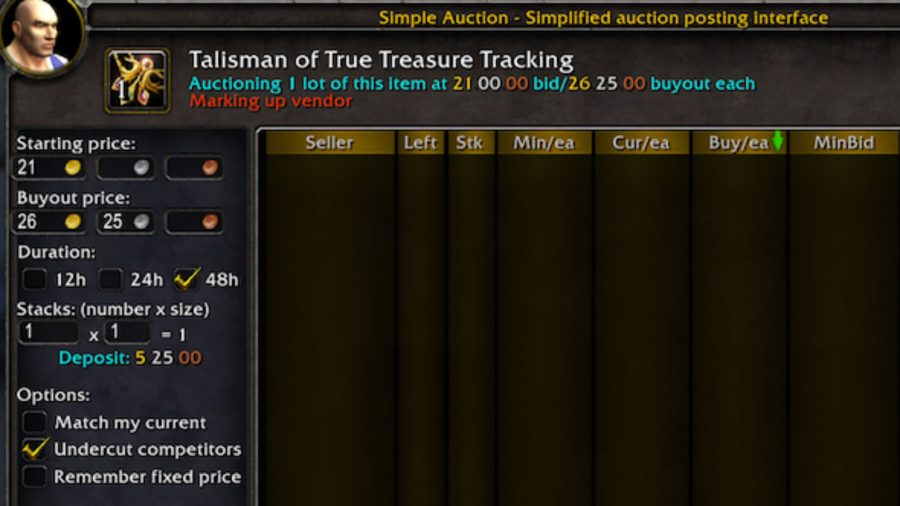 There’s a lot of money to be made via the WoW auction house – if you know what you’re doing. Auctioneer goes some way to streamlining the process. This addon for WoW effectively appraises items, providing you with an intelligent price to sell a product for, making it easy to undercut others in the auction house.

It doesn’t stop there, though. The Auctioneer suite also tracks your bidding, postings, and mail, making it a breeze to list plenty of items at once. There’s also extensive support for enchanting, with figures available for disenchanting as well as selling enchantments. Used correctly, it’s quite the moneymaker, while saving you the effort of completing market analysis yourself.

If you really want to feed your inner goblin, TradeSkill Master is the state of the art for tracking and placing auctions, undercutting, combining raw materials from the auction house into items that sell for more, and the like. It comes with its own desktop app for maximum gold-making analysis, and requires separate download. It’ll identify good deals currently posted for sale and tell you what things should be worth. Using TSM correctly is a skill unto itself, so we don’t recommend it for beginners. 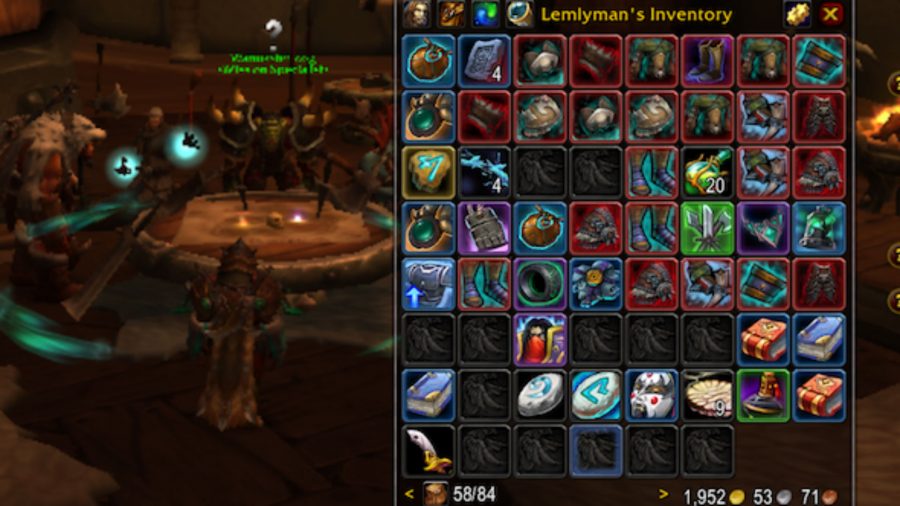 Keeping an eye on your inventory is a complex business once you own a few large bags, or you have multiple characters. Bagnon is a lifesaver in this context. Instead of having to view items bag by bag, it collates all your items together in one simple-to-view inventory screen.

Each item has a different colour assigned to it, depending on item quality, and there’s an intelligent search engine, too. This means you can see at a glance what’s going on inside your bags and that makes it easier for you to tidy them up.

Going one step further, the WoW addon also shows what all your characters possess, from how much gold they own to if certain items are duplicated across multiple characters. If you’re trying to move possessions from your main to an alt, it’s the perfect way to keep on top of everything. 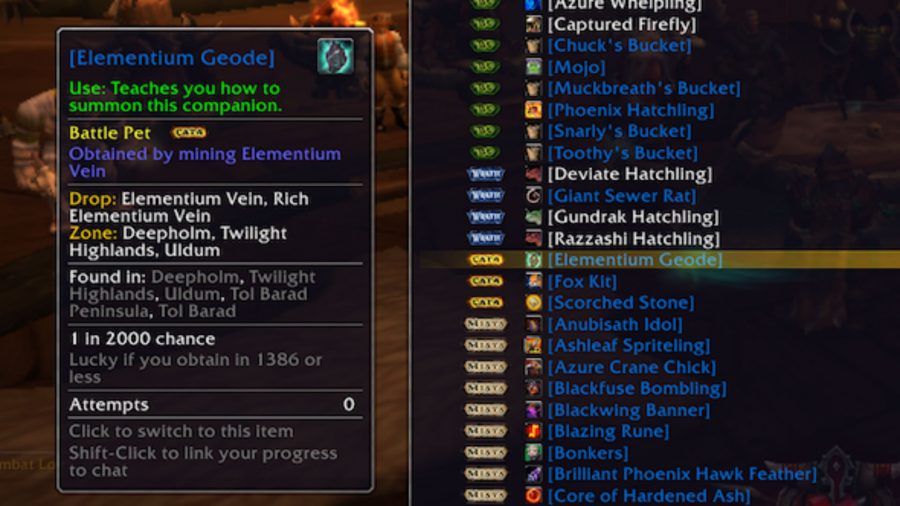 Finding a rare item drop is immensely satisfying, but often it can be quite frustrating, too. The Rarity addon for WoW acknowledges that you want to know what the odds are of getting a good drop, tracking how many times you’ve tried to obtain everything from mounts to toys and battle pets.

In each case, it tells you how likely you are to obtain the item, tracks how long you’ve been trying, and determines how lucky you’ve been so far. No longer do you have to question whether you’re actually making progress. You’ll have a proper idea of your chances through statistical analysis. Basically, it’ll keep you sane.

Due to a change in the way Warcraft handles looting, Rarity does poorly at tracking items that drop from mobs that come in groups or drop nothing at all. If they drop gold, you’ll get the correct count; if they don’t, that ‘attempt’ won’t register.) Still, it’s a useful tool. 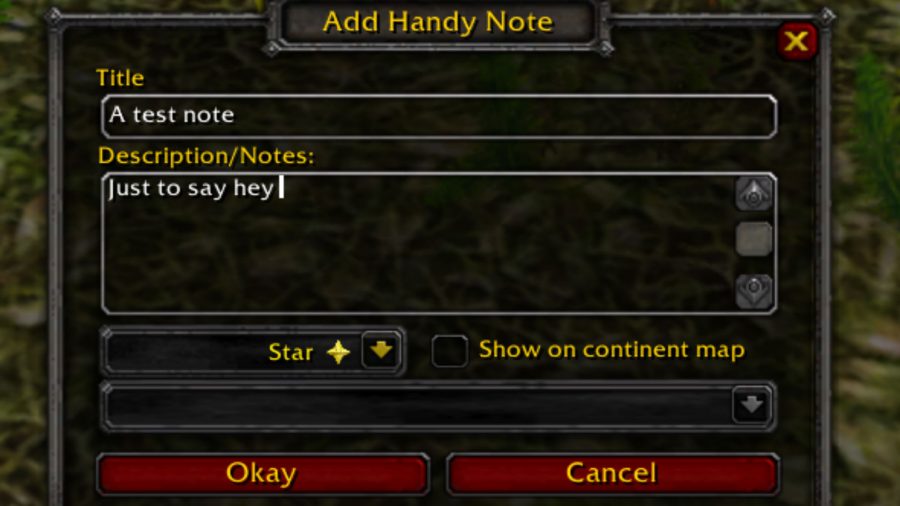 World of Warcraft’s map is fairly good at showing you where you need to go, but it’s not perfect. HandyNotes fills an important gap in the form of being able to add notes as you go along. A quick alt-right click on the world map lets you type in whatever you need to remember. More importantly, published collections of HandyNotes allow you to keep track of everything from the locations of treasure chests in Battle for Azeroth to the location (and whether you’ve killed them!) of rare creatures in Nazjatar or Mechagon.

As a result, HandyNotes is great for keeping track of locations such as secret entrances or even particularly scenic spots for light roleplaying. Prepackaged HandyNotes collections are their own WoW addons, but they all require HandyNotes to run. We highly recommend the Battle for Azeroth Treasures collection, and Nazjatar or Mechagon by TomCat’s Tours. 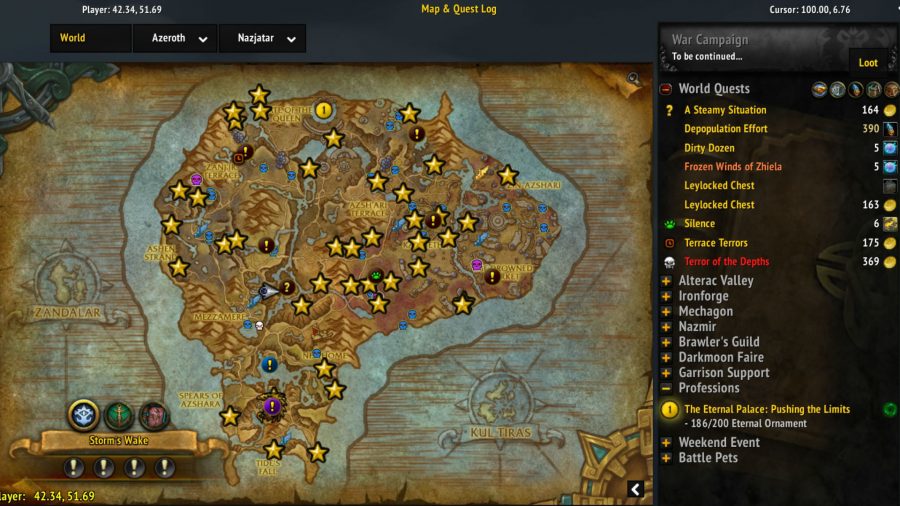 World of Warcraft: Legion brought with it World Quests – special temporary daily and weekly quests for maximum level characters. The problem was that World of Warcraft’s UI did a poor job of highlighting them and making them easy to track. Angry World Quests does the job for Blizzard, tracking quests in previous zones as well as those in Battle for Azeroth.

It lists quests directly on the world map, showing what the rewards will be and allowing easy filtering for quests that fulfil today’s emissary requirements and those that award gold, Azerite power, loot, or War Resources.

Sadly, Angry World Quests hasn’t been updated since 2018, but it appears to still work fine for now. If you’re looking for an alternative, we’d recommend World Quests List or World Quest Tracker, both of which offer similar functionality.

That lot should keep you going for a while. Enjoy the copious amounts of convenience we have just bestowed upon you.