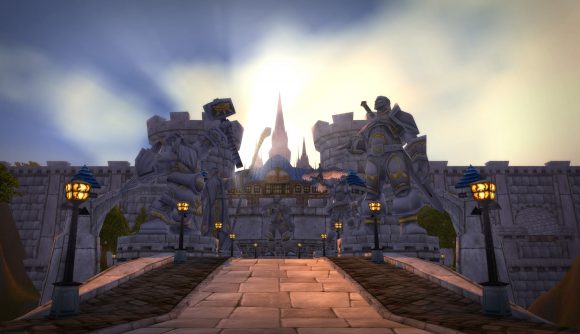 Stormwind’s city guards and citizens are now a more diverse bunch. A recent update to World of Warcraft: Shadowlands‘ beta implemented a change to reflect greater representation in Azeroth through more customisation options and new appearances for existing NPCs.

That comes from Wowhead, which reports that Blizzard has introduced more skin tones for male and female Stormwind guards. You’ll also notice that various vendors and civilians around the city – like Naomi, Larimaine Purdue, Suzanne, Stormwind Fisherman, and Allison Potts – have new appearances to continue the theme.

We knew this was on the cards for a wee while. Back at a WoW: Shadowlands press event, Wowhead asked art director Ely Cannon if NPCs past and present would receive customisation options to reflect the diversity options available to players. “As with any tool we have available with us, designers will make use of it for current or future content,” Cannon explained at the time. “That may include going back to the old world, when new vendors are added, and customising and updating some of the old NPCs in the world.

“But it depends on the time involved and what our bandwidth is. Our focus is always on the next expansion and the content coming up to provide the best possible game, but certainly having those available gives our designers a lot more to work with, and I would expect to see more of that diversity and customisation represented in the world going forward for sure.”

WoW Shadowlands’ release date is only a month away, and we’re getting a bunch of teases to ramp up the excitement. Blizzard has already released three of four video shorts to provide some backstory to the world, with the most recent one focusing on Ardenweald.

If you want to know what’s coming and going, then our WoW: Shadowlands changes guide will get you clued up.