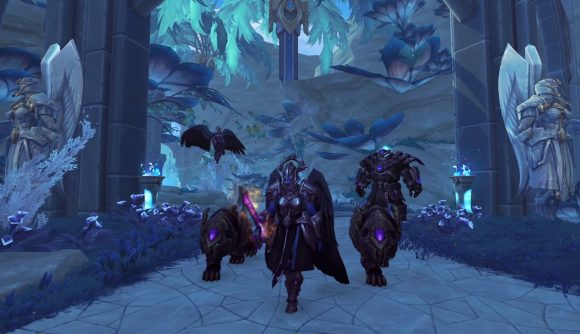 World of Warcraft is absolutely stuffed with pop culture references and easter eggs. We’ve seen many familiar faces pop up in the MMORPG from Final Fantasy VII’s Cloud and Aerith to characters from Friends and Zoolander. Now we can add The Witcher’s Geralt of Rivia and Dandelion to that list.

While playing the Shadowlands beta, WoW players swiftly stumbled across a homage to the pair in the new Ardenweald area. That particular realm was founded by the Winter Queen and is inhabited by the Night Fae Covenant. Basically, it’s a mystical place where gods and spirits gather after death, so it makes sense that you’d find the two there hunting for monsters.

The first nods to The Witcher come through the character’s nicknames. As MMO Sanker notes, instead of the White Wolf we have the Winter Wolf, and instead of Dandelion we have Daffodil. If you approach them you’ll get a side quest to help them hunt down a monster. The Winter Wolf is notably uninterested and wants to be left alone, while the butterfly bard is keen to accompany you.

As you search for the monster, the travelling musician sings you a song that, ironically, draws the beast out:

“Oh Daffodil, oh Daffodil. He’s the best! Not like his partner, who only wants to rest! Leave it to Daffodil, the brilliant poet, not that big oaf, everyone knows it! Where is the beast? Where could it be? If you won’t help, then leave it to me! Have no fear, you crass buffoo – eh? I, uh … Gwynceirw? I think I found something!”

Once you’ve slain the monster, Daffodil offers to sing you another song as a reward which he calls “toss a seed to your hunter” – brilliant. The whole side quest appears to be a reference to The Witcher 3 and Netflix’s The Witcher TV show, but it’s still cool to see considering The Witcher 3 has a reference to WoW, too.

The WoW Shadowlands release date isn’t quite here yet, but plenty have been ploughing through the beta. If you’d like to spice up your World of Warcraft gameplay while you wait, then these WoW addons will keep you occupied.