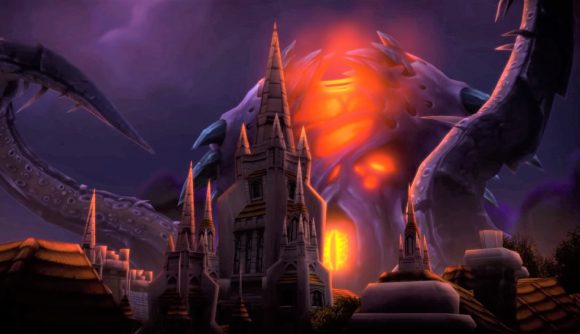 World of Warcraft’s 8.3 Visions of N’Zoth update is here, and with it a raft of new content. The old god’s invasion of Azeroth brings an activity called Assaults, bosses to best, and a new challenge system named Horrific Visions, but also an interesting twist. New mechanic Corruption will have some devastating effects on your character’s sanity – but also your allies’, meaning you might need to dispatch them yourself if it takes a hold.

That’s according to Michael Bybee, senior game producer II at developer Blizzard, who has talked to PCGamesN about the new Visions of N’Zoth content and this intriguing (and eerie) new mechanic. “One of the things that players are going to see this time is some of their allies who have been corrupted by N’Zoth. They may have to fight to save them, or maybe ultimately end them, because there’s no hope of saving them”, he explains.

While Bybee says players will need to “wait and see” how the new storyline plays out in the game, “one of the interesting things there is that you’re actually fighting the allies that have been helping you along the way during this update, and in previous events in Battle for Azeroth”. Gulp. Everyone feeling ok?

This ties into the patch’s new 12-boss raid, Ny’alotha, which sees the sleeping city at the heart of the Black Empire awaken and N’Zoth’s armies invade. The raid, which ends with you tackling the ultimate boss, the old god N’Zoth himself, is where Corruption mechanic will come into play. Alliance or Horde, it looks like you’re going to have to keep a pretty close eye on your pals for signs of corruption. Gulp.

If you’re keen to hear more about WoW patch 8.3 Visions of N’Zoth, keep checking back as our full interview with Michael Bybee and Steve Danuser, lead narrative designer on World of Warcraft, will go up next week.

You can also check out our list of the best MMORPGs out there if you’re a WoW fan and are keen to try something new in the genre.