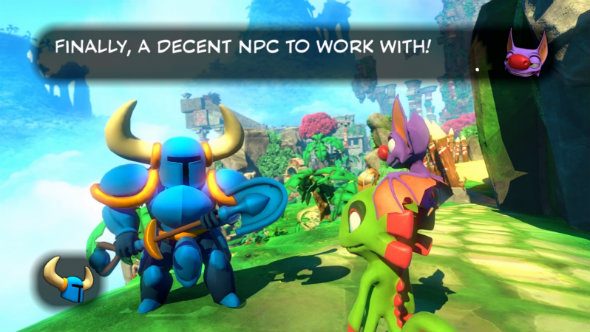 Shovel Knight is making a cameo in Yooka-Laylee, Playtonic’s upcoming 3D platformer. As you’d expect from a studio made up of ex-Rare developers, the game is already filled with a cast of weird and wonderful characters, but I can still dig some fourth wall-breaking conversations with Yacht Club Games’ armoured hero.

Keep your finger on the gaming pulse with our list of upcoming PC games.

Shovel Knight will be on-hand in Yooka-Laylee to dole out quests along with a cloud called Nimbus, a trouser-wearing snake called Trowzer, a minecart called Kartos, a vending machine duck called Dr. Quack and plenty more.

The new trailer shows off these quest givers, item suppliers and even the nefarious and sinister Capital B, the game’s big boss.

Shovel Knight is no stranger to cameos in indie games, having busted moves through dungeons in Crypt of the NecroDancer, Road Rashed his was through Road Redemption, and shown off his culinary skills inCook, Serve, Delicious: Battle Kitchen, along with many more.

See what he looks like in Yooka-Laylee below, and if you’re wondering how it’s shaping up, have a read of our Yooka-Laylee preview.