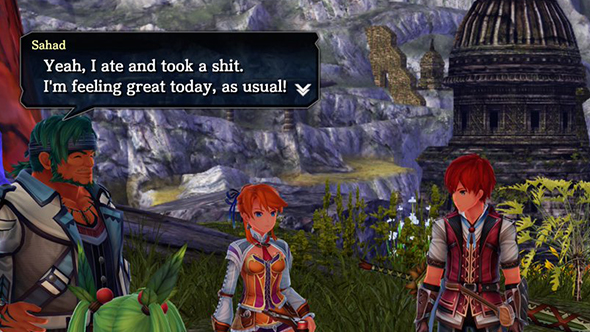 The recent Western release of Ys VIII has been well-received by fans of the long-running RPG series, but there’s been one significant issue. The English wasn’t great, and the screen unhappy players are circulating might just make you nostalgic for the days of spoony bards with no chance to survive.

Players were in such an uproar over the translation that they started a campaign to push publisher NIS America for a change, and the company has responded by saying they’re going to make a change.

“It has come to my attention that the quality of the Ys VIII localization has not reached an acceptable level by our own standards, but most importantly by yours,” says company boss Takuro Yamashita. “As president of NIS America, Inc. I want to apologize to you personally for this grave error. This situation should not have happened – especially to a game as wonderful as Ys VIII and by a company that strives to deliver the very best customer experience in each title.”

They promise to have a new translator and editor cover the entire game to weed out the unfortunate bits and rebuild them for stronger dialog and characterization, including newly-recorded voiceover to go with the new text. This will be a free update for console players, and will be a native part of the PC version when it launches later in the year.

The original Ys VIII localization will go down in history as one of the worst translations, but it's still fun to look back pic.twitter.com/ashhPLAYnc

In some cases, the original Japanese version offered English-language names of places and enemies, like the Crevice of the Archeozoic Era. That’s slightly awkward to a native ear, so it’s a natural thing to change – maybe to “Archeozoic Abyss” or something of that nature. Nah, the official translation went with “Archeozoic Big Hole.” That’s one of the most prominent examples, but the screenshots being circulated are rife with weird phrases, typographical errors, and general awkwardness.

This is the first Nihon Falcom game for which NIS has handled localization entirely on their own, with previous titles having been released in North America be Xseed – which, it should be noted, never had these sorts of problems. It seems the Western release of Ys VIII has been a problem all around, with the PC version getting indefinitely delayed just a day before the planned release due to quality concerns.

After the announcement about the new translation, NIS followed up with details on the PC release. It’s scheduled for release in mid-December, and NIS are calling on PC port-fixer extraordinaire Durante to help optimize the game. Durante is best known as the creator of a big fix for the Dark Souls port, but he’s worked to optimize tons of Japanese games in the past. In fact he worked with Xseed directly on the PC version of Falcom’s Trails of Cold Steel, which was an outstanding port, boding well for the upcoming release of Ys VIII.