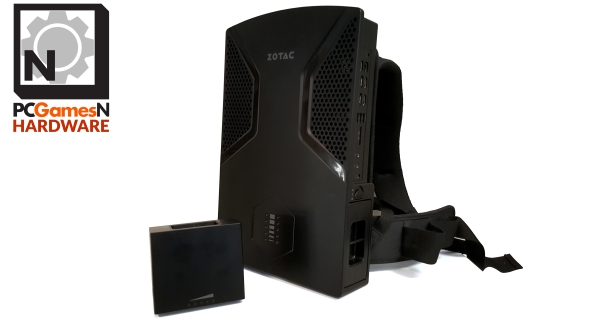 Free yourself from the restrictive tethers of modern virtual reality. That’s the tantalising promise of Zotac’s VR GO backpack: total freedom for room-scale VR in a way that’s not been possible before. Who needs a wireless headset now? Me. I need wireless VR. Because however much I enjoy looking like Egon Spengler this is definitely not the way forward for virtual reality freedom.

What is freedom without control? Check out our guide to the best PC controllers available right now.

The VR GO is essentially a $2,000 (£1,415) gaming PC fitted with a pair of 95Wh batteries and a harness so you can be saddled up like a prize donkey. That might sound a lot like a strap-on laptop without a screen and keyboard to the layman, but it’s promises more than that. Well… it’s certainly heavier.

Click on the quick links to get to your section of choice. 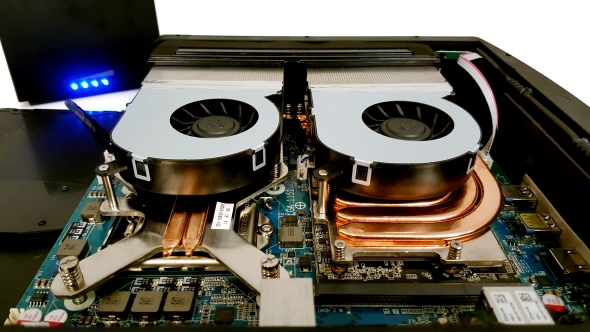 As I said, it’s a human-attached gaming rig which means the VR GO has got a host of serious components inside ready to do your VR bidding, though it hasn’t necessarily had to compromise for its mobile ambitions. The two key specs for pretty much any gaming machine are the CPU and GPU combination and in that regard Zotac are definitely hitting the right notes for VR performance.

The Skylake generation Core i7 6700T is a low-power variant of the top quad core / eight thread processor of Intel’s 6th Gen lineup. That means Intel have dialed back the chip’s base and turbo clockspeeds from the 6700K’s 4GHz/4.2GHz configuration down to 2.8GHz/3.6GHz, leading to a TDP of just 35W. Compared with the 91W TDP of the top Skylake CPU that’s an important power saving part for a battery-operated PC.

Thanks to the efficiency of the Maxwell GPU architecture Zotac haven’t had to go for a low-spec mobile graphics card because the Nvidia GTX 1070 for laptops is essentially the same power-sipping GPU that goes into its desktop brethren. Where the 6700T is a standard LGA 1151 desktop processor, the GTX 1070 inside the VR GO lives on an MXM board as opposed to a standard PCIe-based desktop card.

That does mean, theoretically, both could be upgraded down the line. In real terms, however, you’ll drastically diminish the battery life switching up to a K-series Kaby Lake, for example, and despite the promise of MXM modules making upgradeable laptop graphics possible it’s always been nightmarishly difficult to track compatible MXM upgrades down.

You also get 16GB of DDR4, arrayed across a pair of 8GB SODIMMs, which is accessible from a hatch in the rear of the device. From here you can also upgrade your M.2 storage or add in a 2.5-inch drive to expand your machine’s capacity. You start out with a 240GB M.2 SSD installed as standard, so your first upgrade is always going to be more storage. 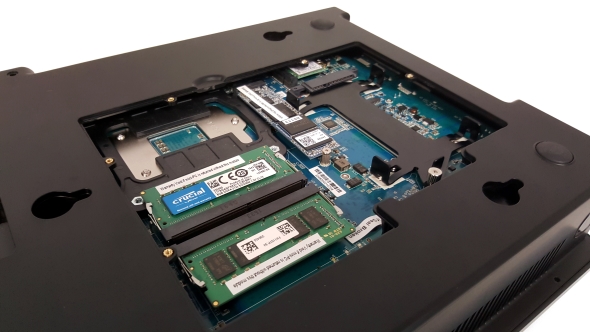 Elsewhere it’s the expected 802.11ac WiFi connection and Bluetooth 4.2 for that vaunted wireless freedom, along with dual gigabit LAN if you just need to get a game downloaded quickly. You also get a host of I/O connections too, with six USB 3.0 ports (two on top and four on the right-hand side), three HDMI 2.0 and two DisplayPort ports as well.

The two 95Wh / 6600mAh lithium-ion batteries are hot-swappable, so you can run with one in the pack and another charging at all times to keep the VR fun going ad infinitum. Should you so wish. 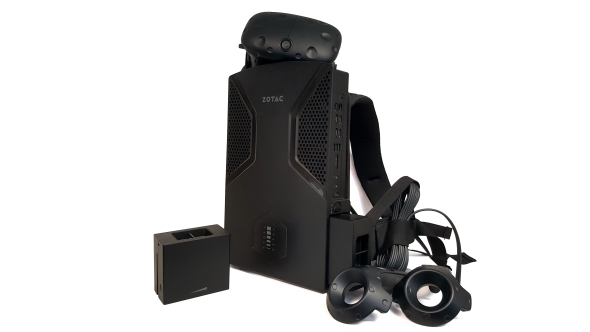 You’ll have noticed we haven’t gone to town on benchmarking the VR GO and that’s because frame rate numbers are arguably less important for such a device than the actual experience of using it. Suffice to say that in all our testing of various VR titles it was never the performance of the GTX 1070 / Core i7 6700T that let us down.

The gaming prowess of the hardware is well known by now and, despite the lower CPU clockspeed, the low-wattage chip never holds back the powerful Nvidia card’s VR gaming performance. At the resolution of the HTC Vive’s headset the GTX 1070 is a very capable graphics processor.

So yeah, gaming performance is a pleasing tick in the positives column for the VR GO. Sitting underneath it is the battery performance. A single one of its power bricks is good for around 45mins of gaming so you can either go for a full one and a half hours of gaming, with both stuffed into your backpack, or use them in hot-swappable fashion, switching them in and out as needed.

But sadly those two ticks end up feeling rather lonesome.

There are lots of little niggles to actually using the VR GO to game on, and they all add up to an experience that would make me pretty upset that I’d spent $2,000 (£1,415) on it.

For a start there’s the initial setup. Because you only get a single power adapter in the box, to share between the VR GO and the battery charger, you have the option to either charge up your batteries so you can eventually get your new machine up and running or power the PC to set it up with your headset and download whatever games you might want to play. It’s been designed so you can’t charge the batteries from the plug socket while they’re in the VR GO so there is no third option. 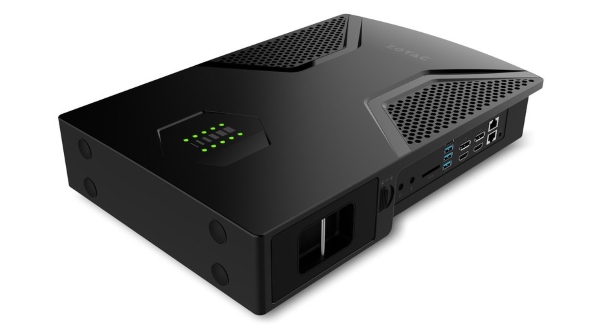 That’s just the early setup frustration, but then there’s the fact that every time you start up you need to have it plumbed into a monitor and keyboard/mouse before you can get into your VR gaming mode. There are somewhat clunky workarounds you can do to ensure SteamVR boots at startup, but it’s far from a perfect solution. And there will inevitably be situations where your VR headset gets marooned on a bug-infested island and you have to go back to your monitor and keyboard/mouse to get things running again.

You know sometimes when you quit Steam games you get a little error message pop up which you’ll just click away with ne’er a thought? Well, in VR you don’t get to see that, so you just end up floating adrift in VR mode unaware your PC needs a little input lovin’ you can’t give it with your headset on.

Trying to plug your pretend unlicensed proton accelerator into a screen and input while you’re juggling a headset and some VR nunchucks is no mean feat. It’s also not much fun. And, while having the machine mounted to your back nominally means you’re VR-ing wirelessly, you’re still aware of the braid of audio and VR cabling trailing out of the headset and into the backpack. You can secure the excess wiring with the backpack’s straps, but there remains a noticeable weight and tug to them. 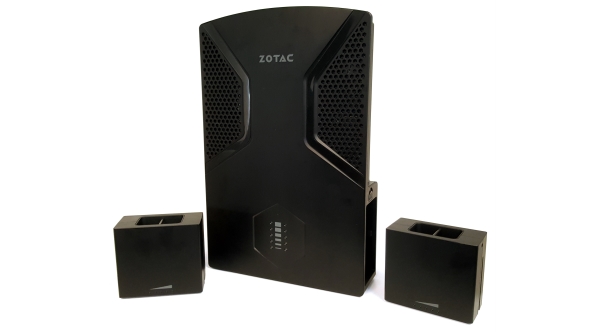 I’m very firmly of the opinion that, at least until wireless technology has been absolutely nailed for modern virtual reality headsets, your best bet for ease of VR use is a powerful gaming laptop. I found the positives to having a VR PC strapped to my back were far outweighed by the niggly experience of actually trying to game long-term on the VR GO. I’d happily return to the more lightweight worries of tripping over that long cable rather than having to repeatedly plug into a screen and keyboard to boot or bug fix.

A laptop always has both screen and controls permanently accessible; if anything goes wrong you just need to lift the headset up and click a few buttons before returning to your immersion VR world. It’s also a lot more portable than lugging a monitor and secondary inputs into wherever you’ve picked as your VR space.

The VR GO maybe has some legs if your home virtual reality space is like some epic Greco-Roman amphitheatre. Mechanically and technologically the machine is sound, once it’s all set up, and if you’re roaming around a vast room-scale arena having that freedom will be a boon. Realistically it probably makes more sense in a commercial, VR arcade environment, not in the home. But that’s like some Russian doll of a niche usage case within an ultra niche user base.

Then there’s the price of it. That $2,000 (£1,415) price tag is sans headset and you’re absolutely going to have to upgrade the paltry 240GB of storage as quickly as you can. And, like I keep banging on about, you will also need to have a monitor and keyboard ready and waiting too. We’re then talking around the $3K mark to get it going… for a platform which is still desperately struggling to find its killer gaming app.

I’ve still yet to find a VR title that would have consistently reaching to strap my headset on instead of relaxing in front of my monitor with a 100-hour, triple-A title. CCP’s energetic Sparc might be the catalyst for me when that arrives, but I’m still not 100% about the eventual longevity of their 1-on-1 Tron-y VR sport.

You can always use Zotac’s VR GO as a traditional desktop machine in between VR sessions, but with its essentially closed upgrade path a quality gaming laptop is still going to be a far more versatile option. For all the VR GO’s marketing material of folk doing backflips VR freedom sadly isn’t really tether-free.