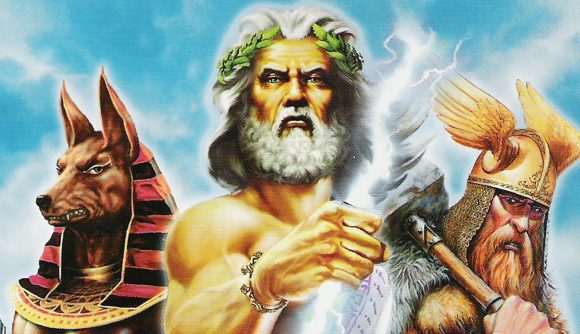 Age of Empires is getting plenty of love these days, as we stand on the precipice of the Age of Empires 2 Definitive Edition and look forward to the eventual Age of Empires 4 release date. But there’s still the matter of the series’ god-focused spin-off: what does this all mean for Age of Mythology? We’ll probably be waiting a good, long time to find out, but Microsoft hasn’t given up on the AOM.

“After we get through the Definitive Editions for the three here, and 4 is kind of rolling,” AOE creative director Adam Isgreen tells Eurogamer, “then we’re going to look back and see what we can do with Myth. Because I love Myth, we’re not going to leave it behind, we’ll figure out what to do with it then.”

Isgreen was responding to a question about a Definitive Edition for AOM, so don’t necessarily take that as an indication that proper Age of Mythology 2 is coming. Nonetheless, Microsoft quietly announced the launch of a new Age of Empires studio back at E3, so the publisher is clearly committed to a big future for the series.

In the meantime, we will get a patch for AOM: Extended Edition – the 2014 HD remaster that isn’t quite as substantial as the new Definitive Edition series – “really soon.” Isgreen says “there are some exploits and some things out there that we know players would love us to get rid of, so we’re going to be doing that.”

For now, you’ll have to make do with the Definitive Edition of the first Age of Empires, if you need a more modernised take on classic RTS action. AOE:DE is coming to Steam as part of Microsoft’s plan to extend support between platforms, so you’ll have a new avenue to pick it up soon.