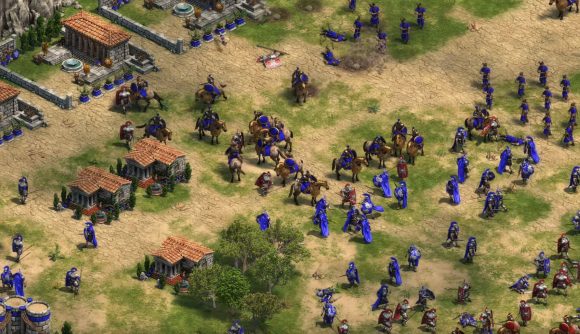 We’ve had some exciting Age of Empires news this past week. Microsoft announced that the XBOX Game Pass – including the Age of Empires I, II, and III: Definitive Editions – is coming to PC soon, and the Empires devs revealed that the three games are also heading to Steam. Now, the series’ official Twitter account has confirmed that Age of Empires: Definitive Edition will support cross-play between the two platforms. You’ll never be walled-in again – choice-wise, at least.

Responding to a user’s question about whether they’d need to buy duplicate copies of Empires I on Steam and the Microsoft Store, the game’s Twitter account confirmed that wouldn’t be the case. The tweet said “AoE: DE will support cross-play between both platforms, so you’ll be able to play with everyone no matter what! Owning the game on one store won’t give you a license on the other, but you can add non-Steam titles to your Steam library if that’s where you like to manage your games”.

This will be pretty exciting for players looking to expand their horizons and take on aspirational conquerors across platforms. You might find some foes you’ve never encountered pre-cross-play and discover new opportunities to really hone your strategic skirmishing skills.

This follows increasing moves towards supporting cross-play by big titles. Last week Call of Duty: Modern Warfare developer Infinity Ward announced that they are looking into incorporating cross-PC-console play into the upcoming title to “unite the community”.

AoE: DE will support crossplay between both platforms, so you'll be able to play with everyone no matter what! Owning the game on one store won't give you a license on the other, but you can add non-Steam titles to your Steam library if that's where you like to manage your games.

In the last few years, games like Rocket League, Fortnite, and Sea of Thieves have started enabling cross-play, and it looks like it might be becoming more of a consideration for studios and platforms alike. Particularly as Google Stadia is looming on the horizon, which could start opening up opportunities for cross-device streaming and playability.

If you’re keen to jump into some cross-platform conquering right away, you can grab Age of Empires: Definitive Edition on the Microsoft Store today for $19.99 (£14.99). Or you can wait to soak up its shiny new 4k visuals, more than 40 hours of modernised gameplay, and eight person multiplayer battling when it’s released on Steam – which we should hear more about soon. Now it’s your choice!