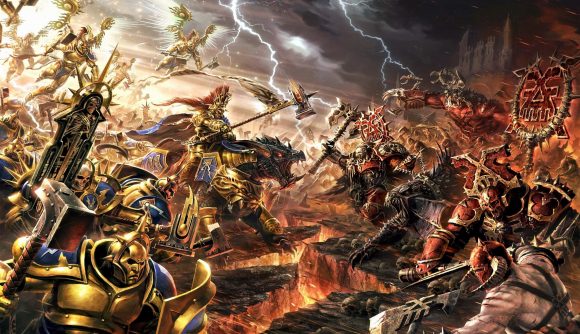 The Old World has been destroyed, but you’d hardly know that from videogames. There haven’t been many attempts to make PC games based on Games Workshop’s new Warhammer setting, Age of Sigmar, even though it’s now been the law of the tabletop land for going on five years. But that’s about to change, since Frontier Developments has revealed that it’s working on an Age of Sigmar RTS.

Eurogamer spotted a note left deep within the bowels of Frontier’s website, specifically under Investor Relations, that says the company has secured the license to create am Age of Sigmar real-time strategy game.

“Warhammer Age of Sigmar is Games Workshop’s most recent iteration of the globally renowned fantasy setting in which the four Grand Alliances of Order, Chaos, Death, and Destruction vie for control of the Mortal Realms,” the announcement reads. “Unique and distinct in style, and endless in scope, this ever growing universe sits alongside the far future dystopia of Warhammer 40,000 as the most successful tabletop miniatures games in the world.”

To put it slightly differently: Age of Sigmar is about big brass boys beating up demons in weird dimensions.

In addition to literally blowing up the world of Warhammer Fantasy Battles, Age of Sigmar introduced a streamlined ruleset to the game that encourages a more narrative-focused approach to the game and allows for a lot of advanced mechanics to be introduced on a per-unit basis via Warscrolls. It’s set across eight interdimensional ‘realms,’ each with its own ruleset, theme, and local gods.

How that might play out in an RTS is anyone’s guess, but so is Frontier’s approach to the genre, as it’ll be the company’s first-ever attempt at building a real-time strategy game. Frontier has made a massive space trucking sim in Elite Dangerous and several theme park tycoon games like Planet Coaster and Jurassic World Evolution, but no RTS games before now.