November 11 was Skyrim’s tenth birthday, and the day was marked by the release of a new (yep, another one) anniversary edition of Bethesda’s massively popular RPG. It was strange, however, to suddenly remember that it had also been ten years since the launch of what is arguably a more influential game, FromSoftware’s Dark Souls. Skyrim certainly sparked an interest in role-playing games in an entire generation of players, but Dark Souls – which came out on September 22 the same year – has created its own genre.

Be that as it may, Dark Souls’ tenth anniversary wasn’t observed in the way Skyrim’s was. One reason for that, as dep ed Jordan suggested to me, is that there have been several Souls games since the original came out, whereas any notion of an Elder Scrolls 6 release date is a distant glimmer on the horizon. Another reason is that everyone who would be celebrating Dark Souls’ tenth birthday is busy getting excited about the upcoming release of Elden Ring.

I’m excited about Elden Ring, too – but I have a confession to make first. I’ve never finished a Souls game. I’ve dipped my toe into several Soulsborne titles, and quite a few Soulslike games, but I’ve yet to play the original (or any of its sequels) through to the end. It’s something I want to correct before Elden Ring comes out, and I figured the way to finally get it done was to give myself an assignment with a deadline. Welcome, dear reader, to my Dark Souls journal.

This won’t be a simple account of another Dark Souls playthrough – odds are, you’ve played it yourself already, or maybe you’ve watched one of the many Let’s Plays posted to YouTube. Instead, my goal is to play through the game with the benefit of hindsight, seeking out and highlighting the elements that have so firmly lodged Dark Souls into our collective gaming consciousness. 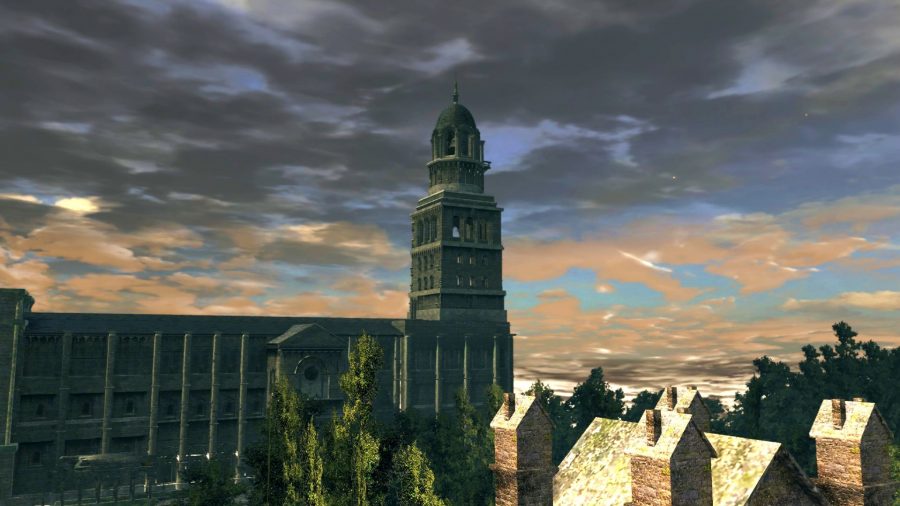 What’s perhaps most distinctive about the opening areas of Dark Souls is their verticality. It’s technically an open-world RPG, but it feels unlike any other game in the genre. There are no sprawling fields, only the occasional courtyard, and every new goal is either high above or far below you.

My first few hours in Dark Souls are spent making my escape from Northern Undead Asylum, travelling to the peaceful haven of Firelink Shrine, and ascending through Undead Burg to the steeple on the church in Undead Parish, where I’ll ring the first Bell of Awakening.

This is familiar territory. While I’ve never finished a Souls game, I’ve played through Undead Burg and its surrounding zones several times, and I know my way around pretty well. More importantly, I know what’s coming: an undead warrior bursting out from behind a bookcase fails to spook me, and I know where to watch out for deadlier balder knights further ahead. 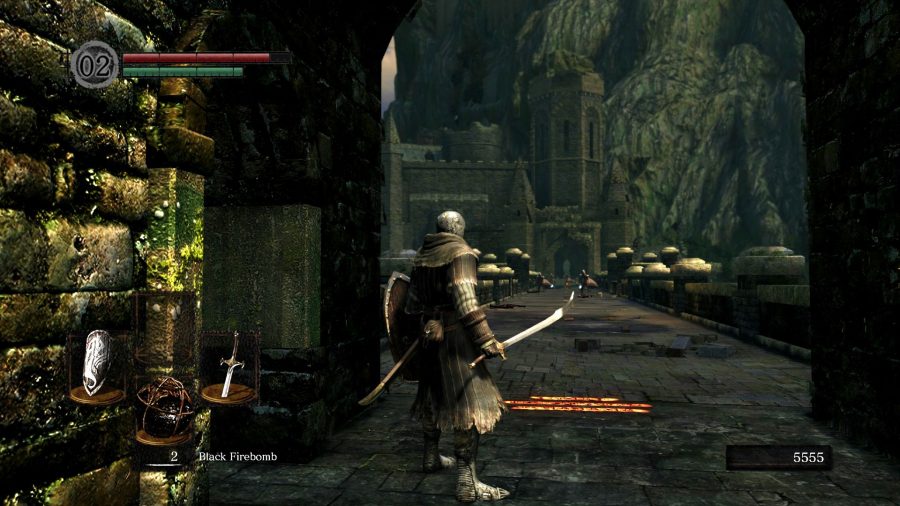 It’s here where Dark Souls really wears its Castlevania influence on its sleeve. Undead Burg and Undead Parish frequently funnel me through narrow hallways or across catwalks, and it’s easy to squint and see these areas in particular flattened out into the levels of a 2D platformer.

every new goal is either high above or far below you

That’s why the Taurus Demon fight feels so strange: it’s happening in a 3D space, but the rules are the same as if it took place in Spelunky or a Metroid game. The demon approaches you on a high curtain wall, and there’s no room to manoeuvre around it. Just as in the 2D platformer games of yore, you can move towards or away from the demon, or roll through some of its attacks if your timing is good. There’s another way to win the fight, and once again verticality plays a part – a ladder to the right of the arena entrance takes me up a tower where I can leap off the edge and land a falling attack on the Taurus Demon, which deals a ton of damage.

Shortly after this minor boss fight, I find a ladder to kick down, forming a shortcut between Undead Burg and the bridge guarded by the drake. This makes the mental map in my head click pleasingly into place, and it’s a feeling I remember getting from Super Metroid’s interconnected passageways many years before. 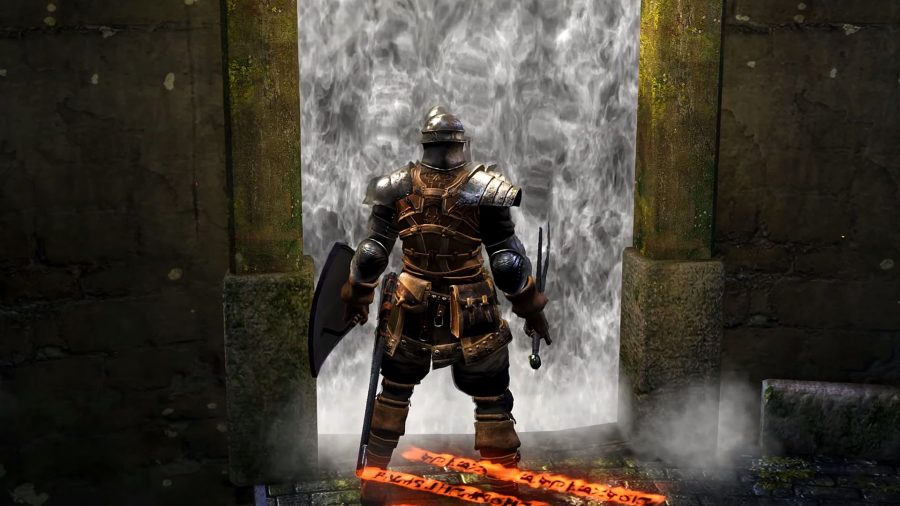 The star of the area, however, is the verticality of the level design. At Firelink Shrine, the Crestfallen Warrior tells you of the two bells: one high up in Undead Parish, and the other far below at the bottom of Blighttown’s stinking swamp, set in the very foundations of Lordran’s impossibly high walls.

Leaving Firelink Shrine, you’re attacked by a small group of skeletal warriors. One, high above, along the precarious cliff path, tosses firebombs down at you as you engage the rest of the mob. It’s a reminder to look up for threats – they won’t all approach you on your level.

That’s a lesson repeated just up the path a bit in town. After dealing with some more firebomb-hurling enemies on a rooftop, you’ll pass an opening into a tower and spot some enemies down a short flight of stairs. At this point, you’ll likely be feeling more than ready to take them on – but if you charge into combat, you’ll be shot in the back by a crossbow-wielding skeleton perched at the top of another tower you just neglected to explore. They’re not visible without heading up the spiral staircase inside, so the lesson is enhanced: you won’t be able to spot every threat simply by looking. 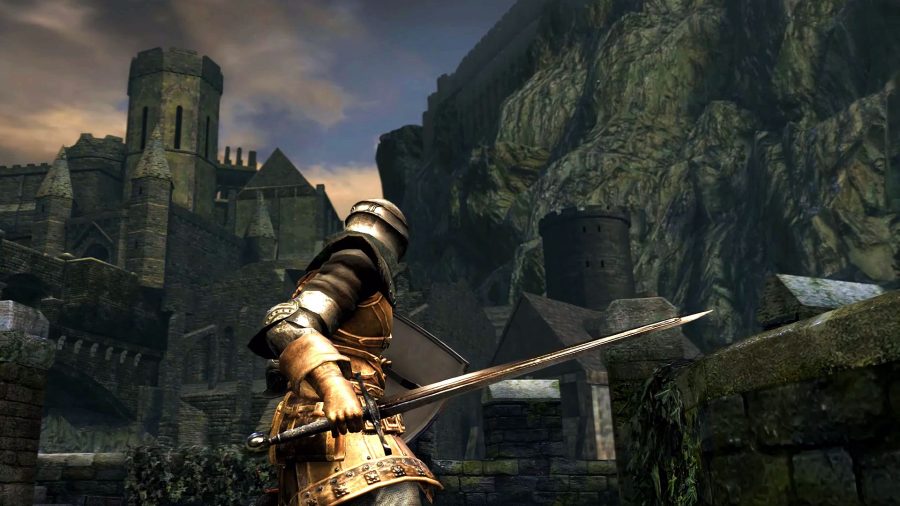 The trip from Firelink Shrine to the Bell Gargoyles atop Undead Parish is one of my favourite sequences in action games, and it’s one Soulslike games have struggled to match for ten years.

the Taurus Demon fight happens in a 3D space, but the rules are the same as if it took place in a Metroid game

The area is built along the outer wall of a massive fortress, with a bridge and aqueduct that span the chasm on the outside. The curve of the wall bends all the architecture, making it difficult to orient yourself, and it results in these delightful moments of discovery where you’ll look down and realise you’re staring at the winding path you took on your way up.

There’s a real sense of accomplishment in those vistas – it’s comparable to the feeling of reaching a peak after a long hike and seeing familiar landmarks from a new and strange perspective. It also makes Undead Burg feel like a real place, a hazardous hilltop hamlet with a story and sense of history, rather than another level to pass through and forget. 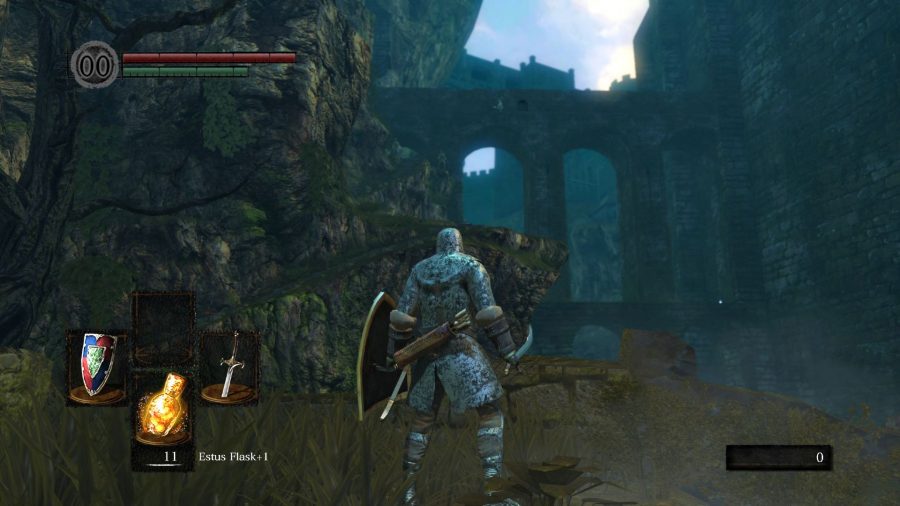 But the relief and accomplishment I find from ringing the first Bell of Awakening have nothing on what’s to come. After the sunny heights of the belltower, my next journey is another vertical one: descending through the dank basements and sewers of the Depths, down to the very foundations of the world.