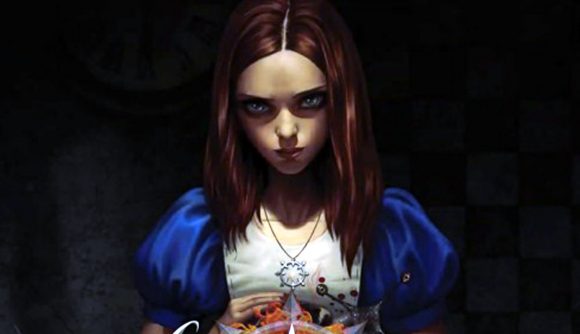 It’s been a long time since anything substantial was heard about Alice: Asylum, otherwise known as American McGee’s Alice 3 – the dark fantasy action-platformer take on Alice In Wonderland. Now creator American McGee has released a full ‘narrative outline’ for the game, so fans can experience Asylum’s entire story – which is great, because the game is a long way off.

The two Alice games were released by EA in 2000 and 2011 – the tenth anniversary of Alice: Madness Returns was last June – and were well-regarded by fans, despite being relatively straightforward action-platformers. The dark and unique take on the Alice stories were a big part of the appeal, for sure.

American McGee has been working on a third game – Alice: Asylum – since around 2017, and has been steadily releasing pieces of artwork and info on the Alice Patreon since then. This weekend McGee put out possibly the biggest update yet – a full narrative outline of Alice: Asylum, complete with script extracts, artwork, and the game’s entire story from start to finish.

There are obviously heavy spoilers for Alice 3 – the outline goes into a lot of detail – but McGee adds that it’s “still very much a work-in-progress” and is looking for fan feedback to improve it. However, even if Alice: Asylum does happen it’s still many years away – this outline will form the basis of the design bible that will be used in pitching the project to “prospective investors”, so the project’s not even been greenlit yet, unfortunately.

The "Alice: Asylum" Narrative Outline PDF is now publically accessible over on my Patreon. https://t.co/mrtS0uvCll

You can join in the Crowd Design process even if you aren't a Patron (though you should feel cheap and dirty if you do, I mean it's like $1 a month, come on man). pic.twitter.com/7foWxIgmc0

Please be aware when downloading the Alice 3 outline – as it makes clear on the first page – that the story contains a lot of distressing scenes involving the likes of mental health, death, and child abuse, so read the content warning carefully before proceeding.

American McGee is still probably best known as one of the lead level designers of id Software’s original Quake, which coincidentally just got a remastered re-release this week.