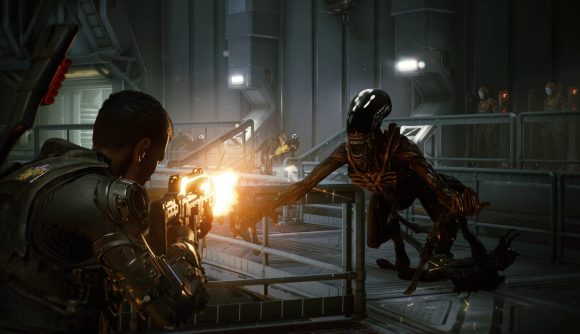 Aliens: Fireteam Elite hits digital shelves tomorrow, and critics have been playing the sci-fi co-op game long enough to deliver their verdicts. It’s the debut for developer Cold Iron Studios, and it seems as though the team has delivered a pretty solid Aliens horde experience without colouring outside the lines.

In Aliens: Fireteam Elite, you and some pals will take on the roles of custom colonial marines sent on yet another ‘bug hunt,’ only this time you’ll hopefully be surviving the encounter. You’ll be facing down the evolving threat of the aliens, but also Weyland-Yutani synthetic androids, as you battle through four campaigns, each with its own storyline.

YouTuber SkillUp recommends Aliens: Fireteam Elite, noting that it has some technical foibles on all but the best graphics cards, while still delivering a solid Aliens-themed experience with weapons that feel authentic and are fun to fire. Eurogamer’s unscored review dings it for some repetitive level design, but praises the aggression shown by the alien AI, which prevents you from ever feeling too safe. Angry Centaur Gaming recommends waiting for a sale to play this one.

Here’s a selection of Aliens: Fireteam Elite reviews and scores:

Aliens: Fireteam Elite is available for pre-order now on Steam. It launches tomorrow, August 24. It’s currently sitting at an aggregate score of 68 on Metacritic and at 71 on OpenCritic.