Fudzilla is claiming that AMD has switched manufacturing gears for its latest Navi graphics card, moving from TSMC to Samsung for the RX 5500 XT. The suggestion is that the 7nm Navi 14 GPU has been created at Samsung’s fabs in order to lighten AMD’s utter reliance on TSMC having enough manufacturing capacity to fulfil all of the red team’s needs, as well as Qualcomm, Apple, Nvidia, and a host of other important contract manufacturing clients.

And we know how dangerous getting chip supply wrong can be for a company. Just look at where Intel is right now with its own 14nm struggles and the recent suggestion that it is going to start looking to enlist more third-party manufacturing aid to help get it out of its current supply constraints.

AMD struck a deal with Samsung earlier this year for the Korean tech giant to start using the RDNA GPU architecture in its future smartphones. “This strategic partnership will extend the reach of our high-performance Radeon graphics into the mobile market,” Dr. Lisa Su said at the time, “significantly expanding the Radeon user base and development ecosystem.”

The Fudzilla rumour stems from its own sources, so at the moment the evidence for the claim is all rather circumstantial. The report admits that after communication with its sources the site still does not know whether that means Samsung will be manufacturing all Navi 14 GPUs, or just enough to lighten the demands on TSMC.

There are a couple of different versions of the Navi 14 GPU going around, with a full-fat, 24 CU, 1,536 core version being restricted for use in Apple products as well as the one in the RX 5500/XT discrete cards, and RX 5500M mobile chips. AMD has told us that the mobile and discrete GPUs are identical, which means there are effectively only two actual SKUs. 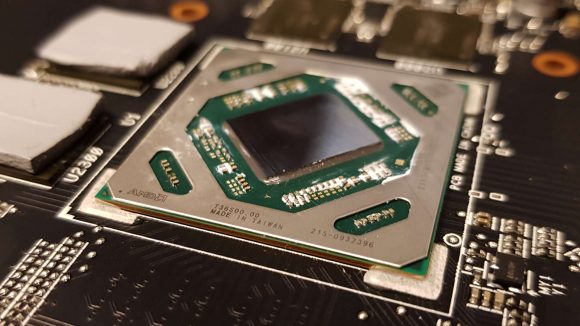 So, where are the Navi 14 GPUs manufactured? Who knows. We’ve opened up the Sapphire RX 5500 XT 4GB and the Asus RX 5500 XT 8GB cards we’ve got in the office and the 4GB card’s GPU says it’s been manufactured in China while the 8GB one bears a ‘Made in Taiwan’ stamp.

That could potentially mean one has come out of TSMC’s Taiwan fabs while the other from one of Samsung’s Xi’an or Suzhou facilities.

We don’t have enough of the different GPUs to be able to perform a definitive test of the different chips and tell if there’s any performance difference between the two, but anecdotally the China-made chip seems to deliver higher clock speeds at least.

But with potentially two locations manufacturing Navi 14 chips it will be interesting to see if the silicon lottery comes into play and PC gamers end up hunting down GPUs built from one place rather than the other… Though if the China-made one comes out on top, those chips are unlikely to find their way into the US with Trump’s Trade War ongoing.