Professional overclocker and serial delidder, De8auer, has taken his chip-cracking skills to the new AMD Ryzen 2 processors… and found there’s not really any point to risking the mechanical death of your shiny new CPU.

Want to know the basics of overclocking without the possibility of siliconicide? Check out our easy guide on how to overclock.

The fact that delidding your Pinnacle Ridge processor doesn’t deliver anything in the way of tangible benefits isn’t anything to do with any perceived failing on the part of AMD’s new CPUs, in fact it’s just the opposite.

Because AMD have committed to using a conductive Indium solder to physically connect the heatspreader to the silicon itself, the Pinnacle Ridge CPUs’ heatspreaders are already pretty damned effective. With the AMD Raven Ridge APUs they went for a more economical (read: cheaper) thermal interface material underneath the plate, but for the second-gen Ryzen chips they returned to the same Indium solder they used for the first-gen CPUs. 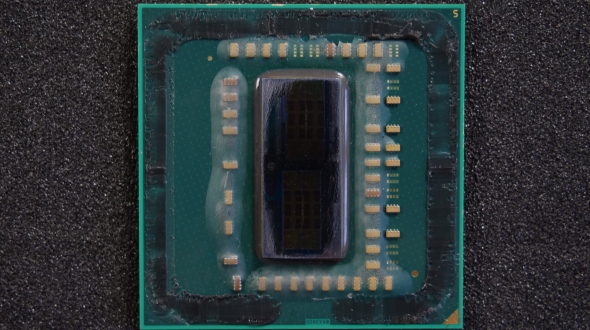 And that’s why, when Deeightauer delidded his Ryzen 5 2600, he found that the whole delidding and cleaning process, coupled with a slightly different replacement thermal interface material, only let the chip run around 4°C cooler. Our Ryzen 5 2600X will run a little hotter than the non ‘X’ version, but it’s still unlikely to really benefit from the delidding process.

With a modern Intel chip, however, it can make a massive difference – hence why it’s becoming more popular. Replacing the chewing gum Intel use to attach their heatspreader to the CPU with decent liquid metal can cut maximum CPU temperatures by anything up to 30°C. Some have reported even more.

But the risk you run attempting to delid your CPU, especially if you’re not a serious professional, such as De8auer, is definitely not worth it for the marginal cooling performance returns you’re likely to get with an AMD Ryzen chip. Because AMD haven’t stinted on the goo they’ve used.

Though, to be fair, the guy does make it look easy. All he had to do was heat his Ryzen chip up to around 180°C to melt the Indium solder and shuck the heatspreader off with his own little tool. Simple. Probably.