It’s nearly AMD’s semicentennial and the company is putting together a batch of commemorative products to mark the occasion. AMD has now confirmed a Ryzen 7 2700X Gold Edition CPU bundle, as well as offering World War Z and The Division 2 gratis to anyone buying select AMD CPU, GPUs, or PCs. Further special edition products have also been announced, voluntarily or involuntarily, including a brand new AMD Radeon VII colourway and X470 motherboards.

Advanced Micro Devices was founded on May 1, 1969 by Jerry Sanders and his compadres from Fairchild Semiconductor, now a subsidiary of ON Semiconductor. That’s the same IC company that Gordon Moore and Robert Noyce worked at before founding Intel back in the day. Following the development of its own microprocessors, logic chips, RAM, and after multiple cross-licensing agreements with Intel, it’s been slowly rising up to become the only major, multifaceted contender to the x86 originator in the CPU market.

And it’s now celebrating 50 years at a time when its CPU division is metaphorically killing it. And that means some special products that may tickle gamers’ fancy.

The main event is the Ryzen 7 2700X Gold Edition, which was leaked by a retailer a little early. Aside from the gold accented box, you’re also getting those free games, a sticker, and a commemorative T-Shirt… while stocks last anyways.

Red rig: These are the best graphics cards

However, if it’s anything like Intel’s celebratory Core i7 8086K, we could see AMD bin the best performing silicon for a slight bump in clockspeed. That extra out-of-the-box performance is looking more and more unlikely right now, and is still a hard sell with AMD Ryzen 3000 around the corner. 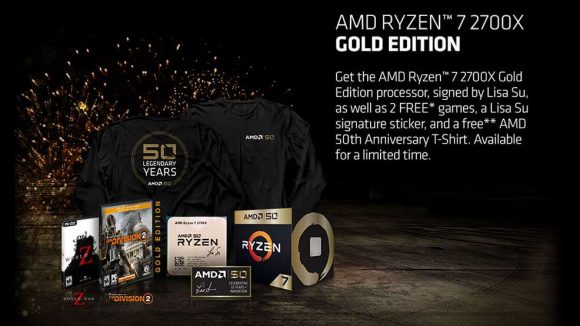 But recent noises (emanating via VideoCardz) indicated AMD’s Radeon VII will be joining the festivities with a special 50th Anniversary Edition. The card was launched earlier this year, marking the first 7nm GPU on the market, and was available strictly in reference silver fare. However, the latest leak suggests that AMD could be prepping a rather gaudy bright red card to mark the occasion. 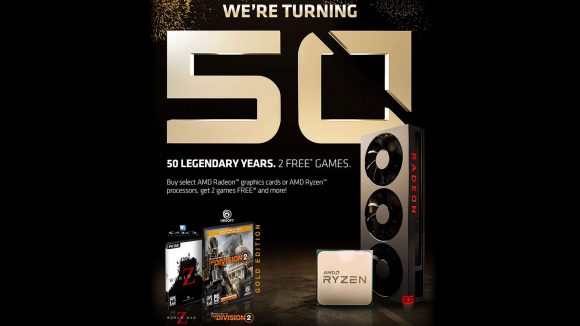 The promo materials being shunted out to retailers to promote the 50th anniversary deals, however, have no mention of an updated, recoloured 7nm GPU, but AMD has now officially announced the Radeon VII Gold Edition too. With a red shroud. Yes, the Gold Edition is red. Obvs.

AMD partner, Sapphire, has at least announced it’s going with gold when putting together a shimmering, golden AMD RX 590 Nitro+ with white LED fans for the big event.

And finally, Gigabyte has announced it will be launching a limited run of X470 Aorus Gaming 7 WiFi-50 motherboards. These are almost identical to their non-50 designated boards aside from added RGB lighting, and will be available alongside the Aorus RGB M.2 NVMe SSD on April 26.

The two free games are available on a host of AMD components and PCs, and here’s the list of parts elligible for the offer. Of all those the budget hero card of today, the RX 570 is looking like even more of a bargain now for its $150 (£130) price tag now you can get The Division 2 and year 1 pass and World War Z for free too.

Further anniversary products are sure to be announced in the next few days, with AMD’s 50th anniversary falling on May 1, 2019. Stay tuned.