The great and the good of AMD were out in force last night at their Financial Analyst Day where they took the wraps off the first AMD Vega card set to launch in June, the Titanesque Radeon Vega Frontier Edition.

Read more: the best gaming monitors to make the most of your new GPU.

The important thing to note is that the Vega Frontier Edition isn’t denoted as an ‘RX’ card, which indicates where AMD is targeting the inaugural Vega GPU. This isn’t a consumer-focused card, according to AMD this is Vega for the ‘data scientist, immersion engineer and product designers.’ This is a professional-level graphics card not really meant to find its way into the hands of us gamers.

And yet AMD have still ensured they give the Vega FE a shiny, premium shroud, with what looks like both blower and water-cooled editions. “Everything about this card will scream premium,” said AMD’s Raja Koduri. 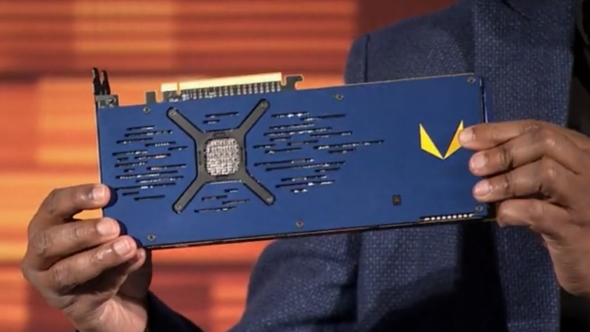 In terms of the specs we’re looking at a Vega GPU with 4,096 GCN cores across 64 next-gen compute units, 16GB of HBM2 memory utilising the high-bandwidth memory cache technology and be capable of delivering around 13TFLOPs of peak compute performance.

It’s also going to demand a fair chunk of power too as there are a pair of 8pin power connectors on the board itself which means you can push up to 375W into the card. It’s a beefy card, so it stands to reason it needs a lot of energy to do what it does.

Basically though it looks like a variant of the previously announced Radeon Instinct MI25 accelerator, except this time around it’s got video outputs.

Sound familiar? This is essentially the same treatment Nvidia have historically given their Titan graphics cards, putting them out at the very top of their GPU stack utilising the high-end specs of their pro-level Quadros. 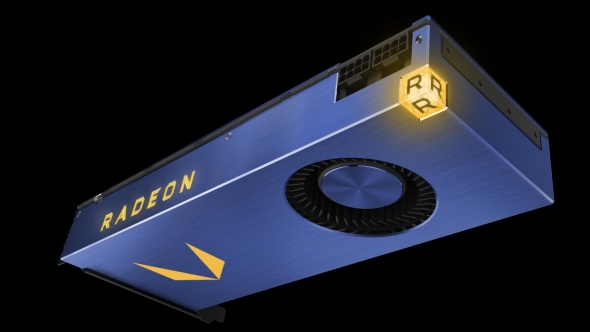 There’s little doubt in my mind that this is being aimed directly at Nvidia’s Titan Xp and it will be fascinating to see how it competes with the green team’s absolute best GPU around.

The Radeon Vega Frontier Edition will sit above the RX Vega cards, which the latest rumours suggesting will be formed of an RX Vega Nova at $599, an RX Vega Eclipse at $499 and the RX Vega Core at $399. If the Radeon Vega FE (even that abbreviation is almost aping Nvidia’s Founders Edition nomenclature) doesn’t retail for at least $999 I’ll be very surprised.

The Radeon Vega Frontier Edition is set to be released in late June, but AMD have remained very coy about what’s going to happen with the rest of the Vega GPU stack. With the Vega FE hitting the Q2 2017 mark by launching before the end of June AMD will still be able to say Vega’s on track even if the consumer cards launch a lot later. Here’s hoping their silence on those genuine gaming cards is no indication of them coming well after the Frontier Edition.