AMD’s next-gen, 7nm+ RDNA 2 architecture will arrive in graphics cards in 2020, and bring hardware accelerated ray tracing to AMD’s GPUs for the first time. And just in time to feature on the PC platform as well as the new AMD Navi-powered Sony PS5 and Xbox Scarlett consoles… or whatever they end up being called.

AMD has just announced all the details for its new 16-core gaming processor, the Ryzen 9 3950X, but has also divulged the design, price, and performance for its new Navi-powered AMD Radeon RX 5700 XT and RX 5700 graphics cards. So now they and their RDNA-based graphics silicon have been shown off in public for the first time, we should start looking ever onto the future, right?

The RDNA graphics architecture is the immediate successor to the Graphics Core Next (GCN) design that’s been powering AMD graphics cards for years. It has reportedly been designed from the ground up, in the same way that Zen was after the Bulldozer architecture was ditched on the CPU side.

It’s a 7nm GPU design, and offers a huge amount of extra performance to the Radeon graphics card range compared with the previous GCN generations. But there’s more to come from the RDNA architecture, and that will occur next year as AMD updates its CPU and GPU ranges to TSMC’s 7nm+ process node, and introduces us to the RDNA 2 architecture.

With RDNA 2 AMD will deliver its first hardware acceleration for real-time ray tracing. Right now all its GCN and RDNA-based GPUS can support ray tracing via the Radeon Rays and ProRender systems, but they’re both tied to using the graphics silicon’s shaders to do it. 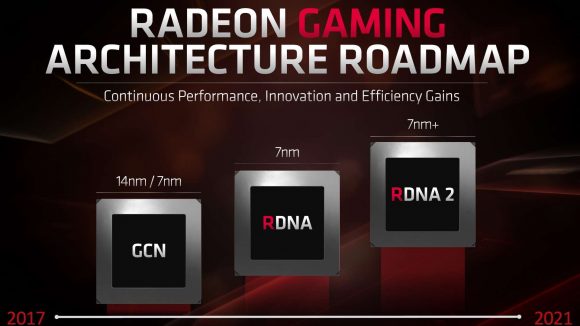 With the introduction of the next generation of the RDNA architecture next year that will shift to dedicated hardware acceleration to support “select lighting effects for real time gaming.”

But it’s not just going to stop there as the plan is to move on from local hardware acceleration for real-time ray traced lighting effects to deliver full scene ray tracing using the power of cloud computing. 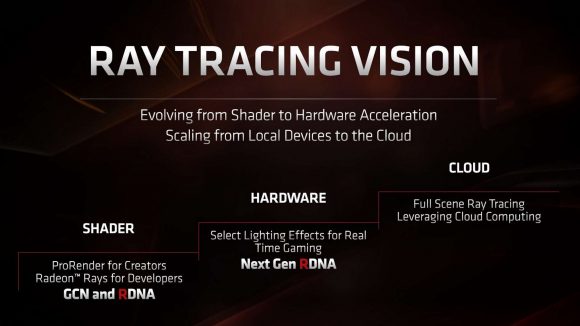 That might sound like a bit of a pipe dream right now, but ray tracing is very much a compute problem. The sort of shared GPU resources that will eventually make Google Stadia more powerful than any desktop PC – think CrossFire on a mega scale, and CrossFire that truly scales – can work together to make full scene ray tracing at home a reality.

So yeah, AMD said it needed to talk about its ray tracing strategy before E3 and it’s just spilled the beans. The beautifully lit beans, with photorealistic ambient occlusion, and some sexy shadow effects…

Now it’s time to get hype for next year’s graphics cards… and the first $449 Navi GPUs haven’t even been released yet.