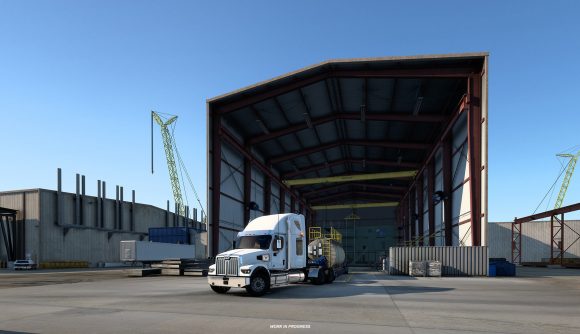 It’s time for more digital trucking tourism, as the devs at SCS Software have provided a fresh look at American Truck Simulator‘s upcoming Texas DLC with a deep dive into the exciting world of offshore shipyards. Texas is massive and to help fill out the expanded scope of this new expansion, the devs are bringing us some new industries.

There are two offshore shipyards highlighted in the new blog post. Corpus Christi specialises in such things as the “the design and deconstruction of offshore oil rigs, working with shipwrecks, and construction of other subsea and offshore structures”. The Brownsville facility is “the foremost offshore shipyard in the Gulf of Mexico, and its experienced workforce is focused more on the oil rigs”.

You can see the Corpus Christi shipyard above, and the Brownsville service below. American Truck Simulator’s Texas DLC was announced back in March, and it still doesn’t have a release date.

The Texas expansion will be as huge as it needs to be to replicate the massive state, but that means it definitely won’t be out this year – something the devs already made clear in that initial announcement. 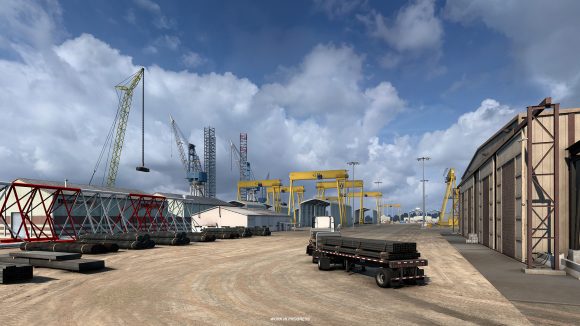 Over on the Euro Truck Simulator 2 side, the devs have been running down some features coming in the free 1.43 patch, like new viewpoints and special transport routes. For more truck games to check out, you can follow that link.