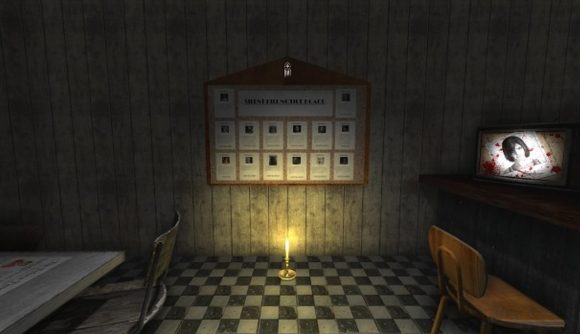 Playing any of the classic Silent Hill games isn’t easy these days. The PC port was a cold 18 years ago, and the last remaster was in 2012. For such a beloved horror game series it’s criminally hard to play now, so a modder has created a refresher using Amnesia to make sure we remember it fondly.

Silent Hill: Respite is a visual novel mod of Amnesia: The Dark Descent that plays as a strange, in-universe memoriam of Silent Hill’s better days. You start in a small diner, on one side is the mark of series antagonists The Order, and on the other is a notice board full of characters that are either dead or alive, each with a short description attached. Four songs from the collective soundtracks by Akira Yamaoka play as you wander around, or stare out into the thick fog outside.

Strewn around the room are Easter eggs and references, a guide to which you can watch below in a developer’s commentary from creator TrollForce. The whole thing is meant as a small celebration of the first four Silent Hill games, and the community that still loves them. “Entries such as Silent Hill, Silent Hill 2, Silent Hill 3, and Silent Hill 4: The Room are collected as memories and to show what the series has meant to the community,” the ModDB description reads. “Team Silent and Silent Hill may be gone, but the memories and the lasting impact on horror will forever be in the hearts and minds of the fans of the revolutionary series.”

Amnesia developer Frictional Games announced the survival games would be open source from now on, allowing modders to create bigger and better projects. As one commenter notes on YouTube, Silent Hill: Respite would make a great VR experience, something open source makes that much easier.

You can find the mod here. The closest we have to a new Silent Hill for now is the DLC for Dead By Daylight. The latest trailer for Amnesia: Rebirth came out a couple of weeks ago, bringing with the release date. As always, mod with caution.