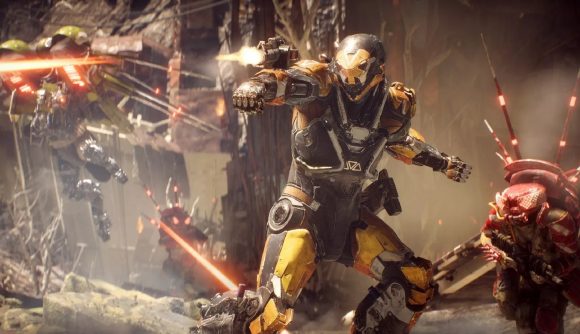 It’s fair to say that Anthem has had a bit of a bumpy ride since its launch in February. There have been issues with its loot systems, crashing problems, and following an announcement that some upcoming features have been delayed indefinitely, its Twitch viewership has started to plummet. Recently, game leads have moved on from developer BioWare, leaving players questioning the studio’s future. However, it looks like the studio’s parent company EA is going to stick with the game – and BioWare itself – for the foreseeable future.

In an interview with GameDaily.biz (via PCGamer) EA’s CEO Andrew Wilson makes it clear that BioWare’s future at the helm of Anthem is safe, though acknowledges issues that both the studio and its loot-shooter have faced. These include attempts at trying to bring players that want very different things from the game together – fans of “traditional BioWare story-driven content” and “action-adventure type content”. He says that “the promise was [they] can play together, and that’s not working very well”.

However, comparing Mass Effect studio BioWare’s pedigree to that of Steven Spielberg’s (whose movies are usually winners, despite the occasional blip), he says “if I think about Anthem on a seven-to-ten-year cycle, it may not have had the start that many of us wanted, including our players”. That said, he feels that “that team is really going to get there with something special and something great, because they’ve demonstrated that they can”.

EA has developed something of a reputation for closing studios, so these comments will likely be welcome to fans of BioWare’s games, and the studio’s devs themselves.

Judging by Wilson’s comments, it sounds like EA is confident that BioWare will continue to evolve with its players, and the future of Anthem is still promising. “The teams at BioWare will continue to come to work every day and listen to their players old and new and seek to deliver on the promises they’ve made to those players. That’s what you’re seeing with Anthem today”.

We don’t know what the future holds for Anthem, but hopefully BioWare will get it to where they want it soon.