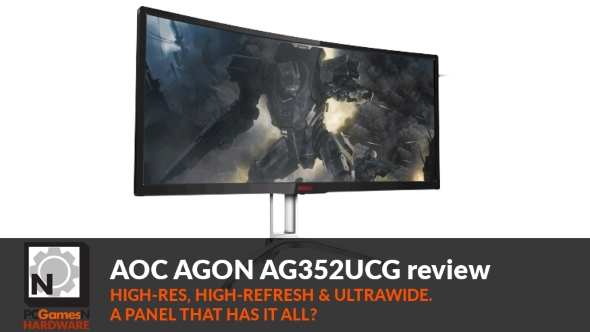 There was a definite feeling of deja vu having this familiar AOC monitor sprawled across my desk. That’s not necessarily a good thing, though, because it was born of the last AGON ultrawide we tested, and just how cross-eyed I got reviewing its hazy display. But while this new screen looks identical on the outside its upgraded spec-sheet makes for a far more palatable panel.

A quality display will likely outlast your current rig, so check out our guide to the best gaming monitors to make sure you get the right one for you.

The AGON AG35QCX used a completely different curvy VA panel to present its image, but while it nailed a 200Hz refresh rate, the hazy motion and limited vertical resolution made it impossible to recommend.

The more expensive $960 (£720) AGON AG35UCG has corrected all those faults, however, to deliver a mighty impressive monitor capable of offering serious levels of gaming immersion.

Click on the jump links below to leap to the category of your choice. 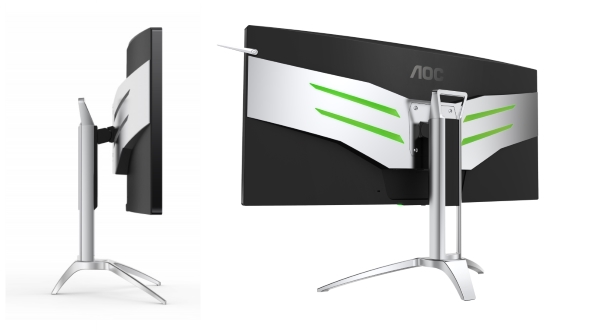 The AU Optronics 8-bit AMVA panel that AOC have used in their latest ultrawide monitor can’t quite match the 200Hz refresh rate heights of the previous panel. But if it can deliver its own 100Hz rate without muddying the screen’s representation of motion then I’m sold. We’ve been spoiled by recent panels hitting upwards of 144Hz even while using VA or IPS-a-like screen tech, but honestly, anything above the traditional 60Hz refresh can still make a big difference.

If you want a quick refresher on panel technology you can check out our guide, but basically it runs thus: TN panels are cheap, and often nasty, but are capable of super-low response rates and very high refresh rates. That makes them good for esports aficionados who care less about image fidelity and more about speed and fluidity. IPS (or AHVA) panels offer the best colour reproduction and overall image quality, but can be slower and more expensive. VA panels are a good compromise offering slicker images with almost the same level of fidelity as IPS.

The other big change, and arguably the one which makes this panel a far more attractive purchase that the previous AGON, is the native resolution. The AG352UCQ sports a max res of 3440 x 1440, which delivers a full 21:9 aspect ratio, and means it’s got a much more usable vertical resolution than the 2560 x 1080 of the AG352QCX. Now, that might not make a lot of difference in-game, but when using your screen for anything else on the desktop things become incredibly cramped with a 1080 pixel high 21:9 panel.

The downside is that you’re going to need a little more GPU power to drive this display, but it’s honestly not that much more taxing than a 2560 x 1440 monitor, and certainly nowhere near the GPU grind of a 4K resolution. That also means you’ve got a good chance of hitting the frame rate needed to match the 100Hz refresh and make the most of the monitor’s G-Sync support.

The AG352UCG uses the same 2000R curvature as the previous model, which is more pronounced than the likes of Asus’ Swift PG348Q or the Acer XR341CK, but the anti-glare panel coating means you don’t get too many weird reflections born of the panel’s sweeping arc. It also brings the edges of the screen in towards your peripheral vision to help immerse you in the game.

I’m not massively taken by the relatively large, shiny plastic bezel, but the stand is solid and provides a full range of movement so you can position it perfectly on your desktop. And, because it’s an AOC of the AGON variety, it also comes with a headphone hook on the side of the chunky monitor surrounds. It’s a little thing, but is superbly useful when you don’t want your expensive gaming headset being dragged across the ground. 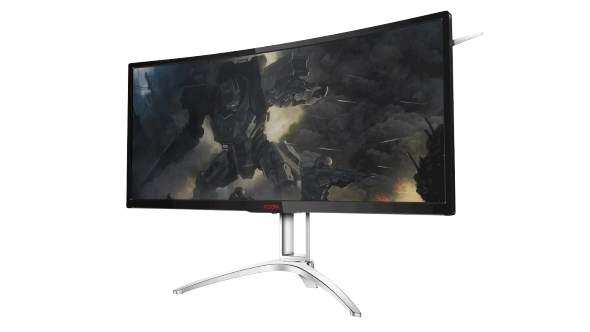 The AG352UCG is a completely different beast compared with the limited height 200Hz screen we tested before. It displays none of the ghosting and motion sickness the other panel clearly suffered from, producing sharp, vibrant images across its curvy expanse.

The high-resolution panel delivers excellent contrast performance, showing clear delineation between different colours and shades, and absolutely nails the black levels too. It’s the same story with the display’s white saturation too, meaning you’re not going to lose any detail whether you’re gaming in the olive drab surrounds of Battlefield 1, the oppressive darkness of Resident Evil 7, or the vibrant environs of Overwatch.

There is, however, a certain amount of colour-shift across the 35-inch screen when you’re looking at solid blocks. There is a very definite difference to the colour at the centre of the display compared with the extreme edges of the wraparound panel. It isn’t particularly noticeable in-game, though – only when there are large chunks of colour on display.

Even though it’s only sporting a peak luminance of 300 nits, the actual image on show remains crisp and clear, and the different game mode settings offer only very subtle tweaks to the display for different genres. With other monitors, even other AOC ones, I’ve often found manufacturer’s built-in modes to be far too aggressive and desperate to be obviously different to be useful.

The on-screen display (OSD) also feels a little more feature-rich than previous AOC monitors I’ve tested. It doesn’t have an unwieldy level of setting customisation, but lays out the important goodies in a clear and concise way. It’s all accessible via a little joystick switch under the AGON label at the front, though I did keep finding myself turning off the screen by pressing it down when I thought I would be selecting a setting. I’m a slow learner…

Within the OSD are the settings for the screens LEDs. It’s a gaming-focused product in 2017, so, of course, it’s going to have LEDs. There’s a strip under the front of the monitor’s surrounds as well as four slashes on the rear to really piss off any tournament competitors in a LAN environment. You can alter the brightness and switch between red, green, and blue too, depending on your allegiance. 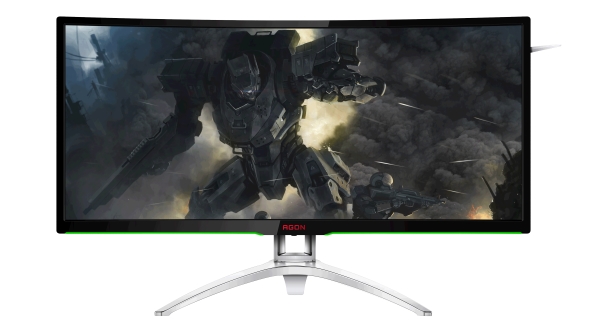 The act of boxing up a review sample probably informs my opinion of a product way more than the initial unboxing of it. My eye did grow moist as I cradled the display, gently lowering it back into its packaging, after all.

It was definitely not sweet sorrow parting from the AG352UCG; it really is a great gaming screen. It doesn’t quite have the image fidelity of the IPS-based Acer or Asus ultrawides we also recommend, but the panel in the AGON isn’t far off and one of the best VA screens I’ve tested. And it doesn’t have the same extortionate price tag either, at least not in the UK. As ever, this AOC screen is currently pretty pricey in the US, but keep your fingers crossed as that could change as more stock ships across the pond.

I love 21:9 ultrawide monitors – they provide a superior gaming experience than the traditional 16:9 displays – but they need a great panel and the right native resolution to make the most of that extra scale. Thankfully, the AGON AG352UCG has both, and I’m sure going to miss it sitting on my desk.