It’s 35-inches across, has an ultrawide 21:9 resolution, a VA panel and a 200Hz refresh rate. The AOC AGON AG352GCX ought to be such a drool-worthy gaming monitor not one pixel should be visible through its saliva-slicked coating. But the AOC is gob-juice free mostly because I’ve had it sat next to the Viewsonic XG2703’s beautiful IPS panel and it sure does suffer by comparison.

Check out our pick of the best gaming monitors you can buy today.

The ultrawide 21:9 aspect ratio though does make for a great gaming experience, offering you a broader viewpoint and potentially a tangible competitive advantage in racers and first-person shooters. Having that extra peripheral vision, enhanced hereby a slight curve to the panel, means it’s a lot tougher for folk to sneak up on you.

But, while 21:9 resolution support in gaming has improved – you no longer have to hack in ultrawide resolutions for most games – there can still be issues using such extremes of widescreen monitors in Windows. Mostly that’s down to panels with limited vertical resolutions feeling overly restrictive when you’re on the desktop… kinda like peering at your PC’s screen through a letterbox.

And that’s just one of my issues with this AOC…

Click on the quick links below to jump to an individual section. 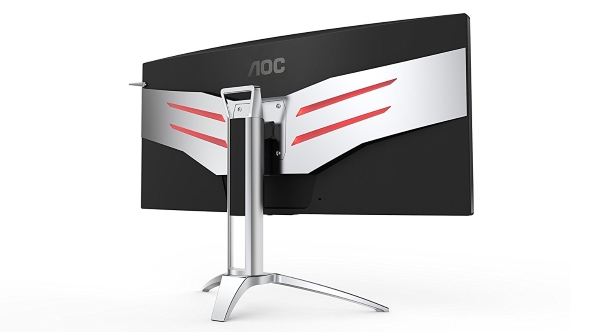 AOC have used an MVA panel to fill out the full 35-inch span of their £607 AGON AG352QCX ultrawide monitor. The MVA (Multi-domain Vertical Alignment) technology is almost a mid-way point between the budget TN and expensive IPS screens, delivering similarly wide viewing angles and a decent level of colour reproduction that makes them more akin to IPS than TN.

MVA screens are also cheaper to manufacture at this scale than IPS, and don’t have the washed-out downsides of TN, but are also capable of higher response times than the more expensive panel technology. This AOC display (I’m guessing it’s an AU Optronics panel) is rocking a 4ms grey-to-grey response time.

That’s not the only part of the monitor to be lauded for its speed, however, the refresh rate of the AGON AG352QCX is rated at a maximum of 200Hz. That’s on par with the Acer Predator Z301CI tested a little while back and pacier than our favourite 165Hz IPS monitors.

Supporting that 200Hz refresh is the Adaptive Sync technology which enables the AOC to offer FreeSync compatibility to suitable AMD graphics cards. That allows the screen to match frame rates with the GPU’s output to ensure a smooth gaming experience free of judder and tearing.

The 35-inch panel also has a pretty modest curve to it. It’s not quite as tight as the 1800R curve of the Z301, but more pronounced than either the shallow Asus ROG PG348Q or Acer XR341CK.

The big issue jumping out from the specs sheet though is the native resolution AOC have fitted into the AG352QCX. At 2560 x 1080 it’s not going to demand much more GPU power than a standard 1080p 16:9 screen, and will look great in-game, but on the desktop that stunted vertical resolution will end up crushing the space you have to operate in Windows.

Stretched out across 35-inches that relatively low ultrawide resolution means the pixel pitch is a lot broader than any of the other 21:9 screens I’ve tested. In practice that doesn’t make a huge difference, but will add to the general fuzziness I experienced using this monitor.

Last, but not least, is the headphone hook which folds out from the right hand side of the monitor chassis so you can hang your cans. Okay, that actually is least… 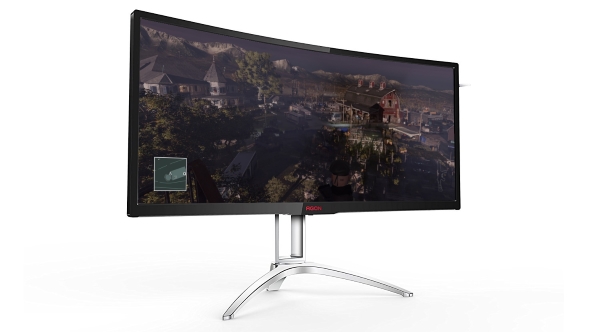 As a FreeSync monitor I figured I’d review the AGON using my reference Radeon RX 480. That makes sense, right? Well, not if you want to be able to hit the full 200Hz refresh rate easily anyways. For some reason the Radeon Settings application doesn’t allow you to change the refresh rate of your monitors, only giving you a breakdown of what settings they’re running at.

To actually get the refresh rate above the out-of-the-box 60Hz it was set at I had to dip into the Windows Display Adapter settings dialog, delve into the properties screen and select the refresh rate from the drop-down menu. And even then I was initially limited to 100Hz until I’d plumbed in a GTX 980 and played around at 200Hz before switching back to the AMD card.

With the GeForce card setting the refresh was as simple as booting up the Nvidia Control Panel and picking it from the drop down. I really don’t understand why it’s made so difficult using a card the FreeSync screen is meant to be designed for.

Once I had the AOC running at 200Hz though its refresh rate was a silky delight; beautifully smooth when VSync and FreeSync are holding hands and queuing up the gaming frames in perfect harmony. With a host of fast-paced games it ran as slick as a greased weasel, though I did detect a certain unpleasant haziness to moving objects on-screen.

It’s nothing to do with the FreeSync tech, however, something you might’ve seen on the first compatible monitors released at the advent of AMD’s tech. Even when the frame syncing feature is disabled the image can still be quite indistinct, with a ghostly blur trailing after objects in motion. The coloured player indicators in FIFA 17 were the worst culprits and definitely detracted from the otherwise smooth moving gameplay.

The static colour and image reproduction are relatively decent though. The 2000:1 contrast ratio delivers impressive contrast performance despite the black levels of the AOC’s panel not being that great. And that’s slightly odd given that VA panels are generally capable of better black reproduction than IPS. The white saturation of the display is better, but still not brilliant, and compared with the Viewsonic XG2703 the AOC’s whites are just a little yellowed.

One of the other places where VA screens ought to come good is in the viewing angles. And while the viewing angles of the AGON AG352QCX are pretty decent there is still some mild colour shift at the edges of the panel, most noticeably when you’re viewing it slightly off-axis.

In terms of the monitor settings the AGON is classic AOC. By which I mean it’s configuration options are relatively light on features, and for me most of them don’t do anything positive to the image either. The lightframe tech will brighten up the display, but will kill contrast and the FPS/RTS/Racing modes all seem to add a strange sharpening effect to the edges of objects on-screen, but don’t do anything for the trailing blurriness I found. 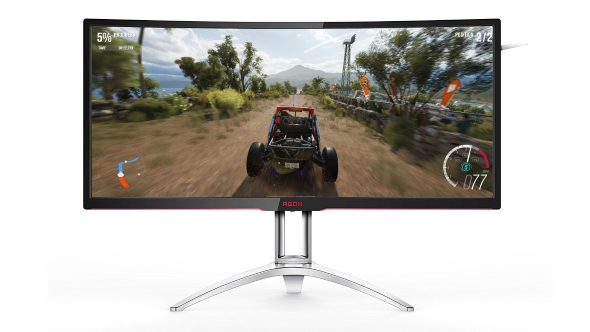 Like some technological PC gaming theme park ride I have a height restriction when it comes to ultrawide 21:9 monitors – if it’s got a vertical resolution of less than 1440 pixels it’s not allowed on. The AOC AGON AG352QCX then was on the back foot from the get-go. In-game I have no problem with the 1080 pixel vertical resolution, and if you’re only ever using your PC in Steam’s Big Picture Mode then you’d probably have no issue with it.

But that’s not realistic.

The beauty of the gaming PC is that it’s hugely versatile. It can be your window into the world of gaming as well as the place you write your magnum opus, edit your indie blockbuster or just generally interact with the world at large. In short, gaming isn’t the only thing you’ll do with this monitor and with such a narrow vertical resolution, in comparison with the broad horizontal space, it makes your desktop and anything else you do on your machine feel unnecessarily cramped.

Were the panel unutterably beautiful, with stunning, crisp visuals, then I could maybe forgive the resolution and admit the AGON would make a quality, more reasonably-priced, ultrawide gaming screen – especially if you don’t have the GPU resources to power a 3440 x 1440 display. At 35-inches across it’s a pretty vast panel and the curve brings those extreme edges in closer to give you a decent level of peripheral vision.

But there is that haziness to the AOC’s display in motion I just can’t get on with. Combined with my resolution issues that means if I’d spent anywhere near £600 on this monitor I think I’d probably be a bit disappointed with my purchase. That’s still not a bad price at all for such a big-screen monitor, but the image quality and resolution reservations quickly put the mockers on any recommendation I can make.