The AOC AG273QXP 27-inch gaming monitor marks a first for me, as it’s the first time I’ve ever used HDR. It’s not for a lack of trying, but that it still seems like an emerging technology in PC screens, despite HDR being around for over half a decade on TVs. I could describe the bliss of seeing the glaring oranges of Doom Eternal’s Hell on Earth or how the bright colours originally had me staring in awe, but unfortunately, first impressions are fleeting with this £423 display.

Out of the box, you get all sorts of goodies, including some blinkers for the display, should you decide that the sleek borderless look is not what you want. Generally, it’s quite easy to set up, though I did have a bit of trouble slotting the display itself into the mount. It might take a couple of goes, but you won’t need to bother again once you’ve got it standing.

If you’re looking for a display that you can swivel to a ‘tate’ mode, this one will do nicely. The only issue is that it only swivels in one direction, so if the prongs on the tripod’s feet are positioned at the wrong angle, you don’t get a full rotation.

Setting up the monitor itself can also be a tad fiddly, but that’s mostly because of the bulk. I find it a lot easier than my Asus PG279QE 27-inch display to plug in cables and get it where I want it. It supports up to two HDMI and two DisplayPorts, and both are easily accessible.

While I’m a fan of being able to adjust the monitor’s position with relative ease (despite the bulk) and manage to get it to sit comfortably at eye level, the base hogs quite a lot of the desk space. Its tripod feet are needlessly almost as long as the screen itself. The result is that I now struggle to fit two 27-inch displays and my PC on my gaming desk, whereas with my other 27-inch monitor I’m able to fit two side-by-side, alongside a PS5 and a PC on the same desk. 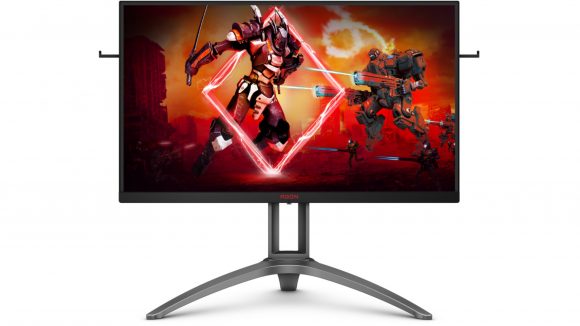 This model doesn’t seem to be available in the US.

The other worrying thing about the AG273QXP is just how hot the bottom gets. Compared to my other display, it is a full ten degrees Celsius warmer on average. I did initially wonder if the programmable LED lights at the bottom were the cause of this, but switching it off in the settings did nothing. With no ventilation, it feels hot to the touch, harkening back to the days of the now-defunct plasma HD TVs.

But how does it run? As a display capable of 1440p and a refresh rate of 170Hz, it does the basic job really well. I’ve thrown a bunch of games at it with my medium-spec rig and there’s been no instance of screen tearing or loss of image quality if the game doesn’t feature HDR support. It’s designed with FreeSync and G-Sync compatibility in mind, and while I can only speak for G-Sync, I have to say that it’s arguably as good at it as the PG279QE. If I was looking for a display that just does the fundamentals, then I would wholeheartedly recommend it, particularly for its price. 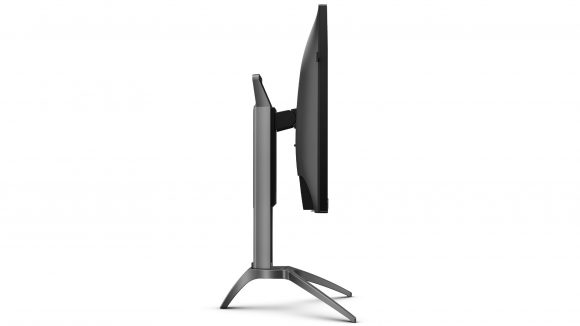 Where it falls flat on its face is with its implementation of HDR. It has a Display HDR rating of 400 nits, which is average for entry-level monitors around the same price point, and when it works, HDR shows stunning colours in lighter areas. Sadly, it’s marred with two big negatives that let the entire display down.

The first is that some brighter colours tend to blend into each other with moving images, even without motion blur turned off, so there’s a loss of detail compared to non-HDR displays. For example, the intro to Ori and the Will of the Wisps – a game that usually looks gorgeous in HDR – has the main character clamber aboard Ku as she’s about to take off for a test flight of her upgraded wing. Ori emits light, and I can see individual feathers when she’s standing still, but these merge into a blue mass whenever she moves. It also happens during the intro scene in Shadow of the Tomb Raider when Lara is examining a Mayan shrine, as the mud on her arm magically disappears and reappears whenever she moves too quick.

The other downside, and the bigger issue that plagues most DisplayHDR 400 rated monitors, is that I lose much more detail in dark areas, and gain nothing in contrast. Going back to Ori, a game that’s filled with black hues, details that would otherwise show without HDR are almost always absent until the glow around Ori highlights them. 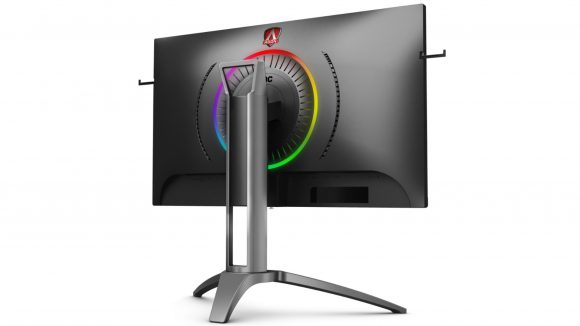 Another scene in Shadow of the Tomb Raider, where Lara retires to a small Mexican town with her friend, further highlights the sharpness of the vividly coloured areas and the dullness of greys and blacks to a striking level. I also booted up Doom Eternal and that presents a whole different issue with dark colours, in that I’m constantly unsure if I’ve set the HDR White Point to the optimal level. On its default settings in the HDR Calibration, it just seems too dark, and other levels just never seem right. With these two games, it’s also clear that you have a narrow viewing angle to see any detail in darker areas compared to other similar monitors.

There are several presets built into the display to tinker around with, but they require you to reboot your computer and head into your PC’s BIOS before you change anything to do with colour setup and luminance. The control method for changing the settings is also confusing and unintuitive. Its single thumbstick navigation often enables things I don’t want, or closes the window before I’m finished. Worse yet, the presets generally look worse than the default DisplayHDR setting. In my entire time with the AG273QXP, I can’t find the right balance for how anything should look for HDR colours. All I know is that the image is far from perfect. 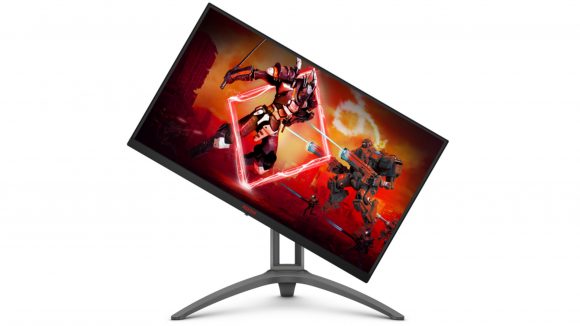 There seems to be an expectation for the user to set up HDR calibration optimally. If, like me, you have never experienced HDR before, then you likely won’t know exactly what you’re looking for when it comes to configuring these settings. It seems as though there are no resources to help with this, too, and even if there were, I’m not convinced you’d see improvement. I wish my first experience of HDR, which I must emphasise wowed me initially, held up to scrutiny once I probed a bit further. It just doesn’t display darker colours well enough for my liking and blurs bright lights in motion.

It’s worth noting that these issues are somewhat common in other DisplayHDR 400 competitors, as there’s only so much you can ask of the entry-level rating. That said, by-product or otherwise, it just doesn’t scratch the itch like higher rated displays, which don’t cost that much more.

I’m saddened that the HDR here is a bust, and I’m not a fan of the overly sized tripod, but if you’re looking for a 1440p display with up to 170Hz and both G-Sync and FreeSync support built in, the rest of the AOC AG273QXP is worth considering. Still, it pales in comparison to competition like the Samsung Odyssey G7 with a higher DisplayHDR 600, which starts at £100 more at RRP and is currently just £6 more during Cyber Week.

The AOC AG273QXP 27-inch is a great monitor for those looking for FreeSync and G-Sync compatibility, 1440p resolution, and an impressive 170Hz refresh rate, but its sloppy HDR lets it down. There are simply better options out there.