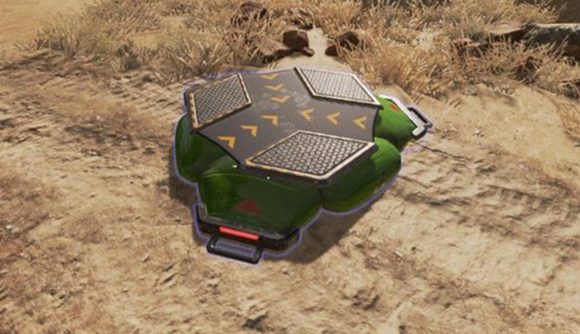 Jump pads have started to appear in Apex Legends, and they appear to be a teaser for the upcoming release of Octane. That Legend name has appeared in a host of leaks and rumours up to this point, and by now he seems to be a lock as the game’s first new Legend. Some of those same rumours suggested his ultimate ability would drop jump pads – and it looks like Respawn is playing off of those expectations.

The game’s subreddit is now filled with reports of jump pad appearances, as PC Gamer notes. The pads have mostly been appearing around Market, and they work exactly as you’d expect them to. Walk onto one, and you’re sent flying into the air. For now, there doesn’t appear to be a limit on how many times a pad can be used, so you can bounce around without restriction.

Octane’s abilities were apparently leaked weeks ago, and though the report seemed sketchy at the time the pieces have started to line up. His ult is supposed to be called Launch Pad, which will drop on of these items into the world. A Swift Mend passive is said to automatically restore health over time, and a tactical called Adrenaline Junkie is supposed to drain 10% of Octane’s health in exchange for eight seconds of boosted speed.

At this point, those abilities are looking like a lock, but the rumours have been wrong before. A rumoured Octane release date was supposed to hit on March 12, but that obviously hasn’t come to pass.

The jump pads, at least, are real – and Respawn devs have responded to more than one report about the item’s appearance with knowing emoticons on Reddit.

The Apex Legends battle pass is expected to appear alongside Octane, and that rumour’s backed up by an early posting to the Origin store page which linked the two together. That final update has to drop any minute now. (Right?)