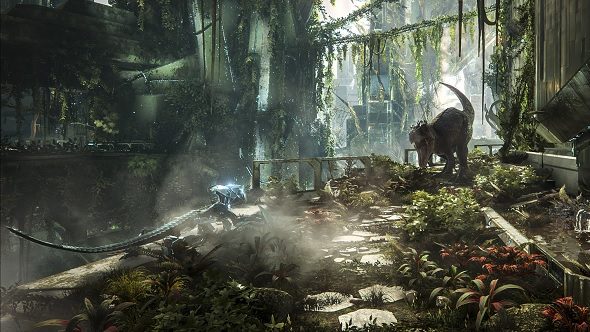 Ark: Survival Evolved’s next expansion, Extinction, marks a return to Earth, as well as an end to the game’s story – and from the looks of things, the plan is to wrap things up with a bang.

Studio Wildcard unveiled the first trailer for Extinction this week, and it shows a tyrannosaurus rider exploring an abandoned planet Earth, with its skyscrapers and roads being reclaimed by nature. Pterodactyls fly overhead, but there are other life forms making the world their home as well. We see a small, synthetic creature confront another T-rex in the city.

The footage cuts to the wilderness, where we see a towering ribcage before being introduced to Extinction’s biggest addition: a massive Titan, which looks a bit like those evil dog creatures from Ghostbusters, but large enough to swallow a tyrannosaurus like a scaly meatball.

We’ve got ARK: Survival Evolved on our list of the best survival games for PC.

According to Studio Wildcard, Extinction is meant for veteran ARK players, and is a return to an “Element-infested, ravaged planet filled with fantastical creatures both organic and technological.” Earth is now dominated by these towering, roaming Titans, and you’ll have to defeat them in order to complete the ARK cycle and “save Earth’s future.”

The environments shown in the trailer certainly look interesting and varied, with cities effectively turned into jungle mountains, and snowy plains holding Elemental growths and high-tech spires of their own. Here it is:

Ark: Extinction launches November 6th, and in the months leading up to its release you’ll be able to find Explorer Notes in Ark that can be collected and will unlock new skins. There are also new Tek-themed dino variants to find in ARKs, so unless your character has been captured and jailed in some awful player-created oubliette, now’s a fine time to head back in to run with the dinosaurs.