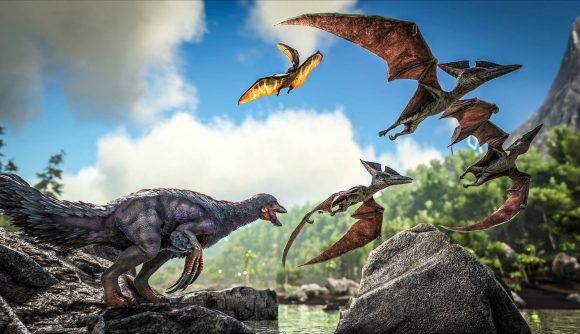 Ark: Survival Evolved players get up to all sorts in Studio Wildcard’s action-adventure game. It’s not all about surviving, either – a quick peek at the Ark: SE subreddit reveals a whole bunch of incredible creatures bred and settlements built by its fanbase. Now, the developer is trialling a new segment in its ‘Community Crunch’ posts designed to capture players’ shenanigans as metrics, revealing what they get up to in-game.

“In the past, the community has expressed an interest in analytics, so we’d like to pilot a new segment called ‘Last Week In Ark’ that highlights general analytics and statistics we collect on the back-end,” the studio announces in its latest Community Crunch post. In the first sample of this feature, Studio Wildcard offers a smattering of graphs that give an idea of how many kills there have been by wild dino type and players killed by weapon type across PC, PlayStation 4, and Xbox.

For example, it looks like Raptors have come out on top across all three platforms in terms of kills, there being a whopping 130k-ish kills in total over the week 10-16 January. PC players have accounted for a big ol’ chunk of those, too, as you can see below.

These are just an early idea of what the Ark devs might capture though, and they want to know which parts of players’ adventures the community would like to see become part of this feature going forward. “Consider this a sample of things we might be able to provide if there is community interest,” the post adds. “What types of things are you interested in seeing? Are there particular metrics that interest you more? Sound off and let us know!” 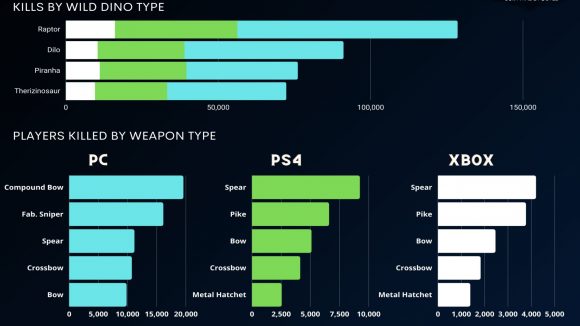 So far, players have been requesting various different metrics, such as how many eggs get hatched, how many clones get made, and what kind of dinos emerge each week. Others have asked for things like the top types of dinos tamed, as well as characters created, common ways players have died in-game, consuambles, well, consumed, and more along those lines.