Arma 3 is getting another Creator DLC, and this one is another trip back to Cold War-era Europe. CSLA Iron Curtain is set for release later this year, and will take players to a 256 square kilometre area of the 1980s border between Czechoslovakia and West Germany.

CSLA Iron Curtain is part of Arma 3 developer Bohemia Interactive’s Creator DLC model, in which Bohemia publishes the work of third-party studios and modding teams under a revenue sharing agreement. In the case of CSLA Iron Curtain, that studio is Czech Republic-based CSLA Studio – the initials standing for Československá lidová armáda, or the Czechoslovak People’s Army. This encompassed all of Czechoslovakia’s military forces from 1954 until the Velvet Revolution and the fall of Czech Communist Party.

In CSLA Iron Curtain, players will find 1980s-era CSLA and NATO forces, equipped with weapons and vehicles of the time. US forces will have the M113 APC and UH-60 ‘Huey’ helicopter, while Czech forces will field the T-72 main battle tank, OT-62 APC, and Mi-17 transport chopper in the military sandbox game. 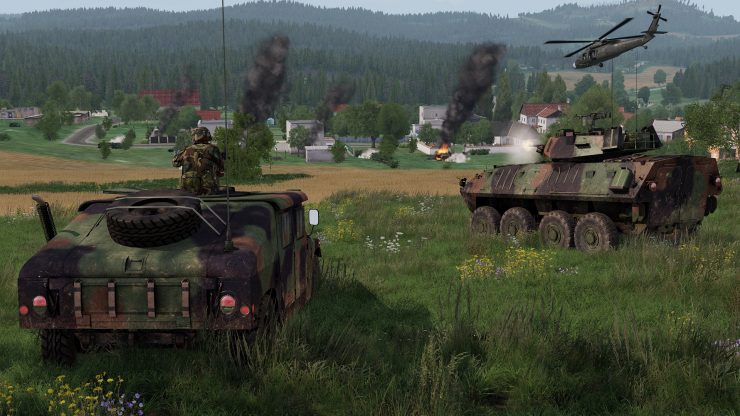 The action takes place on a new 256-square-kilometre map called Gabreta, which Bohemia says features “deep forests, windy mountains, and calm valleys”. The natural beauty of the landscape is scarred by the heavily fortified frontier between 1980s West Germany and Czechoslovakia. For Czech Republic-based CSLA Studio, “this particular DLC stays very close to home by exploring the country’s contemporary history and taking a look at what life in Czechoslovakia … during the 1980s could have been like.”

Bohemia and CSLA Studio have invited select members of the Arma 3 community to participate in a small beta test that will run over the course of the next several weeks, which will help identify any outstanding technical issues prior to official release. There’s no pricing or date set for that yet, but Bohemia plans to have the pack available for sale before the end of the year.

As with the last creator DLC, Bohemia will publish compatibility data on the Steam Workshop when CSLA Iron Curtain launches, which will allow players without the DLC to play on multiplayer servers with players who do. You’ll still need to buy the pack in order to use the new map and access the single-player missions, however.