At this point, the Facebook joke group suggesting a raid on Area 51, the secretive military base in Nevada that sits at the center of any number of conspiracy theories, has reached mythic status – the US Air Force has even issued an official warning against attempting such a caper. Since the raid itself is probably not going to happen, a group of Arma 3 players decided to stage it in the game.

YouTuber OperatorDrewski captured footage of the raid. In it, a team of ‘civilians’ armed only with SUVs and explosives, has to disable radio towers around Area 51 and then find several control trucks hidden within geodesic domes scattered around the site. Another group of players, as the Area 51 military garrison, has to stop them from doing this.

The result is a remarkably compelling bit of footage. The civilians hit an early setback when one team accidentally blows themselves up trying to disable a radio tower, but one player – named Jami – manages to steal a fighter jet off the defenders’ tarmac.

This throws the defensive team into disarray. Most defenders had taken to the skies in jets and helicopters, but the civilians’ clever use of decoy flares had drawn most away from the base itself early in the raid. In her jet, Jami harasses the defenders, allowing the civilians to penetrate the base’s walls. 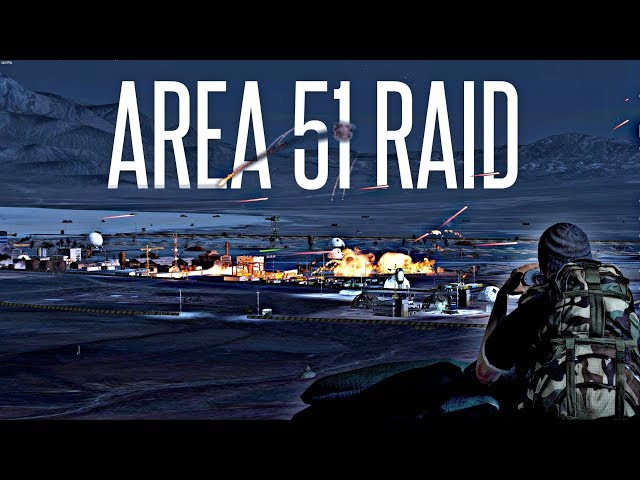 I’m not sure which moment is my favorite. There’s the narrow escape Drewski manages to pull off in a stolen military truck as he’s pursued by an attack chopper, the impressive MLRS launch, and the moment when Drewski’s team links back up with Jami to pick her up in their own stolen helicopter.

And sure, it’s a goofy, meme-heavy premise, but the raid manages to show off Arma’s impressive scale and potential for organically generating truly spectacular moments. Obviously, it can’t support anything like the 1.4 million Facebook users who have said they plan on attending the raid, and to my knowledge there isn’t a mod that allows Arma players to ‘Naruto run.’ But Drewski and company made it work all the same, and probably with much better results than a real raid would end up with.