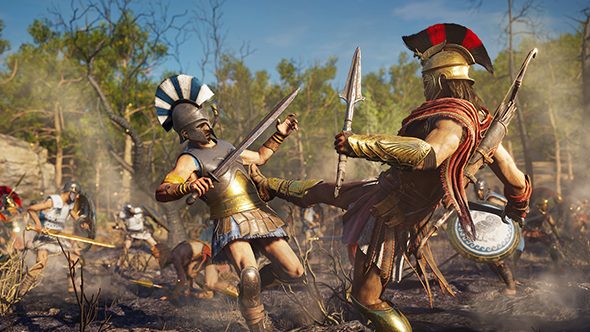 Assassin’s Creed Odyssey will not focus on the actions of the Assassins and the Templars. In an AMA on Reddit, the game’s creative director, Jordan Dumont, revealed that while Odyssey is “absolutely” an Assassin’s Creed game, the Assassins themselves will appear differently to how fans of the series may be used to seeing them.

Assassin’s Creed Origins, the series’ last outing, was – as the name suggests – an origins story for the Assassins, which were set up by its main character, Bayek. In his story, Bayek didn’t battle the Templars themselves. Instead, he fought against The Order of the Ancients, a collection of proto-Templars who would shape the way in which the organisation would operate over the coming centuries.

But while Origins is set in the middle of the first century BC, Assassin’s Creed Odyssey takes place during the Peloponnesian War between Athens and Sparta. That war happened between 431-404 BC, nearly 400 years before the events of Origins, meaning neither the Assassins nor the Templars had officially been formed.

In the Reddit AMA, Dumont says that “AC games are about experiencing a key moment in history, a place and time that were host to major historical events,” rather than telling a story that is inherently about the Assassin Order itself. Despite that, the game will still focus on the overarching lore of the Assassin’s Creed world. Dumont says that “from a lore perspective, we wanted to tell the story of how the First Civ artifacts [otherwise known as Pieces of Eden] created what would become the Templars vs Assassins story, which took place long before the Brotherhood.”

One of those Pieces of Eden will be the Spear of Leonidas (of 300 fame), which will be an upgradable weapon you can use throughout the game. Dumont said that the spear wouldn’t be the only Piece of Eden you’ll discover during the game, but wouldn’t say more for fear of spoilers

The Assassin’s Creed Odyssey release date is October 5, 2018, so you won’t have to wait too long before you can head to Ancient Greece and wield the Pieces of Eden for yourself. You can check out more than 30 minutes of gameplay footage in the video above.