Ubisoft is going balls deep with a new mercenary added to Assassin’s Creed Odyssey today. The new mercenary you can now hunt down in the game is called… wait for it… Testiklos the Nut. Wow. Yes, Ubisoft has gone there.

He comes with a description that doubles down on the joke. “Having been separated quite early in his life from his half-brother Testikles, his mood has been unstable ever since. He never felt as secure than with his own kin, so he deals with the separation by breaking things.”

But it doesn’t stop there. Why would it? Testiklos carries a heavy blunt weapon called Testiklos’s Nutcracker. What else? You’ll acquire it upon defeating him. The description of the weapon is as such: “The only thing Testiklos loved more than smashing things were fresh nuts. Smashed nuts.” Sounds nasty. Better be careful when trying to bludgeon big ol’ Testiklos, then.

As is alluded to in the description of Testiklos, this isn’t the first time such a ballsy joke has been made in Ubisoft’s epic action-RPG, as Testiklos is actually the brother of Testikles. You may remember him as the large, drunk Olympic athlete you have to recruit for a quest in the main story. And then quickly replace as he falls into the ocean and drowns. The oaf. 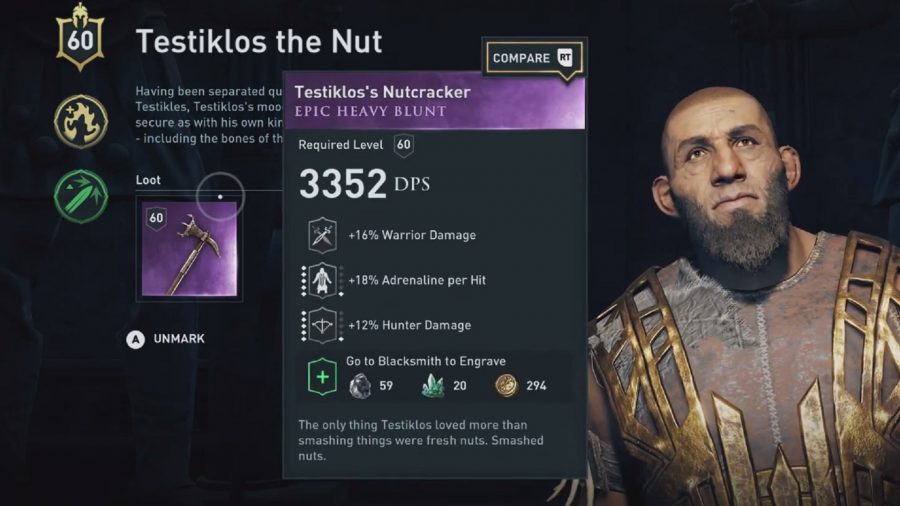 And who can forget that the large pair of testicles you can hang from right at the beginning of the game? That’s not any old scrotum, mind – it’s actually a statue that depicts the lightning junk of Zeus himself.

Related: Play through all of the best RPGs on PC

Yes, this is all very silly, but the whole game is one big goof. I’m personally very happy to see Ubisoft lean further into the absurdity of Assassin’s Creed Odyssey. This game is wild. And full of bollocks.