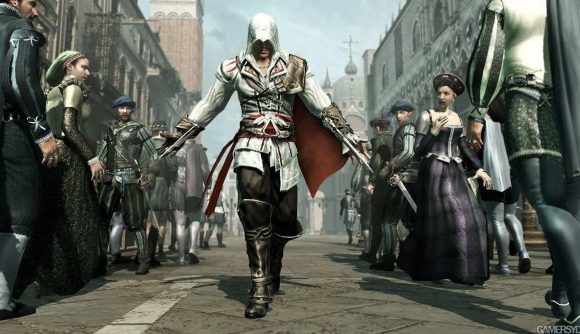 One of the hallmarks of the Assassin’s Creed series is unlocking the world map by climbing towers. Going back to the earliest entries, seeing the entire game has involved traversing a set of waypoints, and the feature was so effective many other series, including Far Cry and The Legend of Zelda, have adopted it.

Patrice Désilets, director of the first two Assassin’s Creeds, was asked at EGLX in Toronto (thanks, Destructoid) if he feels a bit lumbered by being known as the “Assassin’s Creed guy”, and responded by saying sorry for the incidental influence. “A little bit! If you’re going to spend years on something I hope that happens,” He answered. “Breath of the Wild, wow! That was a game where you could do anything, once you finished the first half hour or so. Now, you’re going to just climb towers and unfog the rest of the map. Sorry – it’s my fault!”

Désilets says that having those first Assassin’s Creed games behind him helped get meetings for his new studio, Panache Digital Games. He’s struggled to return to the series as player, but holds no ill-will towards Ubisoft, and is wholly dedicated now to the future with Panache.

Panache Digital Games’ first release, Ancestors: The Humankind Odyssey, a survival game about keeping primates alive in prehistoric Africa, came out in August. It’s the first project from Désilets since Assassin’s Creed: Brotherhood in 2010, which he left during development.

Ancestors was published by Private Division, who put out the console version of Kerbal Space Program, and has just helped Obsidian Entertainment get The Outer Worlds out the door. It’s an Epic Games store exclusive until next year.

You can check for any radio towers in Ancestors: The Humankind Odyssey right now on the Epic Games store.