The first thing to make clear is that this mighty, AMD-powered, Republic of Gamers laptop certainly ain’t no meek and mild Ryzen Mobile notebook. This isn’t about efficiently balancing a low-power CPU core with an elegant, built-in GPU solution – this is all about raw performance. Hell, it is an Asus Strix gaming laptop after all.

No gamer worth talking to plays on a trackpad – you’re going to need the best gaming mouse to go with your gaming laptop.

Asus haven’t waited for AMD to create a high-performance mobile version of their Ryzen CPUs – indeed, it’s looking increasingly unlikely they will do ahead of the 7nm Zen 2 – they’ve just gone full steam ahead with the Asus ROG Strix GL702ZC and dropped an octa-core Ryzen 7 desktop CPU into their standard Strix laptop chassis.

They’ve used the Ryzen 7 1700 inside the Asus ROG Strix GL702ZC – not to be confused with the GL702V – and that means you get the full eight-core, 16-thread CPU monty. That’s getting on for mobile workstation-level processor performance from a surprisingly affordable machine.

Obviously, ‘affordable’ is very much a relative concept when it comes to gaming laptops. The $1,505 (£1,350) price tag is still top-heavy, though it is a good chunk cheaper than an equivalent machine with a GTX 1060 and quad-core Intel CPU inside.

The GPU at the heart of the AMD-friendly Strix is of the Polaris Enhanced variety, meaning we’ve got an RX 580 card sitting inside that surprisingly understated chassis. That’s a moot point as Asus have clocked down the GPU to operate at the same sort of level as the original Polaris-based RX 480 cards. Given that it has to operate within the power and thermal constraints of the laptop form factor, however, that’s still rather impressive.

It is only the 4GB version of the card, meaning that in graphically intensive open-world games, for example, you might still have been better off with the extra couple GBs that a GTX 1060 would afford you. That’s not to say the RX 580 isn’t a powerful little GPU, especially in this desktop/mobile hybrid form.

In fact, it serves as further evidence that modern graphics silicon no longer needs to be excessively hobbled just to get it running in a machine that won’t melt the flesh from your legs, whether you’re a dyed-in-the-wool GeForce gamer or are flying the red Radeon flag. For the record, I’m not calling Nvidia fans sheep, or AMD GPU fans commies, that’s just how the words rolled off my keyboard. Honest.

Alongside the impressive GPU and CPU combination, you get a healthy 16GB of speedy DDR4, but, sadly, it’s laid out in a decidedly unhealthy single-channel configuration. That’s a shame given the powerful processing performance on offer with the Strix, and the fact you could almost get away with running it as a mobile workstation. Halving the available memory bandwidth becomes, in those terms, a bit of an issue. Sadly the Strix chassis isn’t that conducive to homebrew upgrading so adding another 16GB SODIMM yourself isn’t really an easy option. 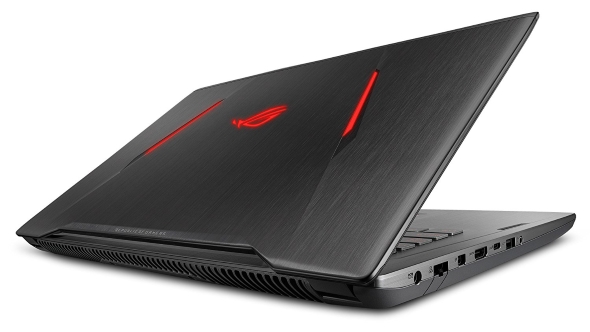 While the lovely IPS screen is capable of supporting the AMD FreeSync technology, you are only getting a solid 60Hz refresh rate instead of the 120Hz you get with the G-Sync panel in the pricier GL702V. Still, the Nutella-smooth gaming you’ll get out of the RX 580/FreeSync combo looks great on this bright, vibrant panel.

And, with the RX 580, you also get the excellent AMD Adrenalin driver software. The latest AMD drivers bring with them in-game controls and recording that make Nvidia Shadowplay look positively last-gen.

In what is now a standard setup for a modern gaming laptop it contains both 256GB M.2 SSD and a 1TB HDD for data storage. It does seem odd that Asus have kitted out the AMD-focused Strix with different models of each compared with the Intel/Nvidia machine, especially when the Seagate HDD is of a slower variety, too.

But it’s not the storage, memory, or screen that makes this Asus laptop such an interesting laptop, it’s that Radeon/Ryzen combo. That’s what makes the Strix completely untouchable when it comes to processing power and means it’s a seriously competitive gaming machine too.

And, if you’re into that sort of thing, it makes for an excellent VR rig as well. I’ve long been espousing the fact that gaming laptops are the perfect devices for virtual reality, given their inherent mobility and the constantly attached monitor. Few of our desktop gaming PCs are in a place with the space to make VR an experience that doesn’t have you smashing ornaments, light-fittings, or elbowing through stud walls.

You’ll also have to go down the expensive mobile workstation route if you want a laptop with the sort of on-the-fly video/image rendering performance of this Asus machine, and that makes it a very tempting device for around $1,500. Here, we’d normally be talking about the fact that the price of gaming laptops is hard to swallow given the sort of machine you can put together for the same price on the desktop, but given the current price and paucity of graphics cards that’s become a bit of a tougher argument to make. 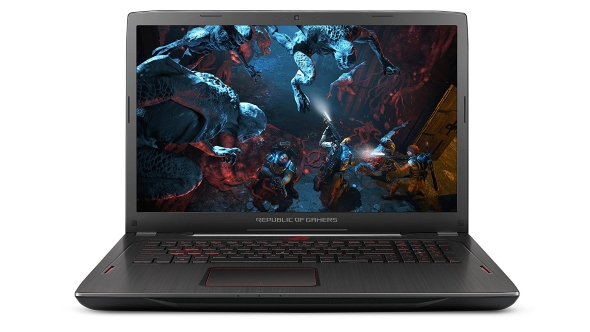 Physically, the Asus ROG Strix GL702ZC is a rather bulky beast, with a chassis that’s ever-so-slightly chunkier than its Strix siblings, but considering the level of power and cooling those desktop components require it really is quite impressive. I did have a few issues with our review unit’s trackpad refusing to function on boot, but the ol’ lid-closing trick was enough to nudge the narcoleptic pad out of its slumber.

Those mild quibbles aside it’s actually one of my favourite ROG laptops I’ve tested to date. The GTX 1070-powered Strix is arguably the better bet for hardcore gamers, given the similarity in pricing, but the processing power in the Ryzen machine means for anyone with a proclivity for productivity, or who craves more CPU juice than a standard mobile Intel chip can deliver, it’s perfect.