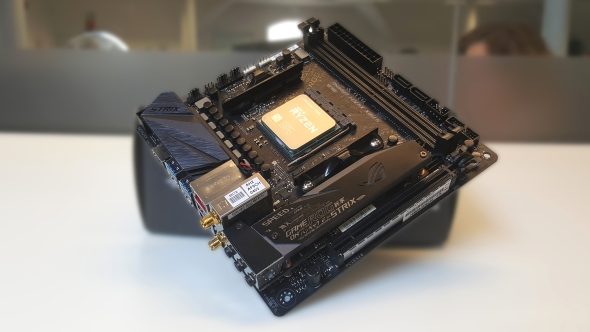 Just look at it. Seriously, just look at it. It’s diminutive, powerful, and so damned pretite. Yeah, I’m so taken by the looks of the Asus ROG Strix X470-I Gaming that I’ve even gone to the effort of making up my own portmanteau for it… you’re welcome. It’s the first mini-ITX AM4 motherboard we’ve tested for the second generation of Ryzen processors and it’s a bit lovely.

The new micro Strix is a tiny AMD Ryzen board, with all the bells and whistley things of its more large-scale siblings, but with a modest price tag and only a slight hint of performance compromise.

Check out our pick of the best AMD gaming motherboards around today.

Using the updated X470 chipset, the Strix is primed for the latest AMD Ryzen 2 processors, and what does that mean? Well, outside of some extra I/O performance and USB compatibility the latest top AMD chipset doesn’t really deliver all that much over and above the older X370 chipset. So, who’s excited about those upcoming B450 boards then? Anyone, anyone?

Anyways, back to the lovely li’l Asus ROG Strix X470-I Gaming. In terms of feature set it’s always going to be moderately limited by the sheer scale of the board. When you’re trying to pack ATX motherboard features and performance down into a mini-ITX form factor then something has to give, and inevitably it’s going to be the number of sockets on offer. 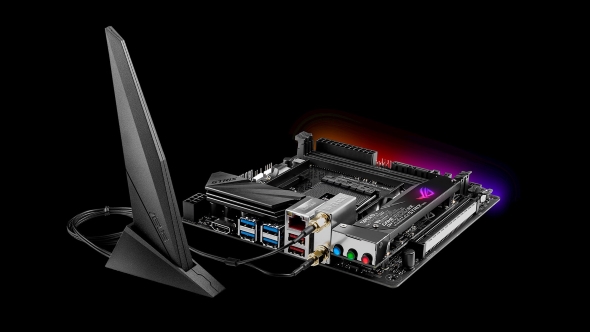 The mini-ITX footprint is a harsh mistress. She only affords the Strix a single PCIe slot and one M.2 mounted underneath the board and another in a funky bunk-bed style mounting up top, along with the shielded audio board. But the fact Asus has squeezed in twin M.2 slots is impressive – though I wouldn’t fancy being the toasty SSD mounted underneath the board with no room to breathe. There’s that and the fact if you populate that slot with a PCIe SSD it will knock back the x16 PCIe connection down to a lowly x8 version.

You also get four SATA 6Gbps connections as opposed to the six which come as standard with all the other X470 boards we’ve tested. The USB expansion potential is also more limited, with fewer connections and no Type-C options.

But who really cares about any of that? I mean, you can’t really expect all the ATX goodness in a board that’s less than half the size of big boy motherboard. So that means it’s really all about how well the wee board performs and whether the inevitable compromises on that front are acceptable, not about the compromises on the various connections. 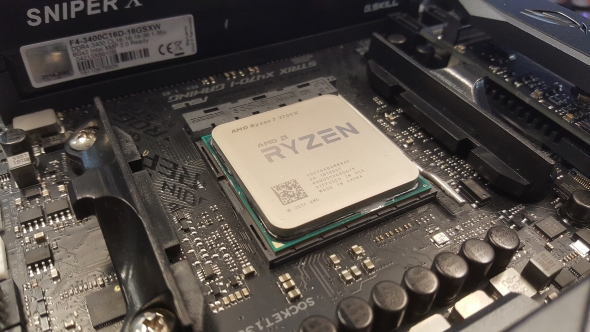 And yes, there is some performance delta between Strix and the full-scaleAsus ROG Strix X470-F Gaming we reviewed a little while back. But then, that board is still one of the quickest X470s around, and considering this X470-I Gaming performs at almost the same level as the expensive Gigabyte X470 Aorus Gaming 7, it’s not doing too badly at all.

In GPU terms it’s a bit of a mixed bag, with its 3DMark scores being a little below the competition, but with its Doom performance sitting right at the top of the benchmark tree Asus’s gaming heritage is plain to see.

Unlike its larger X470 Strix sibling, however, it doesn’t get your chips too hot, or suck a whole heap of juice from the wall either. The Ryzen 7 2700X was noticeably cooler in this than the ATX version, and even at peak performance drew around 50W less power, too. Our one concern on that front is the heatsink sat atop the power components on the board did occasionally get searingly hot to the touch.

The Strix X470-I Gaming is also a pretty impressive overclocker, letting us hit the same 4.3GHz that the other full-fat Asus boards achieved. That’s higher than we managed on either of the MSI or Gigabyte X470s we’ve tested, so that’s pretty good going for a little one. 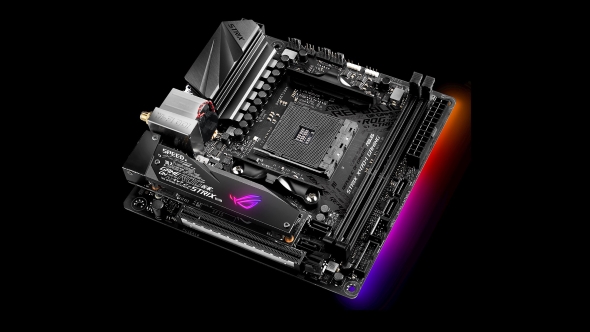 So, how’s that for compromise? Sure, you’re not going to get the absolute highest performance out of your shiny new Ryzen 2 processor, but you’re still barely leaving any tangible CPU speed on the table. The cuts Asus has made to specs sheet are entirely understandable, and its managed to squeeze in some features we didn’t expect – such as the secondary M.2 socket and shielded audio.

And, what’s more, Asus has done all this without adding a hefty premium on top. Often you’ll find mini-ITX boards given large price tags, partly down to their novelty and partly down to the fact that if you’re looking for a small form factor board you’re likely an enthusiast who might be willing to pay. Now, at $210 (£189) it’s by no means a cheap AMD board, but it’s less than a lot of the standard ATX X470s we’ve seen.

With the Asus ROG Strix X470-I Gaming we’ve got a powerful, pretite motherboard with all the features you could need and almost all the performance you could want.