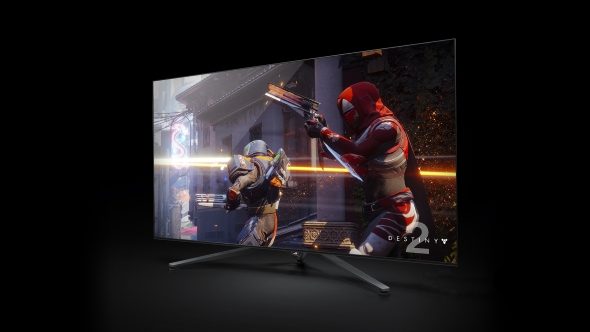 Asus has listed its ROG Swift PG65 Big Format Gaming Display that Nvidia unveiled at CES back in January. It’s interesting timing with rumours from retailers of the 27-inch 4K G-Sync HDR Swift being put on hold after lacklustre reviews of what could have been the ultimate gaming monitor. But can the 65-inch monster deliver on the promise of HDR PC gaming where the smaller 27-inch panel couldn’t?

Like the PG27UQ the upcoming PG65 offers a full 4K resolution with a peak luminance rating of 1,000 cd/m2. Whether that will be enough to really deliver on the promise of HDR is tough to say as it’s not just about how bright the panel can go, it’s how it handles detail in the darkest of scenes.

If you don’t want to spend a few grand on a screen these are the best gaming monitors.

This isn’t the only Nvidia BFGD that’s set to launch this year, with Acer and HP also set to join in on the massive monitor game. But they will all use the same panel, so if that can deliver then it’s good news for all three. Sadly, I wasn’t so taken with it when we had a hands-on test with the Big Format Gaming Displays at CES…

The panel in the Asus ROG Swift PG65 is a 65-inch VA from AU Optronics, the same manufacturer that made the IPS-a-like display used in the disappointing Asus ROG Swift PG27UQ, and offers a 120Hz refresh rate, G-Sync HDR support via the new ~$500 Nvidia module, and has a Shield TV box built into it. 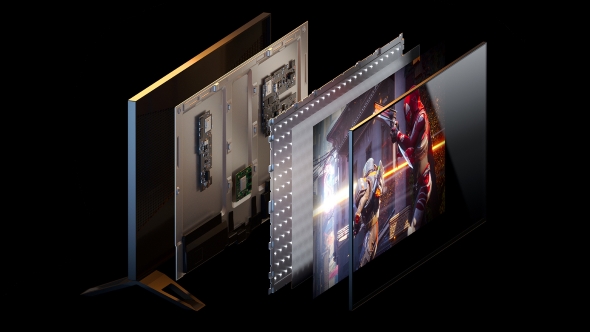 The 120Hz variable refresh rate could be key to how well the HDR visuals work on this new screen when it’s plumbed into a PC. The PG27UQ had to really push its panel to hit the rated 144Hz refresh rate, so the PG65 might not have to work its own display so hard to nail 120Hz gaming.

Because it’s set to be a VA panel – it’s unlikely AUO would produce a specific AHVA (its version of IPS) panel just for this likely limited run of products – it’s probably going to be a 65-inch display taken from a HDR-capable TV. With the processing removed, the G-Sync module and Shield hardware in place, it should become a decent gaming monitor.

And the VA panel should also be better at black levels, and therefore hopefully reproducing the detail in dark HDR scenes, than the IPS-ish screen used in the PG27UQ. 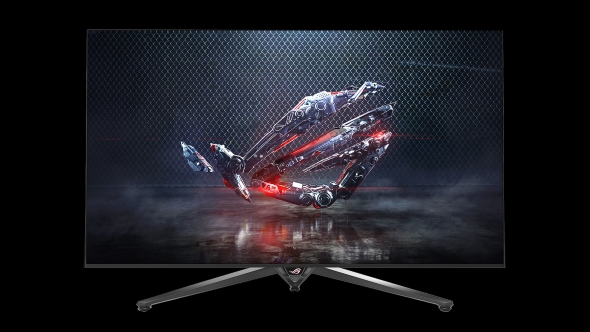 Unfortunately it’s still going to suffer from the same issue with the signal bandwidth over DisplayPort 1.4. That means at 120Hz and 144Hz the 27-inch screens have to use colour compression, and that drops image fidelity by a fair way – something which could be even more noticeable blown up to 65-inches…

The new Asus listing doesn’t go into any real detail about the specs of the monitor, however, aside from offering the basic highlights. So we don’t know any more about the panel, the number of discrete lighting zone in the full-array backlight, when it’s going to launch, or the inputs on offer. We also don’t know how much it’s going to cost either. 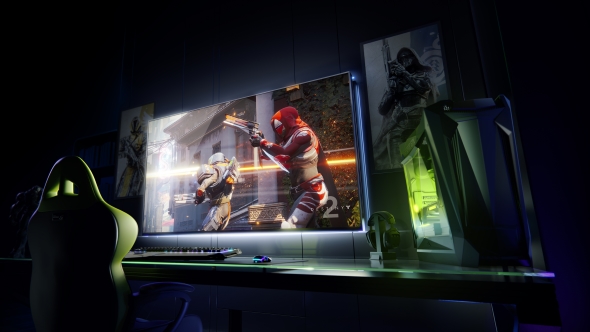 Given the Asus PG27UQ costs some $2,000 (£2,300) for a 27-inch version, it’s rather scary to think just how much the company is going to ask for a monitor with a built-in Shield device, that stretches across 65-inches of screen real estate.

I have been testing a lovely 55-inch Samsung Q9F QLED TV, and plugged into my Nvidia Shield box that does some great HDR PC game streaming on its own. And that’s only about the price of the PG27UQ…