The latest Republic of Gamers Swift monitor is in town to prove its quickdraw credentials as the fastest panel in the west. And the east. Dammit, at 180Hz this thing is super-slick at all points of the compass.

It may be quick but how does the new Swift stack up against the top gaming monitors of today?

I’d only just packed up the stunning Asus ROG Swift PG 348Q, with a single salty tear trickling down my cheek, when the new 24-inch Swift arrived in the office. This $450 (£400) display rounds out the Republic of Gamers monitor range, with the series now offering a 34-inch ultrawide, 27-inch 4K and 1440p models and finally a 24-inch 1080p option.

This 180Hz model has been turning heads in the eSports world too, with the Swift PG248Q being the official monitor of the world’s biggest Dota 2 competition, The International 2016. But I ain’t no pro-gamer, I’m a pro hardware prodder, and this is what I think of Asus’ latest Swift: in spite of all my TN-based prejudices I can’t help but like it.

Don’t have the time for words? Hit the jump-links below to check out the screen’s performance and the all-important out-of-ten score.

The headline spec for the latest Swift is that 180Hz refresh rate. The maximum speed I’ve previously tested was the 165Hz of Acer’s Predator XB271HU and Asus’ PG279Q – my pick as the overall best gaming monitor ever – and sat cheek-by-jowl with a 144Hz screen I could genuinely tell the difference between the two speeds.

I don’t have the luxury of a 144Hz screen in the office at the moment to see first-hand the difference shifting to 180Hz can make, but what I can tell you is that moving windows around the desktop now looks just like shifting sheets of paper around a desk. You will have to mess around in the settings to set it up first time, however, as Asus are offering the top setting via a form of panel overclocking – in the same way the 165Hz screens are ‘overclocked’ from 144Hz.

It’s funny to think of 24-inch monitors being small, but when the top screens are either 27-inch 16:9s or 34-inch 21:9 displays that’s exactly what the PG248Q feels like. But because the new Swift is running at a native resolution of 1920 x 1080 the 24-inch panel is still not small enough to stop the pixel pitch from seeming relatively large. Where a 27-inch 1440p display has a pixel size of 0.233mm the PG248Q comes in at 0.2768mm – that might not sound like much, but it does mean the individual dots on the screen are more noticeable than they are on either a smaller screen or a higher resolution one.

Being part of the Swift range, the PG248Q matches the 180Hz refresh rate by carrying a discrete Nvidia G-Sync module inside it. That gives it access to the top frame synchronising technology around, but does limit its use to GeForce cards. You can, obviously, still plug an AMD GPU in and hit the 180Hz refresh rate, but with no FreeSync support there’s no frame sync for you, Mr. Radeon.

The PG248Q is also sporting the same four-way joystick Asus have used throughout the Swift range; it’s set in the rear of the panel and is used to control the on-screen display and screen settings. It’s an excellent system in a market where accessing the controls for your monitor generally requires the sort of contortions which would have the circus come knocking the next time they’re in town.

There is one thing I’ve neglected to mention so far: the Asus ROG Swift PG248Q carries a TN panel. Yeah. Boo. Hiss. It’s the reason when I first booted up the screen I could almost feel a physically wave of disappointment flowing over me. Twisted nematic (TN) screens are the cheapest and weakest of current flatscreen technologies and, since I’ve been lucky enough to use superior in-plane switching (IPS) or vertical alignment (VA) panels, I’ve vowed never to go back. The TN displays used in the first affordable 4K monitors though were much improved, however the Swift doesn’t seem to have benefited from the tech in those displays. 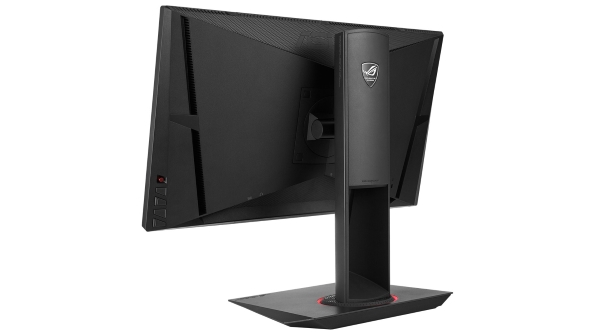 When Ifirstsaw the telltale, washed-out colour palette of a TN screen as the Swift’s screen flashed into life my only hope was that somehow it would eschew the normally high pricing which has accompanied the entire ROG Swift range. At $450 (£400) it’s certainly the cheapest in the range, but that doesn’t make it in any way a budget offering. You can easily pick up a 24-inch 1080p IPS panel for far less than the ticket price of the latest Swift.

So, it’s pricey for a 1080p monitor and carries the weakest screen tech around. And yet there is still something quite lovely about the PG248Q. I was prepared to absolutely hate it for those faded colours and the classically poor viewing angles you always get with TN panels, but as soon as I got in-game I forgot my prejudices.

At 1080p you don’t need a super-powerful GPU to be able to get great frame rates on-screen and with the G-Sync tech pairing up with the gorgeous 180Hz refresh rate the ultra-smooth gaming experience is something to behold. There are six different game modes to use for different content, which go some way to offsetting the TN colour issue. Asus’ electricals have always been pretty damned good in their monitors so it’s probably no surprise to see them able to get a little bit more out of the technology.

That said though, when you put it up against a half-decent IPS display, the disparity in image fidelity is pretty obvious. The contrast levels of the PG248Q are decent, as are the solid black levels, but the white saturation – even at 80% brightness – blows out much of the detail in the highlights. There is also some obvious banding in colour gradients too, with the TN viewing angles being about as poor as you’d expect them to be. 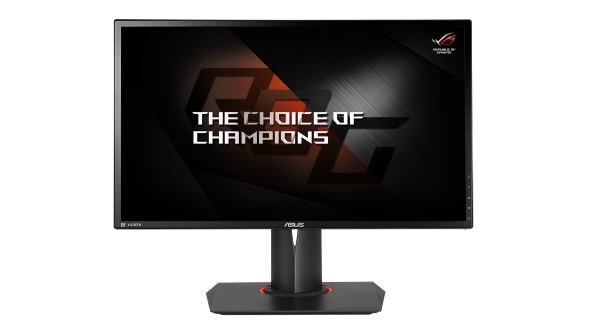 I don’t like TN panels. Sorry, Asus, but there it is. I don’t like their washed-out colour reproduction, the weak viewing angles and the limited dynamic range they offer. That alone should be enough for me to put the Asus ROG Swift PG248Q back in its box and seal it in the nearest landfill. But what I really like are high refresh rate displays, and they don’t come much higher than the 180Hz this monitor is capable of.

And if you want a high refresh rate G-Sync IPS panel you’re going to have to spend a whole lot more than Asus are asking for the PG248Q. Which actually makes this 24-inch, 1080p screen pretty good value at $450 (£400).

That means if you’ve got a mainstream Nvidia GPU, and can’t stretch to the $800 (£700) you’ll have to fork out for the 1440p IPS Swift, the Asus ROG Swift PG248Q makes for a really good little gaming screen. Your games will fly on its 1080p native resolution, and the G-Sync tech, paired with a super high refresh rate, will make them play smoother than a kitten wearing a red velvet jacket drinking warm brandy in a smokey jazz club.