DayZ proves that modding matters. If you ever wanted a demonstration of the power of hobbyist developers, it’s this incredible zombie survival mod for ArmA 2. What was once a strict and careful soldier simulation has been transformed into an open world zombie survival horror show: where the very best and worst of human nature is on display in perma-death worlds.

Dean Hall, DayZ’s creator, is an outspoken proponent of the modding scene. Speaking with PCGamesN at PAX this weekend, Dean laughed when questioned on the importance of DayZ to the PC. “What might make me happiest is DayZ is kind of a big “fuck you” to everyone who said modding wasn’t important.”

Building a mod let Dean develop DayZ without the pressure of a publisher twisting the design to match a product niche. “I read a comment on 4chan of all places,” says Dean. “Someone was asking ‘why is it that one of the greatest gaming experiences I’ve ever had came not from a company but from a mod from some obscure person’. The reply was “well maybe it’s because it wasn’t a product of a billion marketing meetings and stuff like that’. Because it was so isolated the idea was allowed to grow as the idea itself.”

Originally announced in August last year, a standalone version of DayZ was aiming for an alpha release by Christmas. Development would follow “the Minecraft model,” with “fast iterations” based on feedback from the community. This didn’t go to plan. By December Hall had to explain that the team would “rather slip the date […] than ship something that we believe is not ready for a first step”.

According to Hall, the root of the delay to the DayZ standalone was their new inventory system. They’d chosen to strip out the baggy inventory of Arma 2 and replace it entirely. It wasn’t just a matter of altering the old code but a “complete deletion,” says Dean. “In October when we started to do this, we thought it would be okay and we could take the experiment. In December we were feeling the pain. We were worried we’d made a huge mistake.”

“It looked like we were going to have another six months just to finish the inventory system. We basically just commented out the whole inventory system in Arma 2 and then just rewrote one from scratch. This isn’t just the interface – this is all how the objects interact with each other in the world.”

Thankfully, the bet paid off. “We were really lucky in January and it just all came together really nicely in this inventory system […] we can now do proper weapon attachments, we just implemented head torches, batteries, gas canisters, torches mounted on your body, all sorts of crafting opportunities and stuff like that.”

From that point on it was like “the floodgates opened”. 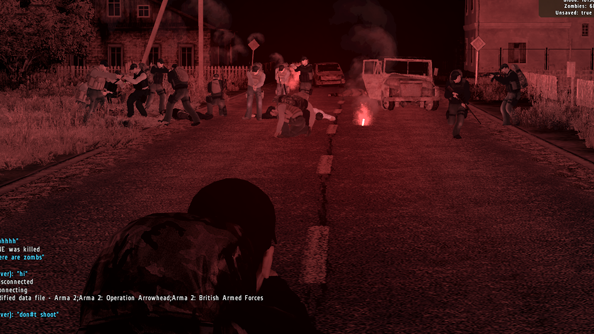 “The last remaining chunk before we do the alpha is the server client architecture,” Hall explains. “What that does is move DayZ from using the Arma 2 engine to essentially just sending your keystrokes to the server. Your client does virtually nothing. That helps with client performance and it also virtually eliminates all serious hacking. The only hacking that can then occur is like aimbotting… we have Valve anti cheat for stuff like that.”

Cheaters have been a constant problem for the DayZ mod. It’s a problem that, Hall joked, even his mum knows about. Shifting to this much more secure server method, if it works, will be a godsend for the standalone players.

The shift to server/client architecture represents “a fundamental change for the game,” says Dean, as it “basically takes DayZ and turns it into World of Warcraft or something like that. If you want more players you just need bigger servers.”

Despite this recent progress it doesn’t look like we’ll be playing DayZ Standalone any time soon: Hall explained that “in June we’re going to review the current state [of the game] and hopefully announce a date for an alpha.”

Bohemia continue to work on DayZ’s controls. Should the game aim for the fidelity of a soldier sim, or reach for looser, but more immersive controls? Hall says that “we’ve got two very different streams and we’ll probably go to the community and say ‘Which one do you guys think?’”

Why not stick with ArmA’s separate controls for lying prone, crouching, standing, walking and running? Although precise, Hall felt they were getting in the way. “There were some advantages to it… like there are some times when you want your character to be a bit slow when doing something, because there needs to be a penalty associated with it.” But that precision created an issue. “We wanted to put the players in the character. That’s our number one design pillar.”

The first change is a significant game tweak. “We’re experimenting with the idea that as you move around your gun is lowered, so you need to actively sight it. We haven’t confirmed this yet, but this is something we’re playing with. And that was to get around the shoot on sight mentality.”

The experimentation won’t stop at launch. In fact, Bohemia are going for a downright odd approach; trying to downplay the game’s popularity in the hope that the servers can continue to function. “Hopefully not too many people will buy it when it first comes out,” says Hall. “We don’t want too many people to buy it straight away, because then no-one will be able to play it. So we’re actually looking at ways to minimise the amount of people who will buy it on release… we probably won’t announce it, it probably won’t be Steam storefronted… it will probably be you’ll have to buy the key through somewhere else, or we’ll work with the Steam Early Access program and stuff like that.”

Development on DayZ Standalone won’t cease once it’s in players hands. Taken with the “Minecraft style” of development, Hall says that “there’ll be another twelve months of development. We’re really focusing on getting the alpha out and then throughout that year we’ll do the new vehicle system, base building, all that stuff.”

If DayZ’s development seems clearly mapped out. What happens afterwards. What does Dean do next? “I have three games that I want to do. I’m probably going to open my own studio, maybe even affiliated with BI (Bohemia Interactive).”Hall wouldn’t say much about the games he has planned, though he would say that “if you look at my interests, I like to make games about things that I’ve done. So DayZ was inspired by my jungle training and stuff like that. I’m really into mountaineering. I want to explore what that could mean for a game.[…] I’m definitely not done with the survival genre, but I’m probably done with zombies for the moment.”

His ideas aren’t all Earth-bound, though. ““I really like space games but I think there’s just so many space games coming out that… You know there’s a game that I used to play called Imperium Galactica 2. I feel like other games that have been spiritual successors and the development team… they’re kind of headed in a different direction to the one I wanted to head. So I’d like to do that eventually… but I wouldn’t do that for a few years, because I think it’s a bit saturated at the moment.”