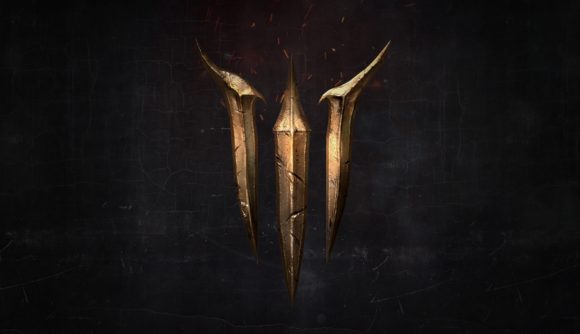 This morning, Larian Studios added a big old roman numeral three to its official website. We – along with everyone else – assumed that this was probably going to be Divinity: Original Sin 3, but it looks like the announcement might be even bigger than that. Source files in the teaser suggest that this new game is in fact the Baldur’s Gate 3 that Larian was rumoured to be working on last year.

If you inspect the source code of the page, you can download the MP4 file of the teaser video. If you open up that video in a text editor, you’ll find multiple references to Baldur’s Gate 3, first as the name of the PNG file of the logo, then as a copyright notice attributed Dungeons & Dragons owner Wizards of the Coast. The details were dug up by kunken on Twitter.

Rumours of a Larian-developed Baldur’s Gate 3 were dug up last year, though the studio told Wccftech at the time that it hadn’t acquired any new IP and was continuing work on Divinity. Apparently. at least the former point has changed.

Whatever the case, expect more information soon with E3 on the horizon. Coming off the roaring success of Original Sin 2, a major Larian Studios title would be a natural addition to any showcase that wants to make a splash with the PC community. That could mean the PC Gaming Show (though Larian is not currently listed among the partners there) or Microsoft’s Xbox presentation.

Check out the official site to stare at the III for yourself.

You can expect the Divinity: Fallen Heroes release date to come a bit sooner than whatever this is, though Larian has yet to nail down a specific launch window for the tactical spin-off, either.

We will, of course, keep you updated on any and all announcement for games with a three in the title. Larian does what Valve don’t, I guess.