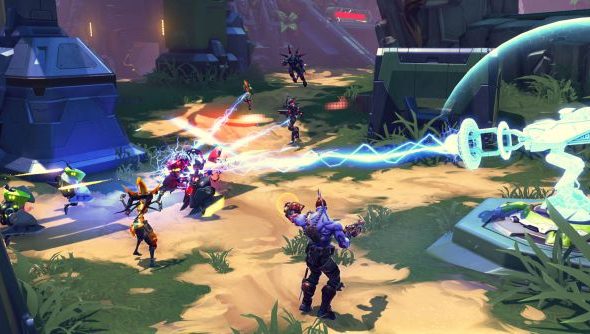 Battleborn sales massively under-performed, but 2K say they’re not quite done with the IP just yet and they plan to continue trying to grow the hero shooter’s audience.

If you don’t fancy Battleborn, there’s plenty of choice in our list of the best FPS games.

You can tell Battleborn failed to hit expectations, since it was going for peanuts in a recent Humble Bundle and still its Steam player count is less than impressive.

Speaking after the financial report from 2K’s parent company, Take Two, company CEO Strauss Zelnick admitted Battleborn missed its sales targets.”While the game launched to solid reviews, its performance in the market has been below our expectations,” he said.

Despite this, they still plan to support the game and try get it to where it needs to be. How? I personally think it will go the way of Evolve and go free-to-play, but here’s the official line:”We think there remains an opportunity to grow the audience for this unique experience over time,” Zelnick explained, “and 2K will continue to drive engagement and recurrent consumer spending on the title through add-on content and virtual currency.”

So they plan to grow the audience (by making it free-to-play, I bet) and then add a bunch of microtransactions, trying to mimic the success they’ve had with GTA Online. It would certainly explain why that 2K Humble Bundle was such great value – a last ditch attempt to claw some money from sales before heading down the free route.

For now, though, it seems like they are just going to rely on content updates that can be purchased with in-game currency.

“So with regard to Battleborn, we’re being very frank about where we are, because we’re a transparent company,” said Zelnick.

“We’re still delivering new content to Battleborn. Audiences love Battleborn. We still have virtual currency coming for Battleborn. We’re not counting it out for a minute. We’re just telling you where we’re at now.”