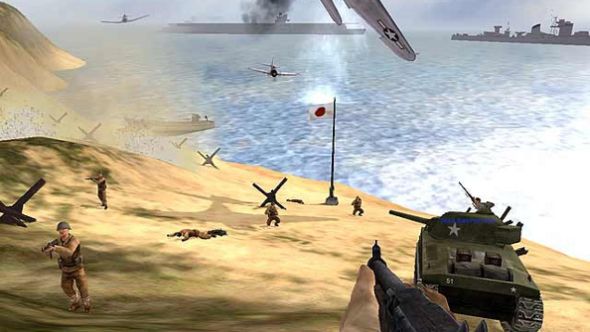 Update March 6, 2018: According to new reports, EA are calling the next Battlefield game ‘Battlefield V’ internally. If this is the case, expect it to be pronounced ‘Battlefield Vee’, just to make things even more confusing.

As well as uncovering the potentially placeholder name, GamesBeat say they have found out some details of how it plays as well.

While you wait, here’s our list of the best FPS games ever made for PC.

First off, this report suggests that Battlefield V will have a co-op mode. In it, you and your squad of friends team up to storm objectives in a Conquest-style mode. It could be a good way to blow off steam away from the ear-ringing explosions of the multiplayer.

Less surprisingly, it will also have loot boxes. It does look like EA have learned from their mistakes with Star Wars Battlefront 2, however, since they will be cosmetic only.

Last up, there’s one tweak to the core gameplay that should give players more freedom. When laying prone, you will be able to twist around and fire while laid on your back. This could be handy in many situations, letting snipers coil around when they’ve been flanked, for example.

As ever, these are rumours and should be treated as such until they are confirmed.

Original Story March 1, 2018: It’s looking more and more like this year’s entry in the Battlefield series is going to be a return to World War II.

GamesBeat cites anonymous sources “familiar with EA’s plans” for the series saying Battlefield 2 will be set during the Second World War. This much at least lines up with rumors we reported on back in December, when popular Battlefield YouTuber AlmightyDaq uploaded a video about DICE’s plans for the franchise.

AlmightyDaq said in his initial video at the time that he had learned DICE were working on Battlefield Bad Company 3, but a couple days later he uploaded a follow-up that claimed there were two Battlefield projects were in the works: Bad Company 3 was allegedly being handled by DICE LA, who have done the bulk of the post-release content for Battlefield 1, with work on Battlefield 2 (set in World War II) going back to DICE Sweden, where the core games have been developed.

While AlmightyDaq’s sources said Bad Company 3 was scheduled for 2019, GamesBeat’s reporting suggests that game – if it exists at all – is probably still a long way off.

However, their sources say Battlefield 2 will be out this calendar year, which almost definitely means late October or November. It would be the first Battlefield game set in World War II since Battlefield 1943 came out in 2009 – on that note, here’s our pick of the best World War 2 games.

We’ve reached out to EA for comment on this story, and we’ll update this if we hear back.