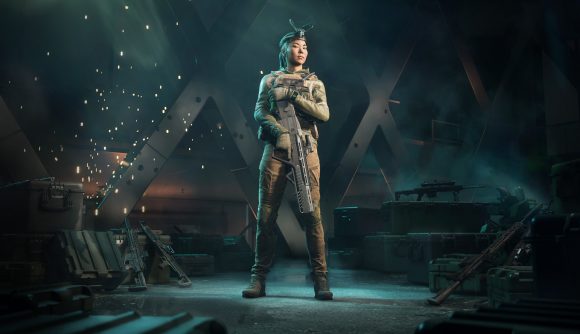 The Battlefield 2042 beta was popular, but rough around the edges. The devs at DICE have published a breakdown of what they learned from the beta, and confirmed that the build of the game that was turned into the beta was a few months out of date. The devs have also shared some information on launch features that were either missing from the beta outright, or will be improved for launch. However, a few features, like in-game voice chat, won’t make it until after release day.

The commo rose, for example, will return from previous Battlefield games, allowing you to communicate through a radial menu of pre-made commands quickly. The compass that popped up when you’re aiming down sights now appears all the time. The ping system has been updated to work more responsively, too.

Support players will be better rewarded in the final game, including score bonuses for transport assists, spawn support, resupply, and heal support. Healing effects will start faster, revives will work more quickly, and Maria Falck’s syrette pistol will now magnetise toward friendly targets and make it clearer when you’re successfully healing a friend.

The HUD’s getting a variety of improvements, including a colour-coded kill log with clearer indications of what’s going on with match events, like flag captures and sector status, so you can pay more attention to the action. Some subtle changes are also coming to make it easier to tell enemies and allies apart.

Big map will be there eventually, but it might not make it for the Battlefield 2042 release date. Once it’s in, it’ll allow you to pop open a big overview of everything that’s going on in a match. Similarly, in-game voice chat is coming sometime after launch. You can get more details over at the official site.

If you’re curious about what Battlefield 2042 guns have been confirmed so far, you can follow that link.