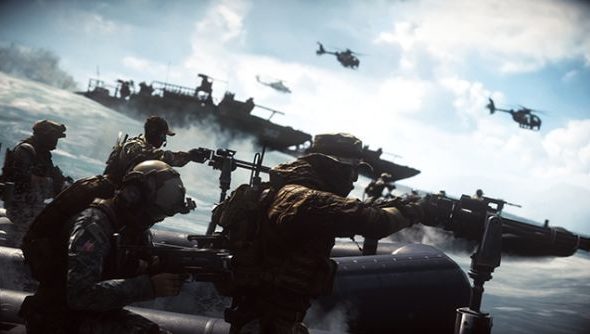 Edit: Origin report that a “small number” of Battlefield 3 Premium members are without the Battlefield 4 beta they’ve paid for. But they’re working on it.

DICE’s exclusive beta for beautiful people is now go, and those of you who’ve preloaded Battlefield 4 ought to be able to fire up the game right now. Arrived too is the BF4 section of Battlelog, the social functionality that accompanies the game.

The rest of us can wait til Friday, by which point – fingers crossed – any teething troubles with servers and their dependent parts will already have been well-gnawed.

If you’ve pre-ordered the new Battlefield, have your Battlefield 3 served Premium, or once bought a Limited or Digital Deluxe edition of Medal of Honor: Warfighter during a fugue state, then you’ve a spot in today’s exclusive beta. Otherwise, you might as well get some work done until Friday, October 4.

You’ll also need to be running a 64-bit operating system and pass the minimum Battlefield 4 PC system requirements to play.

What’s more, exclusive beta players now have access to the new BF4 section on Battlelog. DICE’s Android and iOS apps are available on their respective stores and ready for use in conjunction with the beta.

Battlelog for Battlefield 4 will mean the ability to swap out your weapon on your iThing rather than stare glumly at your ragdoll, and the chance fiddle with your loadout in the bath, as it were. I’ll let you judge the worth of those features for yourself: