Looking for a list of the best vampire games on PC? It’s all Christopher Lee’s fault. Despite the best efforts of Bram Stoker, Max Schreck, and Stephenie Meyer in trying to make them look bad – everyone wants to be a vampire. As The Lost Boys pointed out, “Sleep all day. Party all night. Never grow old. Never die. It’s fun to be a vampire.” And as the videogame industry quickly realized, having supernatural powers of darkness is pretty cool too, which is why there are so many fun vampire games around.

We’ll be charting a course across aplenty of genres and decades to deliver our picks of the PC’s top vampire games. So whether you prefer the power fantasy, roleplaying potential, or moral implications of being a vampire, we’ve got something to suit all tastes.

Being able to jump really high, tear regular humans to shreds, use creepy magic powers, and replenish health by feasting on your enemies – all PC games should be vampire games. To that end, we’ve gone to the heart of Transylvania, to round up all the best vampire games on PC, but watch out – they bite.

Here are the best vampire games on PC: 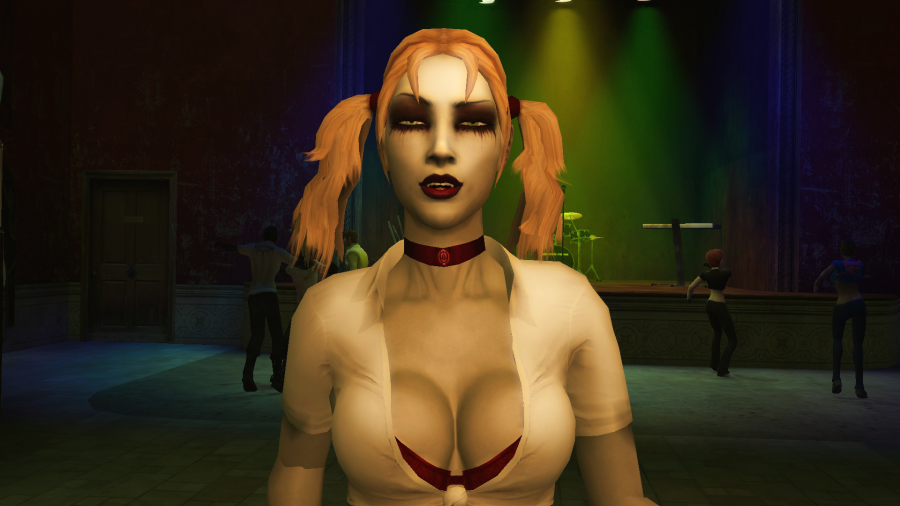 Bloodlines is one of the best PC games – not just in the vampire games genre – that fate and bad business decisions dealt a poor hand to. A rushed release date that put it out on the same day as Half-Life 2, a still relatively unknown developer in Troika, and a list of bugs that would make a QA tester weep. It’s unfinished, but it’s worth playing for one main reason – it’s Deus Ex with vampires, which is a pitch that still makes us swoon.

After picking one of several clans – which alter how the game plays – you’re free to wander around the dark streets of Los Angeles in search of souls to feed on, quests to complete, and to find out why the clans are at each other’s throats (a particularly bad thing for vampires). How you do any of these things is up to you, and it’s all underpinned by the clever rules of the Masquerade. Be a charming Toreador and you can simply persuade thralls to offer their necks to you, but if you’re a hideous Nosferatu you’ll be skulking through sewers in fear of anyone even seeing you. It can be a bit rough around the edges, but Bloodlines has enough fantastic ideas to negate any issues. 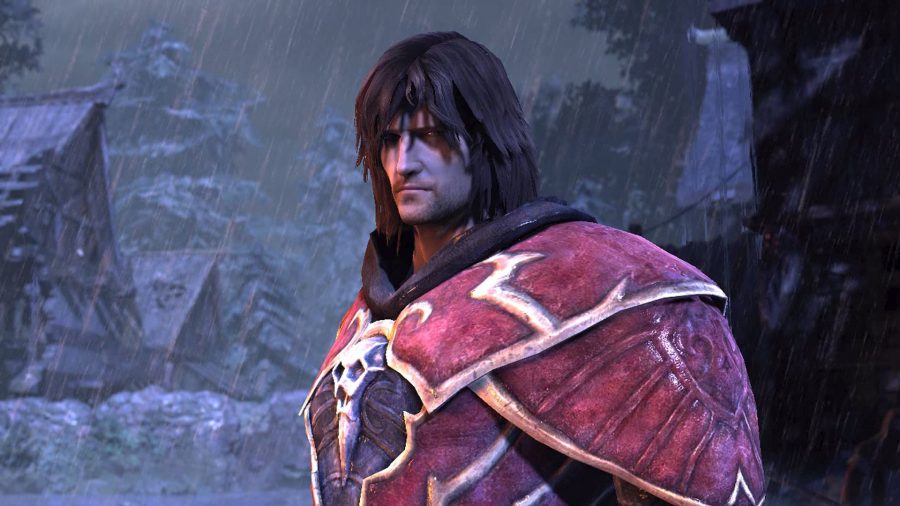 Castlevania is the most revered vampire games saga around, so it’s disappointing just how few titles in the series have actually made it to PC. We’re hopeful we’ll see Symphony of the Night and the other 2D Metroidvania games on Steam before too long, but until then we’re fortunate to at least have the best 3D Castlevania game – which is also one of the best action-adventure games ever made.

The first Lords of Shadow is an action-packed epic, mixing God of War-style combat with frantic, thrilling set-pieces. Players take on the role of Gabriel Belmont and wield a crucifix-chain-whip against the forces of darkness. The action is initially a little button-mashy but soon becomes quite tactical – forcing players to mix between direct and area attacks, dodges, counters, combos, and eventually even magic powers. Better still, in the sequel Gabriel actually becomes Dracula, and you don’t get any more vampire than that. 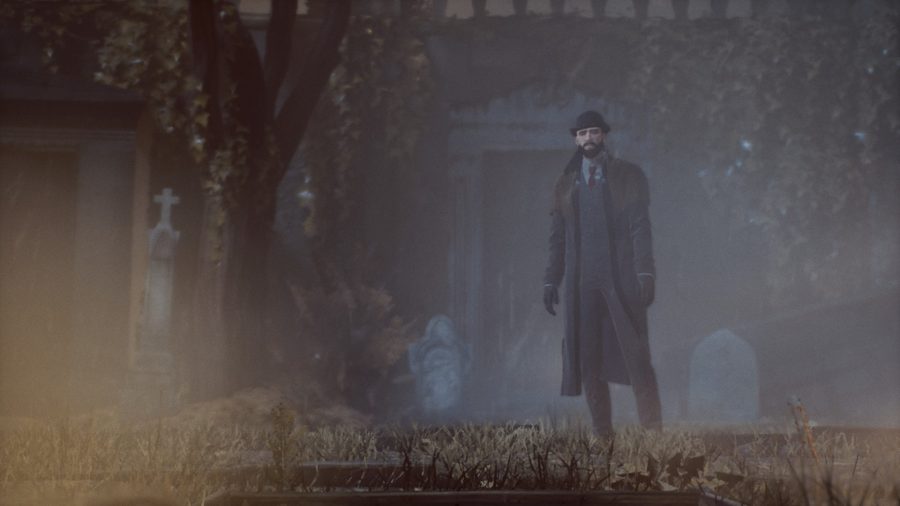 Vampyr, from Life is Strange developer Dontnod, focuses on telling an emotional vampire story – and it’s an adventure game mixed with Dark Souls-inspired combat. For a large chunk of the game you’re talking to the residents of London, finding out the source of the epidemic in the city, and forging new relationships, while the rest of the time you’re fighting vampire hunters and werewolves in the misty streets.

In the shadows: The best ninja games on PC

Oh, and occasionally murdering a close friend. The coolest thing about Vampyr is in choosing your victims. You could rely on rats to get your health back, never killing anyone, and be grossly underpowered for every combat encounter. Or, you could prey on the folk who’ll never be missed. Gain their trust, complete missions for them, bring them to the healthiest, most hopeful, and most alive they’ve ever been – and then rip their throats out. You’ll get a lot of XP, but you’ll feel dead inside. 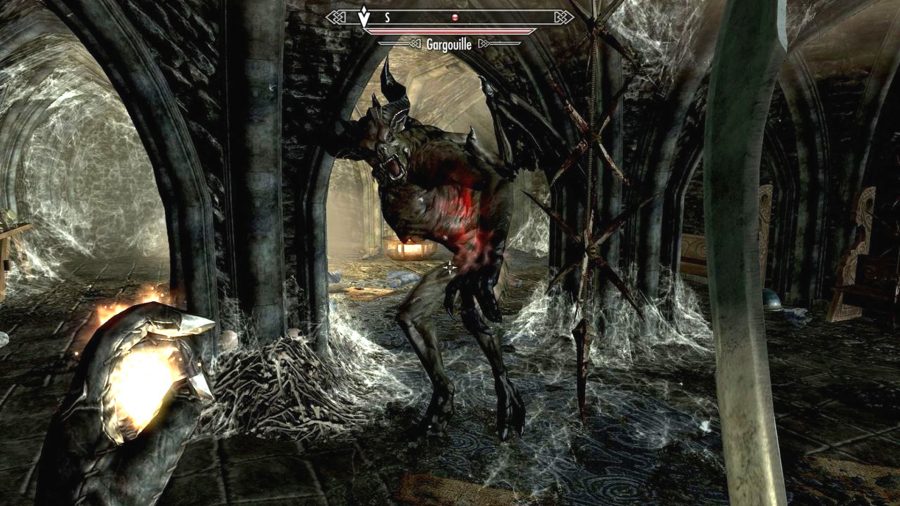 The appeal of Skyrim is that you can choose who you want to be. A melee-focused barbarian who can punch dragons to death? A mage who can blow apart giants with fireballs? Nah, you want to be an undead vampire lord of the damned, feasting on the Nords and only travelling by night. With great bonuses like being immune to disease and poison, and a large bonus to spell damage, Skyrim can be the ultimate vampire RPG.

The Dawnguard expansion adds even more to this fantasy. This Skyrim add-on is entirely based around vampirism – with a legion of nosferatu called the Volkihar Clan seeking to fulfil a prophecy from an Elder Scroll, while being hunted by the titular Dawnguard vampire hunters. Even better, players can become a Dracula-like Vampire Lord, with a new skill tree and a range of new abilities – such as moving super-fast or pulling an enemy towards you. Yes, you can become a vampire Jedi in Skyrim – no Skyrim mods required. 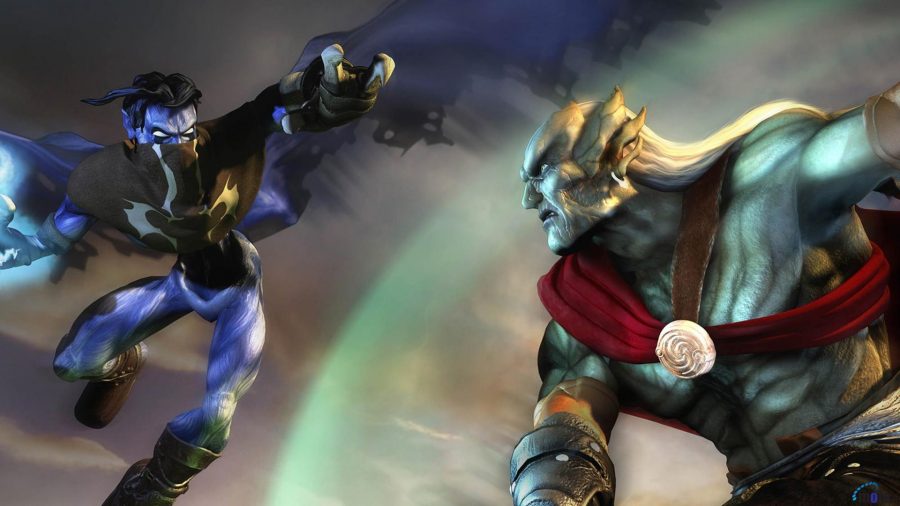 Outside of the Castlevania series, the Legacy of Kain games are some of the most popular vampire games around. There were five games released between 1997 and 2003, and while the Soul Reaver games are particularly enjoyable, we’re plumping for the final game in the series for this list – Legacy of Kain: Defiance, which was specifically developed to bring all the disparate storylines together.

Even in terms of gameplay, Defiance successfully melds both of the differing Blood Omen and Soul Reaver styles – with both series protagonists playable, leading to two wildly different and equally enjoyable experiences. There’s more enemy variety than previous games, and it’s more action-packed too – although there are still a few puzzles in the mix. The story is lots of fun thanks to sharp writing from Uncharted creator Amy Hennig, so the Legacy of Kain series went out on a high. Why haven’t we had another one in the last 15 years? 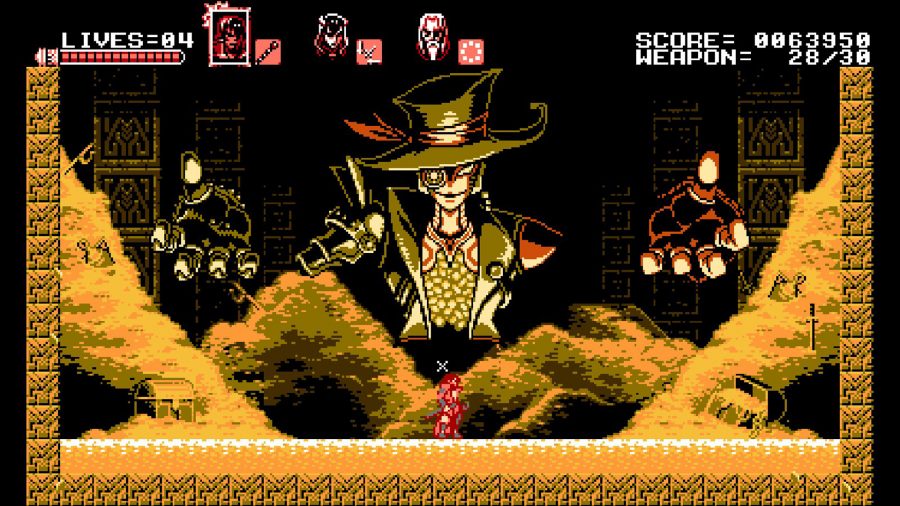 Bloodstained: Curse of the Moon

In the inexplicable absence of any of the great 2D Castlevanias on PC, the Bloodstained games – lead by former Castlevania series producer Koji Igarashi – are probably our best bet. Only the first game, Curse of the Moon, is currently available – but luckily it’s fantastic. It’s essentially a modern NES game, with neat gameplay ideas and amazing boss battles.

While the gameplay is akin to the first Castlevanias – platform-action games with limited special weapons and lives – Bloodstained: Curse of the Moon significantly tweaks the formula by having multiple player characters, all with different abilities. Zangetsu is tough but close-range only, Miriam has a longer reach and can roll, Alfred has magic powers but a poor attack, and Gebel can attack upwards and turn into a bat – yes, he’s a vampire. You have to use all these characters and their various abilities to get ahead, and it makes for a challenging and enjoyable game. Not just one for fans of retro games, after all. 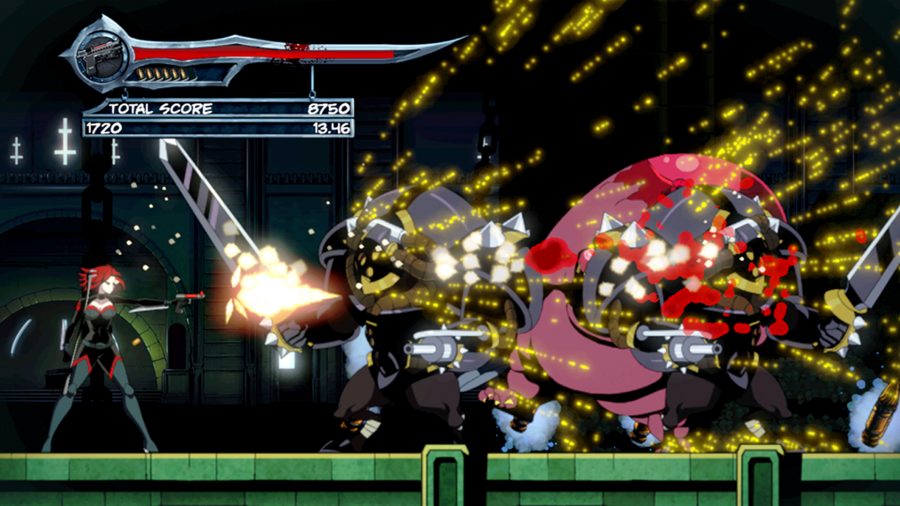 Despite having a fantastic premise – kickass vampire vs. Nazis – the 3D Bloodrayne games were never as good as they could’ve been. As it turns out, all they needed in order to turn Bloodrayne good was make it 2D and give the series to the action-platformer specialists at WayForward.

Bloodrayne Betrayal is side-scrolling action game, but let’s call it what it really is – it’s a 2D Dark Souls. It can certainly be tough, especially with the sheer amount of enemies thrown at the player – if you like challenging games Betrayal is for you. It’s never impossible though, as you can always suck an enemy’s blood to get health back. It also looks gorgeous, with timeless comic-book style and excellent animation. It’s so satisfying to cut a vampire in half and stomp on its head. 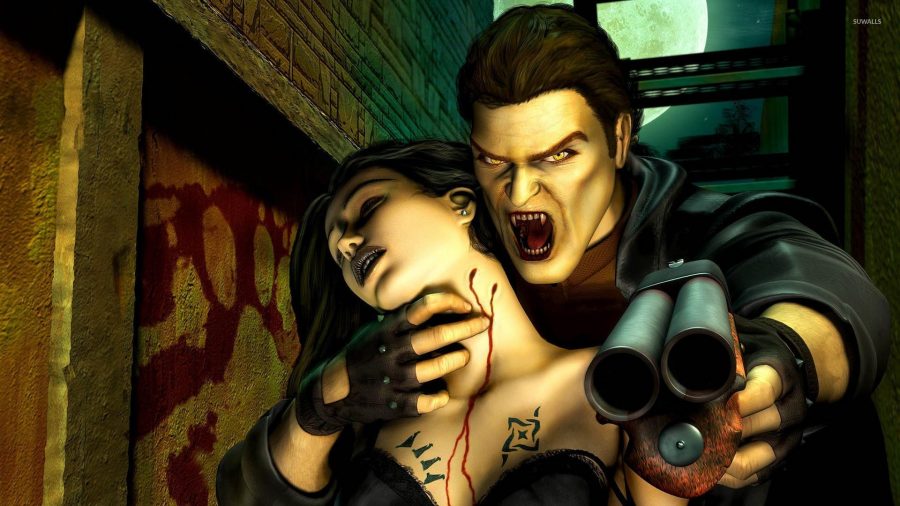 While Bloodlines is the Vampire: The Masquerade game everyone talks about, earlier title Redemption should not be dismissed. They’re very different games, for starters. While Bloodlines is a vampire Deus Ex, Redemption is closer to Diablo or The Witcher. It’s not so much about the combat as it is pushing forward against the odds, strategically dealing with enemies, and scouring new areas for all the loot you can carry.

The story sees players taking on the role of doomed crusader Christof in 12th Century Prague, hunting the vampires threatening the city before becoming one himself. The story’s fun, if full of 2000-era videogame voice acting – but the real shock comes when the story cuts to 800 years later and players get to travel to modern-day New York. This completely transforms the game from a classic medieval-fantasy hack-and-slash, to a cross between Diablo and, well, Vampire: The Masquerade – Bloodlines. It may have released a while ago, but there’s still life in Redemption, and it’s one of the best old games on PC. 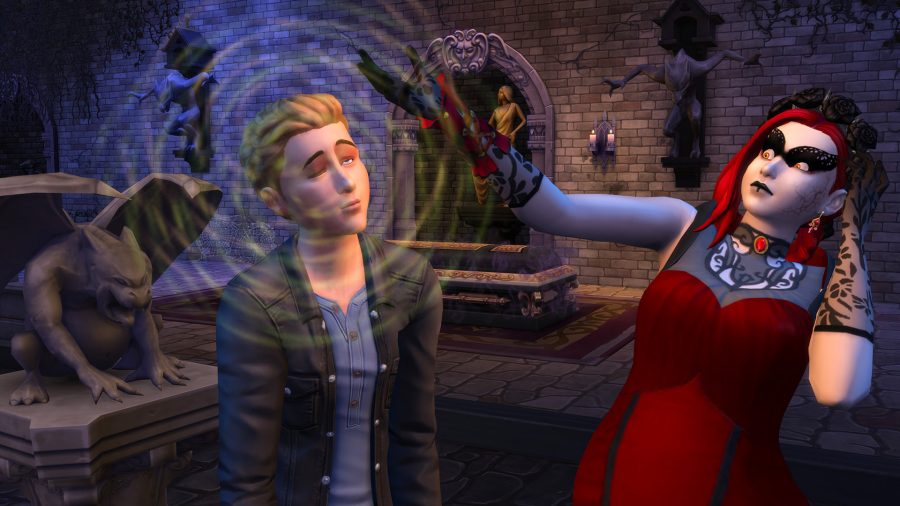 The Sims has always embraced the occult, though it definitely took some time to ramp up to the Sims 4 pack. The Sims 2’s Nightlife expansion adds a downtown area to the game with such wholesome fare as bowling, karaoke, and getting turned into a vampire. This was taken a step further in The Sims 3 expansion Supernatural – which was more specifically built around creatures of the night. With this add-on, you can turn your home into a proper Castle Dracula – gothic furnishings, secret passageways, sinister laboratories, and of course, a crypt for your undead family’s coffins. It’s fun to manage vampires.

The Sims 4 has gone all in with the Vampires expansion, allowing you to live as a vampire right from the beginning. Vampires live very different lives compared to their human counterparts, from the vampire’s mysterious Dark Farm looks to their unique powers which can be enhanced by winning duels against each other. If you’re looking to get your vampire fix in a management game, no other expansion does it better. 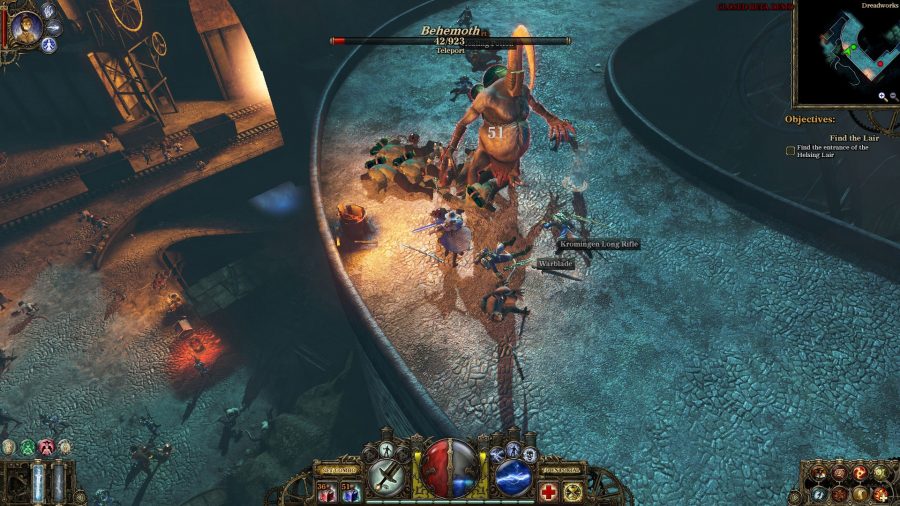 The Incredible Adventures of Van Helsing

We’re heading to Diablo-town with this trilogy of adventures based on Bram Stoker’s Dracula, where you play the most famous vampire hunter of them all: Van Helsing (although sadly not the one played by Hugh Jackman). Set in a twisted take on 19th Century Europe, the Van Helsing games sees the titular character – son of the famous hunter from Bram Stoker’s novel – continuing his father’s mission by seeking out and destroying monsters.

What we get is a trilogy of action-RPGs that are hugely inspired by Diablo, but still manage to hit all the good points from Blizzard’s hyper-addictive games. Frantic combat, entertaining monsters, interesting loot, and always feeling compelled to seek out what’s just around the next corner. If you’re tired of waiting for Diablo 4 – aren’t we all? – The Incredible Adventures of Van Helsing is a fun alternative.

These are the best and most bloodthirsty vampire games lurking on PC. Whether hunting locals down back-alleys, building the crypt of your dreams, or going on epic quests to purge Eastern European countries of the undead hordes – all the best games have vampires in them. We hope we’ve settled the argument once and for all: it’s fun to be a vampire. Now if you’ll excuse us, we’re feeling thirsty and those necks won’t bite themselves.