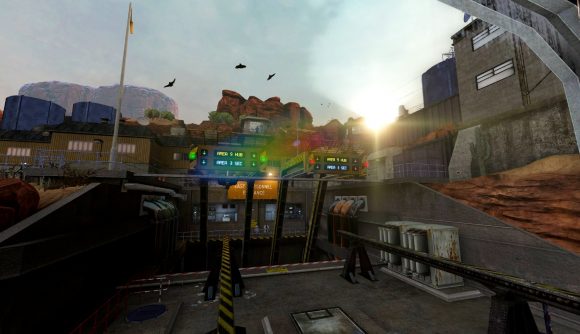 We were excited last month to see that a new group of modders is taking up the project of recreating Half-Life: Blue Shift in the lovingly modernised Black Mesa, and now the introduction is available to play. Black Mesa: Blue Shift’s first chapter, which involves another long tram ride deep into the heart of the Black Mesa Research Facility, is now accepting passengers.

HECU Collective, the group of modders building the mod, says it will be releasing Black Mesa: Blue Shift chapter by chapter as they’re completed. The first, Living Quarters Outbound, is downloadable from ModDB now, and it’s a nice peek at the enhancements coming to the original expansion.

Admittedly, Blue Shift starts out in much the same way that Half-Life did, and there’s not a lot to do on the ride from the living quarters area to Barney Calhoun’s unassuming little Security Station 3 desk other than to gawp at the shiny new textures and lighting. But there’s plenty to look at: pipes shine, the headlights on other tram cars create realistic glows and coronas, and there are re-recorded voice lines to overhear as you head in for what’s meant to be a normal day at work.

Unfortunately, things cut out just as you’re about ready to step off the tram, so we’ll have to wait a while before we get any real Blue Shift action. However, HECU Collective says it’s eager to hear feedback from players.

Once you’ve downloaded the file, installation is as simple as unzipping it and dropping its contents into your Black Mesa root directory. You can launch the mod by double-clicking bshift.bat in that folder (or by adding the parameter “-game bshift” to Black Mesa under launch options in Steam).

For more of the best old games you can still play on PC today, just click the link.